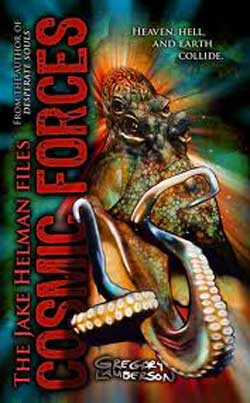 Heaven and Hell. A private eye who’s had enough with supernatural phenomena. This is the third volume in Gregory Lamberson’s Jake Helman Files series and boy was this one hell of a read! Having read Gregory’s previous novels, I knew what I was in store for with the third volume of his supernatural horror private eye series. Gregory manages to take a turn and pay a certain homage to H.P Lovecraft by creating a monstrous villain that gives the Great Cthulu a run for his money. The characters themselves, were beyond real.

They came off the pages with lives of their own. The villains in the book were beyond evil, if such a thing were possible for these seven guys in Cosmic Forces. I don’t want to give too much away, for readers who’ve read Gregory’s previous Jake Helman files’s novels, Personal Demons and Desperate Souls, you will not be disappointed in the latest adventure our favorite private eye, Jake gets himself into.

You can’t help but wonder if this guy ever gets a break. He’s fought a supernatural serial killer, he’s gone up against an old man who’s created something that fails in comparison to your average evil organization, he’s shot his way through zombies and now, he deals with something he doubts he’ll survive from.

The supernatural aspect of the novel works fine, the pacing is good. The situations the protagonist finds himself in, although seemingly impossible to overcome, he manages to go fighting through it and coming out as the survivor in the end. It seems with a character like Jake, you feel that he’s somewhat more than a private eye, that somewhere inside him, there’s this force that just will not stop until he does what he feels is right. Jake is not greedy, although he’s stumbled upon a roadblock: temptation. He does manage to get around that roadblock.

If you’ve read the previous two novels, old characters make a return. Some good and one that is just plain cruel and evil. mThe action taking place in the novel is everything a reader of dark fantasy and horror would come to expect from such a novel. It’s fast and happens so quickly you may need time to go back and reread a few paragraphs where Jake is battling against seemingly impossible odds. The nod to H.P Lovecraft is a good one. I enjoyed reading elements within this latest volume. I’m eager to find out what else is in store for Jake in the next novel. Gregory has a knack for telling imaginative stories, from his work on Slime City, to his novels, it’s no wonder that he has a talent for not just writing, but visually showing us just what goes on inside his twisted imagination.