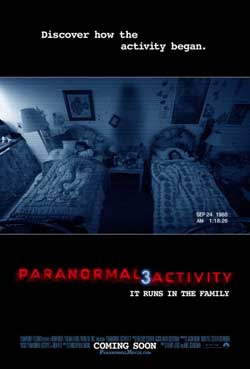 In 1988, young sisters Katie and Kristi befriend an invisible entity who resides in their home.

Has it really been four years since the “Paranormal Activity” franchise began? It seems like I saw the first entry just last year but it was back in 2007 when director Oren Peli made a whole lot of people fearful of using their camcorders as they slept. Three years later, we got a dose of some more videotaped weirdness with “Paranormal Activity 2” which played as something of a prequel to the first film. Now we get “Paranormal Activity 3”, which takes the story of sisters Katie & Kristi way back to the beginning. Back when they were young girls & shows how they got hooked up to the entity that dogged them through the first two films.

The film starts innocently enough with the adult Katie (Katie Featherstone) & Kristi (Sprague Grayden) in happier times, before their worlds got turned inside out in the previous two films. Katie has some boxes for Kristi to store in her basement as a favor to her for awhile. The boxes are full of videotapes that their parents had recorded of them when they were youngsters. Both Featherstone & Grayden make only a token appearance at the beginning of the movie to set up it’s premise so if you’re going expecting to see more of them get those thoughts out of your heads right away. As Kristi goes through the boxes & finds the videotapes she begins to reminisce back to her childhood…. 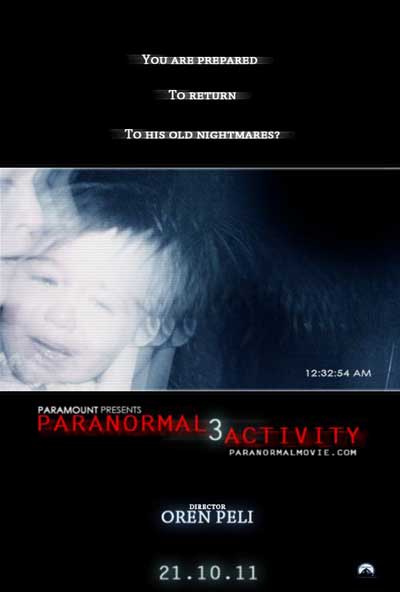 Which takes us to the city of Carlsbad, Ca. Where Young Katie (Chloe Csengery) & Kristi (Jessica Tyler Brown) are moving into a new home with their mom, Julie (Lauren Bittner) & their stepdad, Dennis (Christopher Nicholas Smith). The first 2/3 of the movie are actually quite mundane. We get the birthday parties, the joyful back & forth between a young couple in love, the bond between the two sisters, etc…We also get the disapproving mother in law (Aren’t they all disapproving in one way shape or form)? Who claims that the girls belong with their “Father” despite Dennis’ obvious love for both of them. Dennis, you see is a wedding videographer, which is a nice way for the script to explain why he has all of these clunky videocameras all over the place (The film takes place in 1988). But apparently he doesn’t make a lot of money doing his job so we’re led to believe that Julie pays for most of everything although we’re never told what it is she does for a living.

The film ratchets up during a sequence where the couple decide to videotape themselves having sex. Unfortunately, an earthquake derails their plans just as they get heated up & as they run out of their room to get the girls they leave the camera running. It captures some dust falling from the ceiling, nothing unusual there. But the dust seems to take a shape as it falls. It’s landed on someone or something. And that thing was in the room watching the couple. The dust seems to form a set of broad shoulders before it’s shaken off by whatever it landed on. Dennis notices this the next day as he reviews the footage with his assistant, Randy (Dustin Ingram). Randy sees it as well & both seem rather excited at the prospects of what this phenomenon could actually be. 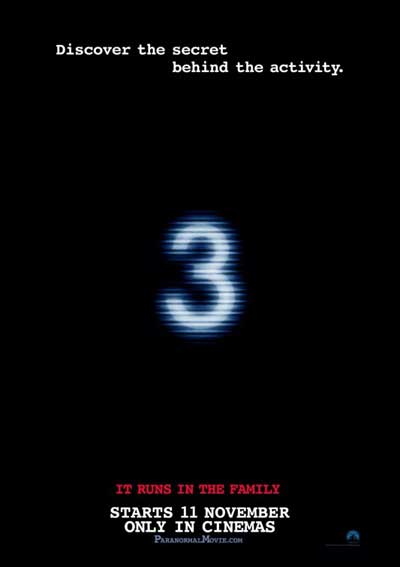 So with some help from Randy, Dennis sets up a camera in his bedroom to record any oddities that might be taking place while they’re asleep. He also sets one up in his daughters room for the same purpose. All of them have been hearing odd sounds at night, which could just be the house settling in. But we know it isn’t, we’ve been down this road a time or two already. In addition he Gerry rigs an oscillating fan with a camcorder as well & sets it to slowly pan left to right in a room facing their kitchen/front doorway area. It’s this camera footage that the film gets the most mileage from.

From then on, you can figure out most of the rest of the plot. The biggest differences are the friendship Kristi develops with a being no one can see but her that she calls “Toby” & a surprise ending that kinda proved to me that the screenwriters realize they’ve milked the original premise for all it’s worth & are attempting to move into a different direction for the next entry in the series (There will be a “PA4” people. Get used to the idea now). What’s fascinating about these films is that the hoary premise that I didn’t think would go past one film is still effective in it’s third iteration. There are those to whom this film will not scare in the least. I understand that and I’d just like to congratulate these clowns. The Black Saint for one has found the third entry to be the scariest one of the series, bar none.

There is a palpable tension in the theater when you see any of the “Paranormal Activity” films. The audience finds itself staring blankly at the screen as if hypnotized, watching the video footage and scanning the screen for something that might be there. Or maybe they thought they saw something only to find it gone a half second later. Was it there at all? Is anything going on as we watch the footage? Ask 10 different people & you’ll get 10 different answers. There’s a exhilarating simplicity to the whole exercise, one that still manages to scare the f*ck out of us even though we know it’s coming. 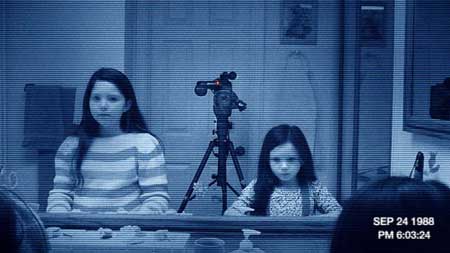 And although directors Henry Joost & Ariel Schulman (Why this took two directors to put together I’ll never understand) seem to want to go with the very cheap “Jump Scares” in the early going but the script by Christopher B. Landon painstakingly builds up the tension as the parents begin to bicker over what is & isn’t real and Toby is becoming far more aggressive as Kristi refuses to do something he’s telling her to do. What’s he telling her? We have no clue but scenes of Kristi having conversations with Toby are very unnerving…and they’re all on videotape for her stepdad to review the next day. Once Toby decides that enough is enough & he wants to make his presence known, he does so in a most satisfyingly chilling fashion. Toby don’t play…

Eventually, the beleaguered family ends up at the in-laws home where the last 10 minutes of the film take place. Here is where the script gets flipped a bit in preparation for the next entry in the series. I won’t tell you where it seems to be headed but I will say I’m not too crazy about it. It seems forced & has a bit of the “Been there, done that” mentality that a lot of these “Found Footage” films have. But you can say that about this film as well. I mean it is basically more of the same premise: Spooky sounds in the night, curious people set up cameras to record the action as they sleep & the ensuing mayhem that follows. But f*ck me this sh*t still works when done right and it’s done right here. As the film drew closer to it’s ending I & the rest of the audience were properly freaked out at the goings on.

This is the most violent of the “PA” films by far but it’s not a gore fest either. There’s just more mayhem on the screen & a really nasty scratch on one characters torso. But it does turn up the violence from the first two entries & does so with terrifying success. People get flung back & forth (Kids too)! Furniture practically explodes & Sheets have minds of their own (You gotta see it to know what I’m talking about). The talked about “Bloody Mary” sequence that’s featured in the trailer/commercials for the film isn’t actually in the film. What we get is another similar scene with two people trying to invoke “Bloody Mary” but with far more horrifying results. I feel no shame in admitting that I was squirming in my chair as this scene took place. Audience members were screaming at the top of their lungs. I love the feeling that a really effective scare scene has on people. The difference here is that people usually laugh after the scares are over. Here, no one was laughing afterwards. The audience just sank back into their seats, fearful of the next scare coming to punch them in the face. 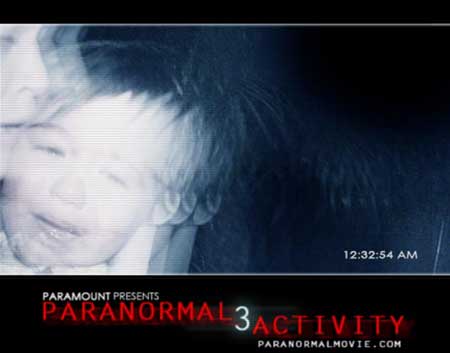 There are plot holes of course, but you’ll be too intent on prepping yourself for the next shock to think about them much. The fact that there is no soundtrack to the film only makes it that much more effective so plot holes aren’t something to care about here. “Paranormal Activity 3” proves that although plot is a shopworn one for sure, it’s still effective if presented as it is here. My only quibbles are it’s ending which feels tacked on & cheap and it’s slow beginning. But I can write that off because it leads to bigger & better things. All performances are effective & the film looks great as well. It rates Four shrouds from The Black Saint, I know there are those of you who will disagree but you know what? I don’t give a flying f*ck what you think. I’m not reading your review, you’re reading mine. This movie is so much better than I expected it to be & it should be seen on a big screen in a packed theater to get the maximum effect from it. Even if you end up not liking it…you will be scared for a second or two. I guarantee it.