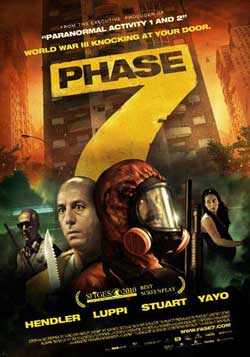 Inside a quarantined apartment building a man must protect his pregnant wife from his new neighbors.

Phase 7 although fiction, may not be too far ahead if you believe the theorists out there. This science fiction release paints a near future apocalyptic time when a viral outbreak has spread over 7 countries. The virus continues to grow and has fatal affects on those who become infected. But, no, it’s not a zombie film or violent rampage kind of delivery. The infected do fade off and die, which changes the way the world operates, though this is never really as extreme as previous cinematic presentaions would suggest.

Now this concept is certainly not new, and in fact has become sort of status quo in the sci fi area as of late. Though it does borrow from several of its predecessors which include “The Crazies”,”Omega Man” “Shaun of the Dead”?….. and well the list goes on.

The movies stars Daniel Hendler as Coco, husband to his pregnant wife Pipi (Jazmín Stuart). The movie begins on a calming note, as they finish off grocery shopping. While on route home, they begin to pass a mass of people rushing for supplies and rations. This oddly doesn’t strike home until they arrive back at their apartment and turn on the local news. Through newscast, we are told about the outbreak, and that several residents will be put under quarantine. Not too shortly after the apartment residents are called to the front of the building and told that the entire building in now being quarantined. The building is blanketed in plastic as the local enforcement units begin testing for signs of illness. Martial law has taken over Argentina.

All seems to be taken somehow lightly at first with only a minor annoyance brought on by the protocols. Though the action begins to transpire under the plastic as tenants become paranoid and start plotting against one another.

This Argentina filmed movie has aspects that took me back a ways. For one, the music which I kind of found annoying is almost a retro replica of the “Escape from New York” soundtrack. That humming, repetitive beat-induced-march fell somewhere between early 80’s and a homage to “They Live”. The other thing that struck me odd, was the choice of names used. Pipi wines maybe one too many times calling out “Coco” to the point of being overused and comical. “Coco….where’d you go, Coco???” I suppose its Argentinean background provided the quirks that you wouldn’t find in western films. We get the sense that all of this combined with the relaxed attitude towards martial law is meant in a comedic way.

As the quarantine remains, the neighbors start to fear that their neighbor Zanutto (Federico Lupp) might be infected due to his excessive coughing. This paranoia divides the tenants into those bent on quarantining him to the 4th floor and those who just want to leave things alone. Zanutto, who senses a potential threat, begins to shoot everyone he can find in the building per loaded shotgun. The act comes at a surprise as we quickly get into scenes with heads being fired clean off and innocents being fired at point black range.

“Phase 7” has a specific sort of feel that reminded me of Italian films such as “Cemetery Man (1994)”. I’m not sure why, though it has a way of being quirky, somewhat clumsy and encased in a familiar retro style shell. It has a hidden agenda which is to play off of the “New World Order” paranoia. This is overheard several times in the background while the TV continues to play. “Phase 7” says without coming out literally, that the NWO might be associated with the sudden outbreak. If you tune into conspiracy show, then this idea is not a surprise. Perhaps Phase 7 is intended as a wake up call. My perspective on this falls into one word..preparation.

As a whole, I can’t call this a great movie, as it tends to movie a little slow. I will call this an OK movie, which means it has a way of being quirky and odd at times, but not action field terror like you would expect from the recent “Crazies” remake. “Phase 7” attempts to be humorous but loses something in its English overdubs. I’m guessing that the subtleties might be recognized more in the full Italian presentation than the western version translation we are presented with. I recommend rental over purchase. 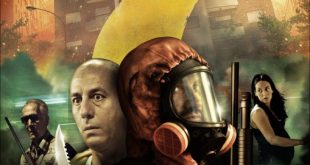