When 16 year-old Jamie begins a friendship with a charismatic man, his world becomes threatened by his loyalty and fear of his newfound father figure, John Bunting: Australia’s most notorious serial killer.

“Snowtown” is not a horror film but does deal with a true life situation that was pretty damn horrific. Based on the “Snowtown murders” case (also known as the Bodies in Barrels murders), this is one of those films that really does pack a punch. Bleak and depressing, the film is hard to sit through (mostly due to the subject matter, partially because it feels 20min too long). First time feature director Justin Kurzel dives right into the shallow end of the pool and takes his time coming up for air. With a cast of mostly unknowns, he delivers a shocking portrait of Australia’s most notorious serial killer.

Sixteen year old Jamie (Lucas Pittaway) lives with his mother Elizabeth (Louise Harris) and two younger brothers. Where they live isn’t exactly the best place for three young boys to grow up. They are surrounded by filth, drugs, and pedophiles. The boys are abused and raped, on more than one occasion. Then along comes John (Daniel Henshall) who treats the younger siblings as sons, and Jamie an adult. They respect John and like him, so much so that Jamie can’t believe it when he finds out that his newly found father figure is a cold blooded killer who targets people that he believes deserving. John tries to draw Jamie in to his gang, forcing him to watch, as well as help to dispose of bodies. As John grows increasingly vicious, he finds it much more difficult to participate.

The thing about “Snowtown” is that it really isn’t pleasant to watch. There are moments of prolonged torture that in the context it is presented, as a true story, it is much more difficult to deal with than usual. This is a well-documented case that occurred from 1992 to 1999. I’m not sure exactly how close, though I did research the case a bit after viewing the film and it was pretty damn close. As intriguing as the film is, my main issue is that the film felt overly long. I wouldn’t say that I was ever bored, just that there should have been a few nips to take out some of the drag in a few overly long sequences. 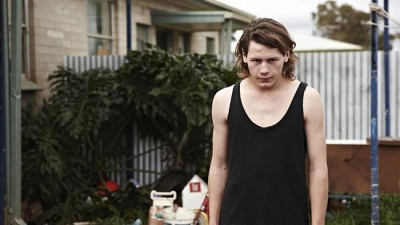 One thing for sure about this film, Daniel Henshall is freaking terrifying. His performance is so convincing that you believe that he IS John Bunting. The way he flicks the switch from the sadistic to the caring father figure is incredible. Much like Eric Bana launching his career with “Chopper”, “Snowtown” is going to be Henshall’s launching pad. Lucas Pittaway’s portrayal of Jamie is sweet and vulnerable. When he is forced to be an accomplice, he loses that, and we as an audience lose a piece as well. During an extended torture sequence, it is almost hard to distinguish between who is actually being tortured, Jamie or the handcuffed victim. The entire cast really is superb and they are invaluable in creating such a strong picture. It will be interesting to see where Justin Kurzel takes himself as a filmmaker after this one. Such a strong debut feature that his sophomore effort could really blow us away.

It’s a shame that we have to live in a world where there is so much violence. Thankfully there are a few directors out there that aren’t afraid to show us how despicable many of us have become. Most of us don’t want to see it but maybe we should. If we see it with our own eyes, maybe we can prevent things like this from happening. I’m giving “Snowtown” **** out of 5 stars. I would have given it 5 if it hadn’t been for the films’ pacing issues. Not for everyone, this is a dark slice of reality that quickly draws you in. A hard-hitting, harrowing film with some truly career defining performances that NEED to be seen. John Bunting is a horrifying character, amplified by the fact that he isn’t just a character, he is real.