SYNOPSIS:
“A series of strange deaths takes place in London. All are accidents but the victims are single men with no family and they all have a link to a life insurance company run by the mysterious Doctor Orloff.” (courtesy IMDB)

REVIEW:
This week’s film is the classic thriller The Human Monster (1940), otherwise known as Dark Eyes Of London, and just remember, as this film was made in 1940 in England, all the good actors were on the Western Front defending the free world from the Nazis, which is why this film only stars bally cowards, Americans, and Bela Lugosi. The first thing I should say about The Human Monster is that it was the first film to receive a ‘H’ certificate for Horror in England. Up till then they were all rated ‘O’ for ‘Orror. By the way, The Human Monster is the American title. The original title is The Dark Eyes Of London from the Edgar Wallace novel of the same name. But we’ll get back to Edgar later. 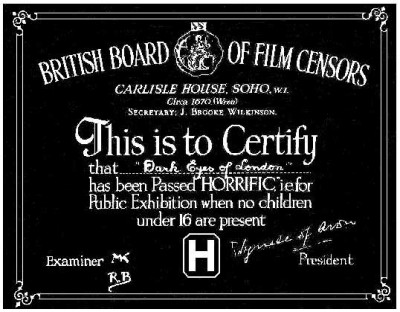 It was directed by Walter Summers who had suffered the indignity of having his films afflicted with American re-titles throughout his career. His last film, At The Villa Rose (1940), became House Of Mystery in the colonies, whilst Traitor Spy (1939) transformed into The Torso Murder Mystery, and McGlusky The Sea Rover (1935) became Hell’s Cargo. You may remember Hugh Williams who plays Detective Inspector Holt, but you’d be lying to yourself. He’s better known as a playwright. That’s how good his acting is, he had to start writing his own material. His son Simon Williams was in the Doctor Who story Remembrance Of The Daleks, so at least the Daleks remember him…or his son. 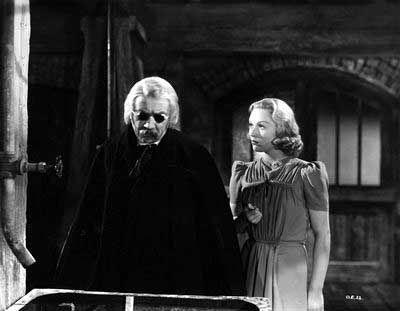 The heroine is played by Greta Gynt who is peerless, or rather she named herself after The Peer Gynt Suite. Her original name was Vauxhall, but she changed it when people confused her for a car, and took her for a quick spin around the block before filing off her serial number and leaving her as a burnt-out wreck on council grounds. Her presence illuminated such films as The Arsenal Stadium Mystery (1940), Tomorrow We Live (1943), and Bulldog Sees It Through (1940). But her career snuffed out in the sixties when the British film industry could finally afford Klieg lights. Edmon Ryon, who plays the yank cop, had a long television career from Bonanza through 77 Sunset Strip to Mod Squad. His last film was Tora! Tora! Tora! (1970) about an attack on Pearl Harbour by Rabbinical scholars. 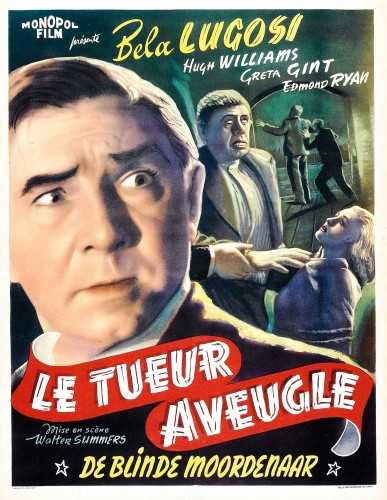 But the real star of this film, and also the film’s connection with King Kong (1933), was Edgar Wallace. Wallace wrote the criminal novel Dark Eyes Of London, which was filmed again as the German film Die Toten Augen Von London aka The Dead Eyes Of London (1961). There’s been about 160 adaptations of Edgar Wallace stories, unfortunately he died in 1932 before he could finish the first draft of his most famous creation, King Kong. He was better known in Germany – his son moved there in the sixties and made a series of Edgar Wallace films known collectively as Krimi or, in English, crap. Edgar Wallace had an interest in modern law enforcement technology – witness the use of the latest tools of modern police investigation known to man at the time – a slide projector. So this film is kind of like CSI: Old Blighty. Now, The Human Monster is very typical of a standard Edgar Wallace story. There’s a steadfast hero, a damsel in distress, a deformed killer, and an evil villain with a really pathetic motivation. 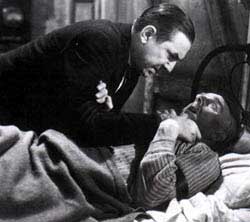 The more incisive of you may have gathered that Bela Lugosi’s scheme in this film compared to, say, White Zombie (1932), Scared To Death (1947) or even Plan Nine From Outer Space (1959), is a trifle tepid, to say the least. After all, the hideous murders perpetrated throughout the film are merely symptoms of a more heinous crime – insurance fraud. Oooh, scary! And what does he do with all this money he embezzles? Is it for the enormous electricity bill he faces every time he activates that machine to deafen blind people or, as we call them today, iPods? Or is it just to fund his morphine habit?

Well, there you have it. Just one of the many, many, many, many, many films made from an Edgar Wallace story. Join me next week for what is, in truth, a true classic of cinema, the 1919 masterpiece The Cabinet Of Doctor Caligari (1919). Till then, toodles!