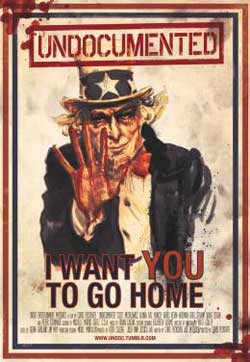 A documentary crew accompany a group of illegal immigrants crossing the Border, but their plans run afoul when they are captured by a gang of sadistic radicals in New Mexico.

So I’m going to jump in with a the plot of this film in a sentence: 20 something’s shooting a documentary on illegal immigration traveling with a bunch of coyotes (the people not the dogs) get abducted by a minute men style group and get kind of get a little bit tortured. I have yet to see “Red State” –I have very mixed feelings about what Kevin Smith has done but I have a feeling someone else is trying to cash in on an almost political formula that was just successful.

I love films that have a clearly stated opinion and have great big huge f*cking balls that they shove in your face while at the same time being subtle about it. “A Nightmare on Elm St” Death of the American Dream, “Dawn of the Dead” (NOT THE REMAKE) the failure of materialism to bring happiness or enlightenment, these are just a few examples. I seriously dislike Kevin Smith’s “Dogma” because I feel it’s so blatant in its message that it talks down to its audience by spelling everything out, as if to say “if I did this with symbolism you’d be too dumb to get it so I’m just going to preach everything to you.” “Undocumented” is like 65% to being so preachy that it’s almost talking to you like you’re almost an idiot. 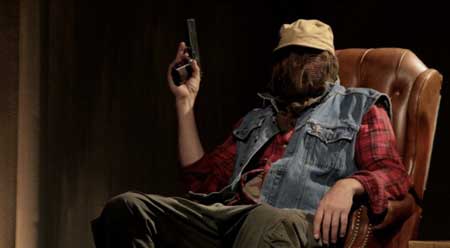 I wanted to root for this movie being something awesome and deep and it’s like it almost was. The other hitch of this film is that it is trying to be “hardcore” but doesn’t go the distance, just like the kid who wants to be a gutter punk and has the clothes but they smell like laundry detergent, not 3 month old body odor –if you think you’re a gutter punk and just took offence to that, then you are not a gutter punk. Anyway note the phrase “trying to be” we don’t live in the 1950’s, we don’t live during the time of the Hazy code, so why then during what could be a really f*cking awesome gore scene does the director/editor choose to show us nothing. Is it because that would be “exploitative” and that the drama of the film would be ruined, i.e. the same reason Werner Herzog didn’t play for us the audio tapes in the film “Grizzly Man…” I don’t think so, while this is an IFC production, I have feeling somewhere down the line someone wanted to be sure that this was going to be adorning the Walmart shelves, unlike “Human Centipede.” I’m sure you all know that “Human Centipede 2: Electric Boogaloo” will be coming out soon. Or maybe IFC executives or someone felt the subject matter of illegal immigration was so “controversial” that having a woman’s arm torn out of her body was something not to be shown.

If this film were for or against my personal views on illegal immigration it wouldn’t affect my opinion of the film and personally my feelings on the subject are: it’s a complicated matter that is not really cut and dry, I have no black or white answer on the issue. I’m not xenophobic and I’m apathetic to the needs/laws of government at the same time while I don’t feel threated in the work place by a person who can’t speak English, yet a lot of illegal immigrants do bring with them drugs and crime, something that “Undocumented” tries to ignore. That’s not xenophobia speaking, think about it you come to a country hoping to get work -doesn’t mean you get it, then you are up schiezer creek without any money and no way to leave. What OTHER choice do you have? All of the border towns on the Mexican side have extremely high crime rates because that is the staging point for drug smuggling into America. If you think I’m being “right wing” in saying this I invite you to Google “Santa Muerte” who is an unofficial saint that has been adopted in the border towns, what is she the saint of? She is the patron saint of criminals and death. Yes folks, this is the saint that the criminals prey to. And I would think Satan would be more effective you believed in that kind of thing. I’m also not left wing either, just a nice little heads up, filth are my polotics.

This is a film that keeps pointing out what douche bags the “Minute men” are, while simultaneously peppering us with a few facts about how, a very few immigrants do bring with them drugs and crime. And lightly peppering the blame of illegal immigrants on those who hire them -which really is the problem, granted the very low fines to businesses to exploiting illegal immigrants is why we have a problem. If you fine a business a million dollars per illegal immigrant they hired you think we would have an issue with people coming here for work?

But getting away from politics, and that the film doesn’t go hard core enough “Undocumented” has a stylistic continuity issue. And I mean stylistic continuity, I’m not talking about length of a cigarette during dialogue, that being said every other edit of the film is from the camera of documentary film crew, then jumping back to give us a third party point of view of the action. It keeps jumping around in a way that is very stream of consciousness which can be good but in this case it does nothing to augment or detract from the film it just kind of “is.” This could be looked at as a deep metaphor for the “reality and unreality” of the media’s portrayal of the immigration issue. On the flip side the film spells out everything for the audience like we are stupid, so I have to say that the usage of that kind of symbolism I feel to be highly unlikely.

Peter Stormare “Fargo”,” Armageddon” and leader of the nihilists in “The Big Lebowski” is the leader of the fake minute men group in “Undocumented.” Peter is a GREAT ACTOR I love him I’m a total fan of his work… But you remember his amazing work in “The Big Lebowski” as the leader of the Nihilist? When he had such great lines as “Wez gonna cut off your Johnson Lebowski,” “Jah we believe in nuhzing Lewbowski” well that is his REAL SWEDISH accent… Which is weird because in this film it’s like he sounds half red neck half Swedish, and his character is a LEGAL immigrant WHO HATES ILLEGAL immigrants but his motivation in never explained. I guess you could say that his character is symbolic of the fact that the white people that are so aggressively supporting the illegal immigration laws aren’t the “natives” of the land and they stole through one of the worst acts of genocide in history etc… but this is what I mean by preachy, cause if the film wasn’t trying to throw this in our face we’d then maybe get a character back story so this would be a TOUCH more subtle.

I like films that make you think, and some of the best films in the horror genre are films that make you think. What I don’t like about “Undocumented” is that it doesn’t allow you to think for yourself, the way say the original “Texas chainsaw massacre” forced you to. “Undocumented” spells everything out for you, almost condescending to the intelligence of its audience. Horror fans, I think are some of the most intelligent moviegoers out there do we really need everything spelled out for us? If you’re looking for a watered down kind of political version of a film that sorta feels like Wolfcreek this is it. Only this doesn’t have the light weight spook ability of being able to say “based on a trueish story.”

The characters are a notch above cookie cutter only a little extra thawing is given to them but it’s all slightly superficial, I don’t know if this was rushed or the idea wasn’t thawed or whatever but I can tell you this much director Chris Peckover has a bright future ahead of him. Not because he is a good director but because this film is distributed by IFC and they are a powerful group to have behind you. Honestly I just wish they’d select better projects to back like the next Uwe Boll film… “RAMPAGE” was good! At the end of the day I do have to at least be thankful that for all it’s failings, this film at least tries to say something (no matter how poorly) in a time when so many films do not.