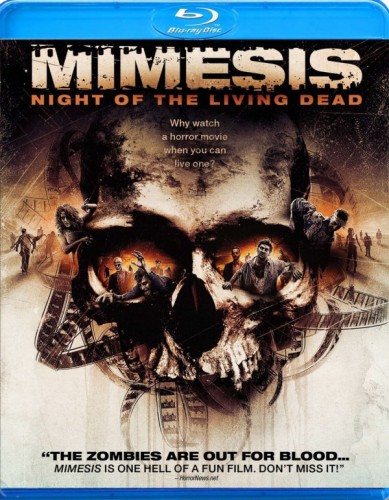 A group of horror fans find themselves unwilling participants in a nightmarish role playing game that pays homage to a classic horror film.

The idea of a red carpet premiere in the small town of Port Huron, Michigan is absolutely ridiculous to me. I grew up here and still reside here. Nothing of the sort has ever happened here before. All that has changed tonight with the Midwest premiere of the Michigan lensed horror film “Mimesis”. Several stars of the film, including Allen Maldonado, David G.B. Brown, and Sid Haig were in attendance with director and co-writer Douglas Schulze to present the film to the public. Now, was the film any good? Aside from a few minor complaints, I’m happy to say that yes, “Mimesis” is good. I went in with low expectations and by the halfway point, I was sold on the concept and enjoying myself with the rest of the audience. And the audience was eating it up.

For those of you who do not know, the term “mimesis” means “to imitate”. That sets the stage for the events that transpire during the film. Russell (Taylor Piedmonte) and Duane (Allen Maldonado) are enjoying a day at a local horror convention. Russell is excited to meet his favorite director (played by Sid Haig) while Duane is eyeing the ladies. They meet Judith (Lauren Mae Shafer) who invites them to an exclusive after party that only a select few know about. Once they arrive at the bizarre gathering, they mingle with some of the other attendees before…everyone passes out. The first to wake up is Russell and another party patron Karen (Jana Thompson). They are dressed in clothes out of the 60’s and once the zombie is seen in the background, it becomes apparent to the audience that they have found themselves smack dab in the middle of “Night of the Living Dead”. As more people show up, in the exact same way they show up in the film, they realize that someone is playing a sick game with their lives. The question is, will they be able to survive.

I’ll admit, it took me a moment to warm up to the flick. Not a long moment, it was rather short. I started to nitpick right away. My first complaint was when Russell and Duane show up at the party, it was broad daylight. Then as they are walking to where everyone is, it is pitch dark. Then a few moments later when Duane uses the bathroom, it’s pretty light again in the background. Then I thought to myself, things happen and it was forgivable. As the story began to progress, I found it to be predictable. The kicker though is that part of why the film is so fun was that the middle act is predictable. These people are living “NOTLD” and they are fans of the film. The zombies are out for blood, this isn’t your typical LARPing (Live Action Role Playing). I won’t go much further into the story but the concept is really unique and fun.

On a technical level, the film looked great. The lighting is spot on and the cinematography was top notch. The special effects were done practically and looked terrific. Not overly gory but enough to please the crowd. The score by Diego Navarro felt contemporary when it needed to be as well as classic at the right times. The locations were amazing, especially the old farmhouse that was used to replicate the original. I also spotted the Novi Sheraton in Novi, Michigan. I was actually there when some of those scenes were shot. I had no idea what they were being shot for at the time.

The acting from the cast was great. Sid Haig was reliable as usual with Allen Maldonado being a standout. I did however feel that Jana Thompson may have been WAY off on some of her delivery or maybe it was just her dialogue. Overall, a solid group of performers.

I really don’t want to get into specifics of the story, I knew nothing of the movie before watching it and if you have the chance to see it with an audience, don’t hesitate. It really plays great to a crowded theater. **** out of 5 stars. “Mimesis” is one hell of a fun film. Don’t miss it!!!

Mimesis is now available on Bluray!