Samantha Somer-Wilson, co-star to Brooke Palsson in the Canadian Short Screenplay Competition short film has won the Best Actress in a Short Film category at the 2011 Tulsa International Film Festival this week.

Tulsa, OK— The Canadian Short Screenplay Competition’s 2008 3rd place winning script ‘Rusted Pyre’ written by Daniel Audet and directed by Laurence Cohen, is only part way through it’s initial film festival circuit, and the accolades are starting to stack up.

The short film played to enthusiastic crowds during the opening night open air festivities as part of the Tulsa International Film Festival’s Opening Night Block Party and again when it screened in competition as an official selection. The screening marked the US premiere for the short film that began screenings at the Cannes Film Festival as part of Telefilm Canada’s ‘Not Short on Talent’ programme curated by The Short Film Corner’s Danny Lennon, before crossing the pond back home to Canada where it made it’s North American premiere as an official selection of the Canadian Film Centre’s Worldwide Short Film Festival.

Somer-Wilson was shocked to learn of her win. “What a way to start my New Year (Rosh Hashannah)”, says Somer-Wilson. She further acknowledges her co-star in the short film, Brooke Palson of HBO Canada’s ‘Less Than Kind’ and credits her as “(my) Partner in crime – I had the best time working with you. You brought out the best in me and I learned so much from you“.

‘Rusted Pyre’ Director, Laurence Cohen seconds Somer-Wilson’s sentiments, offering “One performance is not separate from the other in this two-hander and it really takes two to tango. This (win) is a testament to the incredible talent of both these young stars”.

‘Rusted Pyre’ will screen next at the Edmonton International Film Festival Saturday, Oct. 1, 2011 at 12:00 noon in EIFF’s ‘Our Own Backyard’ program. 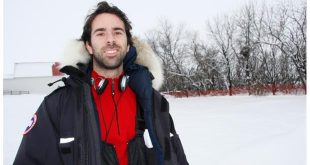