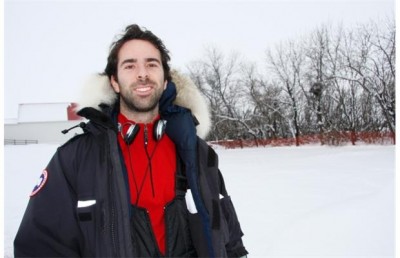 2 Girls head out to an old abandoned car during one winter day. As they sit and chat within the vehicle, it is revealed that the car was a past location for girl who had died. The 2 girls plan on staying in the vehicle until night time so that they can tell their story the next day. One of them, an older more somber teenager , tells of a rumored ghost story that happened long ago. The other, a more cheery participant, has come to save face with the cool crowd. In any case, they ride it out till night time until the storytelling begins.

The girl was about their age, stranded in a blizzard when her car wouldn’t start. When the boyfriend went out to get help, he was stricken with frost bite and got lost. The girl who waited froze to death.

Even with minimal to work with, this small tale manages to instill that classic ghost story ambience. It doesn’t take much in this case to keep you guessing as the short plays on. “Rusted Pyre” succeeds in building tension and delivering a firm direction for the audience to engage in. The younger girl pretty much calls it from the start…”wanna hear a ghost story”.

A cool piece directed by Laurence Cohen, that excels in classic storytelling frights. It stars Brooke Palsson and Samantha Somer Wilson. This is the kind of piece you’ll want to watch with the lights off. I’m sure the buildup will send chills and get under your skin.