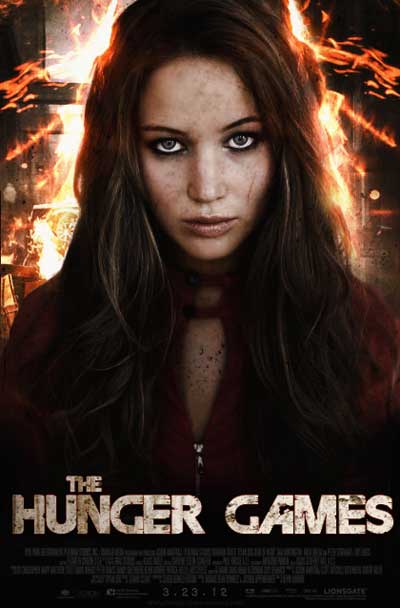 A young girl volunteers to take her sister’s place in a fight to the death in a dystopian future.

For a few years now, fans of Suzanne Collins’ The Hunger Games (the first book in the three book series, published in 2008), have eagerly anticipated the film adaptation. Well, the time has come and with Gary Ross’ direction, The Hunger Games is now thrust welcomingly upon the world.

In a futuristic world known as Panem, implied to be very similar to the United States, there had previously been an uprising against the government. This uprising was quashed and the country was broken into twelve heavily controlled districts. Each district is required to do their part to support the country, from agriculture to energy. Mining coal is District 12’s required forte, but hunger is constantly rampant and simply a stale loaf of bread is cause for rejoice.

With her long gone father having perished in a mine explosion causing her mother to become withdrawn, Katniss Everdeen (Jennifer Lawrence) must take on the role of family provider and caretaker of her little sister Primrose, a role she strongly and lovingly embraces.

Surrounded by an electric fence, out of necessity both Katniss, using her precise archery skills and Gale (Liam Hemsworth) are survivalists well adept at sneaking out of the district’s confines to hunt game. Typically, they meet up and together view the area as a sanctuary, at least until the government’s patrolling flying saucer-like contraption scares them off. 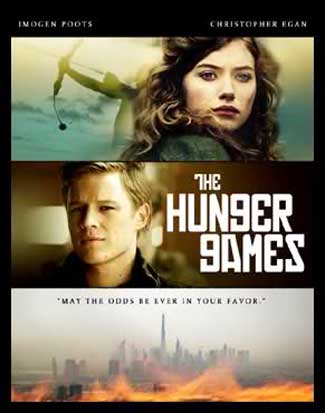 And, as if living in the district isn’t harsh enough, the time has come for the country’s annual must see televised event, an event dictated by the government as a way of showing sacrifice, control and discipline. It is time for The Hunger Games, a brutal fight to the death spectacle requiring each district to lottery select one boy and one girl to send to The Capitol as their representatives, or tributes as they’re referred to.

Primrose has little chance of being selected since this is both, her first year being included in the lottery and thus, her name is only entered once, unlike the other children who have seen their entries grow due to both age, as well as trading entries for meager, but extra, government supplied food. Regardless, she is selected. Katniss is heartbroken and can’t believe it, volunteering to take her place as tribute, a first-time for the district. 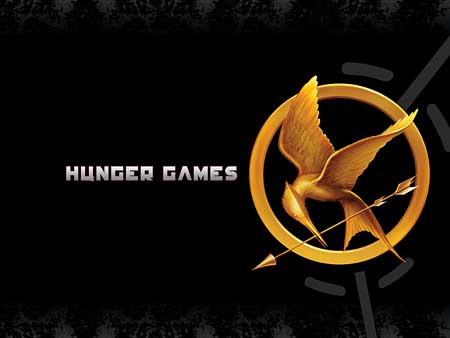 Accompanied by trainer Haymitch Abernathy (Woody Harrelson), District 12’s prior lone winner and Effie (Elizabeth Banks), an extremely excited public relations rep, both Katniss and boy selected Peeta Mellark (Josh Hutcherson) are taken into custody and whisked away toward an unfortunate journey to the over-privileged Capital where over-the-top pageantry style interviewing talk shows, as well as the games await.

Upon arrival at The Capital, each tribute is assigned an entourage of designers and make-up artists, in charge of presenting each tribute in their best light, hoping to impress and obtain sponsors (wealthy viewers who will send them useful or needed, but costly items throughout the gameplay). Cinna (Lenny Kravitz), a compassionate designer secretly harboring the same animosity toward The Capital as Katniss does, is assigned to her. Through a fantastic design utilizing fire flying off her skin tight, coal black outfit, she woos the crowd from their chariot driven introduction and becomes known as the girl on fire (more on that in Collins’ second book Catching Fire, and certain to be portrayed by Lion’s Gate’s second franchise installment due out November 2013). And, it is during his live interview that Peeta professes a deep love for Katniss, something she knew nothing about. Suddenly, the two are immediately promoted, to the joy of The Capital, as tragic lovebirds. 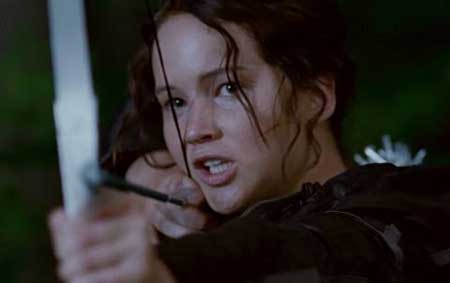 Besides the televised events leading up to the competition, each tribute has the opportunity to show a personal skill to the judges, to be ranked for betting purposes and to also aid in obtaining sponsors. Katniss, being from District 12, is near the end of the display line when her turn finally comes up. By this time, the judges have grown bored and are now much more interested in personally conversing than viewing a tribute’s skill. This angers Katniss and she fires a precision placed arrow between the unaware judges and into a roasted pig’s mouth stuffed apple on a table at the center of them. This obviously surprises and horrifies the judges. However, it has been for the best as she is given a very good ranking score of 11 and may very well attract sponsors with such.

The day of the games arrives and each tribute stands ready on a round platform before a cornucopia of weapons and such, awaiting the starting countdown. Katniss has been warned by Haymitch to avoid seeking the scattered various implements – that it is a deathtrap constructed by the gamemaker to start the games off with a bloodbath – and to simply seek shelter instead. Katniss takes his advice, managing to snatch a bag of items along the way, and heads to more familiar ground…the wooded area. Before long, she is far enough away to stop and explore what the bag holds. Besides an empty canteen, the bag contains a rope, which she uses to tie herself off on a high branch in a large tree. Before sleep invades, cannons are heard, each boom indicating a tributes death and she views the projection on the transparent dome showing the unfortunate ones. Peeta is not one of them. 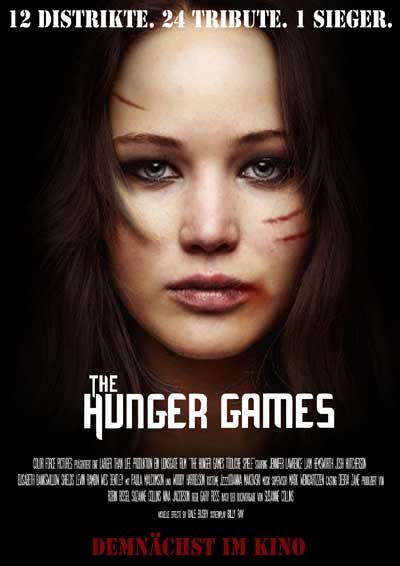 The next day she awakes, but is too close to the arena boundaries. The ever invisible gamemaker, constantly overseeing an electronic game board representation of the arena, decides to turn her back, creating a massive wildfire that, in her frantic escape, burns her leg.

She ascends another tree, but her rest is short lived as a group of rogue tributes, including Peeta, have banded together and now hunt down the others. They spot her in the tree. After several unsuccessful attempts at getting her (shooting arrows and an especially aggressive tribute falling while attempting to climb the tree), the group settles below to wait her out.

Near dawn, with the rogues still asleep, Katniss is contacted by Rue (Amandla Stenberg), a tiny lithe female tribute from District 11 who happens to have been hiding unseen in an adjacent tree. Rue points to something in the tree Katniss is in. It is a large nest of tracker jackers, genetically engineered and vicious hornet-like bees whose sting can cause everything from hallucinations to death. Katniss climbs up to the nest and, receiving stings herself, uses a knife from the bag to saw off the branch holding the nest. The nest crashes to the ground, breaking open and sending a swarm after the rogues, chasing them away and killing Glimmer (District 1) in the process. 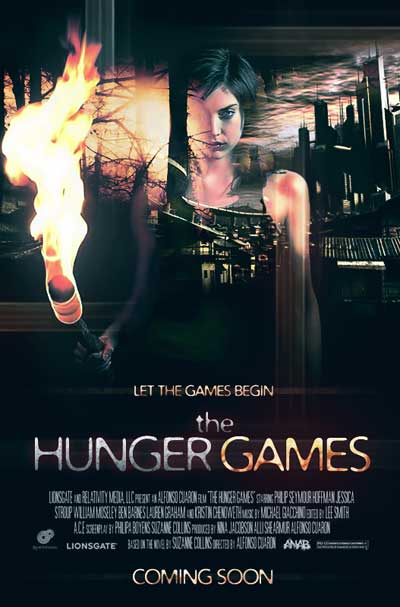 Katniss gets down and scurries away, taking a bow and arrows from alongside the stung to death Glimmer. But, having been stung a number of times herself, she is starting to feel the hallucinogenic effects and, deeply under its throes, is unsure of what she is seeing or has seen, which happens to be Peeta fighting other tributes and aiding her escape.

When she finally revives, two days later, she quickly notices the tracker jacker poison battling leaves placed on her hand stings. It soon becomes apparent that Rue has protected and watched over her, changing the leaves throughout the course and saving her life. The two bond and embark upon tricking the gang, using smoke to coax the rogue tributes to seek them instead of lingering at the remaining cornucopia supplies they had collected, stockpiled and protected with buried mines. Katniss, assuming this would occur, takes the opportunity to shoot arrows, cutting open an apple bag and letting the apples far onto and trigger the mines, destroying the supplies. Now everyone is more equal, at least those with survival skills, two of which obviously happen to be Rue and Katniss.

So, gathering the do until Rue becomes entangled in a net (a trap set by Marvel (Jack Quaid) from District 1 and cries out for Katniss’ aid. Katniss finds and releases her, only to see her speared by nearby Marvel. Katniss quickly takes aim and pierces Marvel’s heart, killing him before taking dying Rue into her arms. In a rare showing of emotion, Katniss breaks down and covers Rue’s body with beautiful flowers. Respectfully, she stands and flashes a three finger sign to the unseen but constantly following television cameras in an act of defiance. Thus, the uprising begins again. (Much more on this in installments two and three).

She then begins a quest to find Peeta and does. However, he has been injured and now sports a potentially life threatening sword wound to his leg. Together the two take refuge in a cave, where they are relished, after a quick kiss, with a sponsor’s soup offering. The gamemaker announces that at the cornucopia there is an item that each tribute desperately needs. Katniss knows it is medicine for Peeta’s wound and readies to go get it. But, Peeta sways her into staying and she does, for the night. The following dawn, with Peeta still asleep, she slips away with intent.

At the cornucopia, she watches closely as Foxface, (Jacqueline Emerson) a tribute from District 5 snatches her item before making her attempt. Katniss makes it to the number 12 bag, grabs it and hurriedly turns back towards the woods. But, her route is blocked by a knife throwing Clove (Isabelle Fuhrman), a ruthless female tribute from the arrogant District 2 (known for specifically training tributes and having the most winners). Katniss ducks and avoids a direct hit, but obtains a large slice on her forehead. Clove attacks and wrestles Katniss to the ground, holding a knife to her throat and declaring, out of spite, that it was her partner who killed Rue. Thresh (Dayo Okeniyi – Rue’s District 11 partner) overhears and pushes Clove off Katniss. Clove, now fearful for her life, pleads that it wasn’t true, but Thresh doesn’t believe her and smashes a rock into her head killing her. Looking at Katniss, he gives Katniss one chance to escape, “for Rue.”

Back at the cave, Katniss applies medicine to Peeta’s wounds, and he to hers, before collapsing in each other’s arms. The following morning their wounds are amazingly healed and they are now capable of maneuvering. While out gathering, Katniss finds Foxface dead from eating poisonous berries and after seeing a pile of the same on Peeta’s jacket, franticly searches for him. She finds him, hand stained but safe, not having eaten any, and is tremendously relieved.

Another boom goes off and then there were only three. Along with the boom is an announcement stating that for the very first time ever, if the two surviving tributes are from the same district, they will be declared co-winners. This gives Katniss and Peeta hope.

“The Hunger Games” continues in this fashion keeping the suspense and action constantly rolling with the assumption that their will be more deaths and a few surprises by the sponsors and organizers of the game in play.  Actress Elizabeth Banks demonstrates her emotional range which quickly turns from confident to heartfelt into just a simple girl trying to survive.

Fast paced and intriguing from scene one, The Hunger Games never loses momentum. It is a film that will appeal to both readers and nonreaders of the wildly popular novel series, which coincidently sticks closely to its roots. It is a film worthy of viewing more than once and certainly seems destined, at least according to opening weekend indications, to become one of the year’s best. Therefore, watch out Bella, there is a new heroine in town. Her name is Katniss and her tale is far from over.