Where did the concept of Roxsy Tyler’s Carnival of Horrors come from?

When I was a little girl I decided I wanted to be a writer when I grew up and that was originally what I always intended to do with my life. I wrote an anthology of short stories and poetry called “Big Boots and Black Hair Dye” and there was a three part short story series in it called Roxsy Tyler. I published it when I was 19 years old and my readers really seemed to dig those stories. They were horror-themed action adventures. The stories are nothing like my show in the sense that Roxsy Tyler is a very brooding and conflicted anti-hero whereas on my show she’s more bubbly and funny. The carnival scene originated from those stories because I’m a huge fan of carnivals. When it came time to do our show we decided to stick with that carnival theme because it’s such a wonderful combination of fun and fear.

What kind of content can we see on your Carnival of Horrors?

You can see old, classic, black and white horror films ranging from the 1920s to the 1960s. Every ten minutes we break into a segment where I’m slapping and bossing around my carnies (Johnnie 13, Dr. Villhelm, and Mr. Potent). We usually have our own story going on at the Carnival of Horrors. When we hosted Attack of the Giant Leeches we held a “blood drive” for starving vampires but some meddling health inspector caught on that I was feeding people to my new pet giant leech and the inspector had to be disposed of. We do fun things like that on the show.  We’ve also hosted behind the scenes episodes for full-feature independent horror films in our area. We plan on doing that more often because there’s a very happening scene here in Philly for low-budget horror films.

How is the horror scene in Philadelphia?

It’s wonderful! We have a lot of independent film makers making horror films here. The production company (Potent Media) that co-produces me show is shooting Deer Crossing here with Doug Bradley and Ernie Hudson. In fact, I had scenes in it with Ernie Hudson and it was a phenomenal experience. When I’m not doing my show I’m working on my acting career and usually when I’m looking up casting calls I see a lot of horror films being produced. We also have a zombie prom here, lots of great haunted attractions in the fall, and a lot of hot spots for ghost hunting like Eastern State Penitentiary and Fort Mifflin. We have Edgar Allan Poe’s house here which I’ve visited many many times. We’re rich in horror hosting history as well. I didn’t even know too much about that until I started doing it because I was so young at the time. We’re really big on horror here in Philadelphia.

It getting near to my favorite time of year,  Fall and Halloween.    Do you have anything planned for this Halloween?

Every year since I was ten years old I’ve went to a place called The Valley of Fear. It’s my favorite Halloween attraction in Pennsylvania and 90 percent of my cast members work there in October. We did our Halloween special on location there last year. I’m hoping to visit there again this year. Other than that I don’t have anything planned. I just float to where ever the fun is all Fall long.

I really can not narrow it down. I can tell you what wasn’t my favorite movie (though it is a favorite now) Child’s Play. Chucky scared the holy hell out of me. To me, there was nothing scarier than the concept of one of your toys coming to life and trying to kill you. Any time a Child’s Play commercial came on TV I would run out of the room crying my eyes out and hide under the dining room table. I was petrified of dolls. I slept with the light on in my bedroom every night until I was 12 years old because of Chucky. Now I love the Child’s Play movies. I got older, I watched them, survived them, and now I love Chucky just because I respect that fact that Chucky scared me that much.

You were recently at MonsterMania in Cherry Hill, NJ – How was that experience?

MonsterMania in Cherry Hill is local to me so I go twice a year every year and I always have a really good time. I’ve come to know a lot of the people who go every year and I really enjoy meeting people who have seen my show. The first time I went nobody knew who I was and every time I go now I keep meeting more and more people who like my show. I enjoy conventions, I really do. In August I finally made the guest list on the MonsterMania website and it was just awesome. I felt fulfilled to be on the guest list for a convention that’s local to me and to get such a great acceptance from everyone there. MonsterMania is always fun. If you’re looking for a good horror convention or have never been to a convention I would highly recommend it. It was my first horror convention!

Who is your favorite horror host from the past?

My generation was brought up on Elvira and Joe Bob Briggs. I grew up watching them and had no idea there were so many others out there. Now I obviously know there’s hundreds out there and that’s really cool. Horror hosts are turning into a sub-culture in a way and it’s really neat to see all the different personalities out there just doing their thing.

If you made a horror themed Philly Cheesesteak, what would you put on it?

Wasabi. If I had it my way Wasabi would be on everything. It has the ability to make you cry, make you scream, and maybe even make you bleed so Wasabi should be on a horror themed Philly Cheesesteak. I went to a film festival and found this neat chinese restaraunt to have dinner at. I’m a glutton for pain. I dipped the Wasabi in some spicy mustard and the result of that was a beet red face and a nose bleed. Oh yeah, it was that good.

Do you believe in ghosts and the paranormal?

That’s a really good question. I believe in the possibility. I’m the type of person who will always try to find a logical reason for a strange occurrence. That can make it fun though because if you’re a skeptic and there really is something out there it’s like playing a cat and mouse game with the unknown. I’m completely open to the possibility I just don’t think I can believe it until I have a paranormal experience for myself.

Where can fans watch Roxsy Tyler’s Carnival of Horrors?

If anyone is interested in my show there’s plenty of places to see it. All of our full episodes are on Vimeo at vimeo.com/carnivalofhorror  you can watch clips of our show on youtube at youtube.com/rtcarnivalofhorrors. We stream past episodes at livestream.com/carnivalofhorrors  where you can also chat while watching the show. We also just came out with our first DVD for our Attack of the Giant Leeches episode available for only six bucks at the online store on www.mrpotent.com 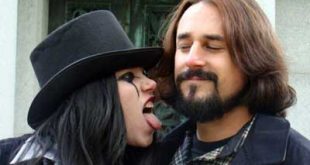