Many of us in the Horror world know her as the vibrant and talented Carmela “Roxsy Tyler” Hayslett who stars and hosts “Carnival of Horrors,” now there is a big buzz surrounding a new independent horror film called “Deer Crossing” in which Carmela “Roxsy Tyler” Haylett stars in. The film is directed by writer and director Christian Jude Grillo and it stars Christopher Mann, Laura Lynn Cottrel and beloved horror legend Doug Bradley who is known as Pinhead from the “Hellraiser” series. Also joining the cast after replacing Michael Madsen, the great Ernie Hudson took on the role as the police captain. Tyler is a placement at many of the horror conventions and fans love her. Tyler hails from Philadelphia, Pennsylvania and hosts “Carnival of Horrors” along with the infamous Mr. Potent. In “Deer Crossing,” Tyler plays Olivia Brice, a special interrogator who may look too young to work for the police but she does and does a good job working with the extraordinary cast. “Deer Crossing” has been getting a lot of great reviews and critical acclaim from fans so this looks like just the beginning for Carmela “Roxsy Tyler” Hayslett who has a long, fearless career ahead of her and make sure you go and see “Deer Crossing” when it comes to your town. You can also check Roxsy out on Facebook and vimeo.com/carnivalofhorror

I had the opportunity to interview Roxsy and Mr. Potent, here is what they had to say.

Janel: First off, tell us a little about yourselves? How did the two of you get started?

Mr. Potent: I started off as a sound engineer with my own professional recording studio recording local bands in the Philly area. I always had a dream of doing music for film. I just didn’t know how to make that leap into film composition. Speaking to Tom Savini I asked a question, “What is the secret to breaking into the film industry?” He gave me a genuine answer: “There isn’t one. You have to go do it yourself. Go make your own movie. Now stop blocking my table.” So, I did. In 2006, I wrote and produced my first feature film “Belial”. It was what it was. A first feature film. But what I did find out was that I was addicted to film making. I wanted to direct my first short film after that. In 2007, I wrote, direct, and produced “The Wish” a half hour short film modeled after a twilight zone episode. It won two awards. Since then, I have gone on to write, direct, and produce two feature films under the now Potent Media name: Booley and Deer Crossing both are receiving distribution.

Roxsy: I started off in Potent Media back when it was Potent Pictures as a “Potent Girl”. The Potent Girls were a street team of models who promoted Potent’s movies. Mr. Potent and I met through a mutual acquaintance who was also a Potent Girl and brought me into the fold. I do not like modeling. I love getting my picture taken but when you call it “modeling” I tend to like it a lot less. No disrespect to models at all. It’s great if it’s your thing. It just wasn’t mine. I like to contribute in more ways than just my face or my body. I like to be hands on. I graduated from being a model to being a still photographer. A still photographer to video editor, actress, and eventually it all lead to my becoming a horror hostess. Mr. Potent co-produces Carnival of Horrors, runs the cameras, and does all the music for each episode. I star in, write, produce, and direct the show.

Janel: Tell us about the new project DEER CROSSING starring Doug Bradley and Ernie Hudson and what was it like working with them? How did the idea come to fruition for the film?

Mr. Potent: When I wrote Deer Crossing I wanted a no-holds-barred type of story, not for shock value but because I like dark stories. I believe the scariest thing on the planet is the human monster. That’s what Deer Crossing is about. Doug and Ernie are both veterans in their craft. I feel that they both tolerated me. When I do things I like to do them my way. Sometimes I’m a bit non-conventional but for me it works. Doug laughed at me when he saw four or five cameras pointing at him at the same time. He told me on a professional film set only one camera normally shoots at a time. I still can’t fathom that to this day. I like the idea of having all of my shots in the same take. Ernie was really cool. He was fun to hang with and he’s a real gentleman to work with. I hope to work with both of them again soon.

Roxsy: Doug Bradley spit-balled me at dinner the one night. It looked like it might have been accident until he started laughing. It wasn’t a real spit ball though. He had the straw wrapper opened and he blew into the straw so no I didn’t get Doug Bradley drool on me and no I can’t make clones out of his DNA. He was smart about it. He’s quite a prankster on set. Loves to have fun, hang out, and talk about movies. I found out he enjoyed Batman: The Animated Series and he and I talked about Bug Spray. He even let me show him the Carnival of Horrors set. Ernie I was a little star struck with because I had been watching him since I was a little girl. I quickly got over it though because he’s very comfortable to be around and work with. If I do nothing else with my life I can still say I was in a film with a Ghost Buster. 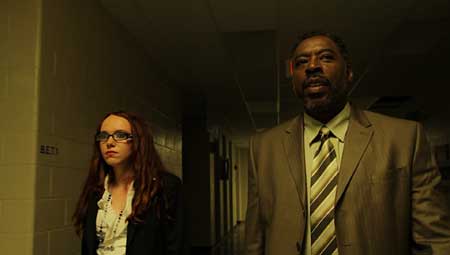 Janel: Who inspire you both and what motivates both of you?

Mr. Potent: In all honesty, if we’re talking directing career I would most like to be like Robert Rodriguez. He does what he wants how he wants and I love that about him. But I’m inspired most by people who come up with something new. I wouldn’t mind being the guy who invented facebook either.

Roxsy: I think we inspire each other on the most part. The people who watch our web show, our movies, our videos, our music videos, are the people who inspire me. I like to entertain but entertaining would be pointless without people who watch us. Also, as weird as it may sound, I’m heavily influenced by The Marx Brothers. I know it might be funny to hear that a horror hostess derives inspiration from a comedy troupe but that’s the truth. Watching Marx Brothers films entertains me and influences how I would like to entertain others.

Roxsy: My favorite part of horror conventions is the atmosphere. Horror is an exciting genre that has a lifelong, die-hard fan base. It’s nice to be somewhere where you have a mutual interest with everyone. Plus, you can walk around, soak it all in, get on the elevator to go up to your hotel room and suddenly your riding that elevator with someone you saw in a movie. It’s exciting. It’s a personable and intimate setting for any horror fan. So, I would say the atmosphere and the chance to meet people are my favorite things about going to a convention. It’s always nice to meet people who have either seen Mr. Potent’s movies or Carnival of Horrors. It’s a good feeling. I like getting out there and getting to know my fans. I try keeping in touch with people I meet at these conventions. Especially if they have watched our stuff. They deserve to be treated like gold because that’s how I feel when they come to these conventions to meet me. I feel like gold.

Mr. Potent: The neat thing about Roxsy at the conventions is like playing Where’s Waldo? She’s always talking to somebody or meeting a new fan. It makes it very real when I go to a convention and a little girl knows who my girlfriend is.

Janel: How you continue to keep “Carnival of Horrors” new and fresh? Do you have a dream guest?

Roxsy: My dream guest would be Albert Wesker but he’s not real. Or so I’m told. We try to keep Carnival of Horrors fresh by trying to include horror-based comedy to our show and by constantly beating the crap out of each other. When the cameras are off we’re all nice but when the cameras are on in come all the abuse.

Janel: DEER CROSSING was set in and around Philadelphia, do you plan to do the same with future films?

Mr. Potent: Yes and no. When my friend, Actress Tina-Desiree Berg came out from California to be in Deer Crossing she was amazed at how much was at our disposal in the Philadelphia area. If I need a modern city scene it’s twenty minutes away. If I need a backwoods country scene it’s twenty minutes away. I have a lot of variety to shoot here in places and people but I would like to explore other countries one day.

Janel: What made you choose Christian Jude Grillo to direct the film?

Mr. Potent: One morning I woke up, I looked in the mirror and decided I was the right person for the job. (Mr. Potent is Christian Jude Grillo)

Janel: If you had could invite three deceased Horror legends to “Carnival of Horrors,” who would choose and why?

Roxsy: Vincent Price is a definite. Peter Cushing and Bela Lugosi but I think if we could have had Vincent Price we would not let him leave. They’re my favorites.

Janel: What is something that your fans would be surprised to know about you and Mr. Potent?

Janel: “Big Boots and Black Hair Dye” is one of my favorite books you released; will you ever write another book?

Roxsy: Thank you! Yes, I would like to. I haven’t had much time to write in the recently past years but I have tons of stories and poetry I have yet to release, maybe someday. I was so young when I put out “Big Boots and Black Hair Dye”. I feel I’ve outgrown it but I’m still happy that people enjoy it. I’d like to either publish another anthology of short stories and poetry or write a diary-style autobiography.

Janel: If they make a movie about your life? Who should play you?

Roxsy: I should do it. Totally.

Janel: What is next after DEER CROSSING and who is your dream star to film with?

Mr. Potent: Currently, my agent in L.A. is securing money for Deer Crossing two and three. I also want to do a children’s film. One person I would love to employ would be John Goodman but if we’re talking favorite actor: Gary Oldman but I would trade them both in to give Dakota Fanning a role.

Roxsy: I agree on John Goodman and Gary Oldman. Every time Potent does a film I suggest John Goodman. I would like to have a love scene with Cillian Murphy. That would be good. Hey, if he gets Dakota Fanning he better have Cillian Murphy on set too. That’s all I’m saying. 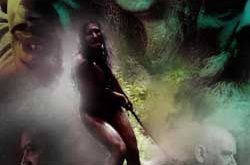 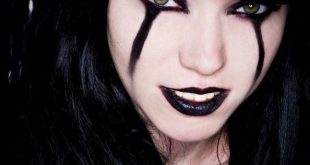