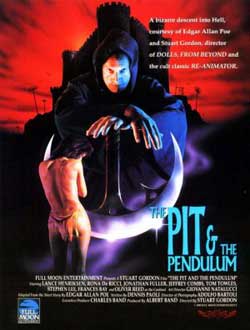 It is the time of the Spanish Inquisition. Maria does not like what is going on during the “Auto De Fe”. When she speaks out, she is arrested and accused of being a witch. Torquemada has plans for her! He orders her tortured, and her tongue to be cut out. Her husband attempts to free her…

How many Edgar Allen Poe stories does it take to make a horror movie? No, that’s not the first line of a joke but rather a question that this movie attempts to answer. Believe me, if you read up on your Poe before seeing this one you’re going to enjoy it that much more. The Pit And The Pendulum, also known as “The Inquisitor,” is over the top in a lot of ways, but that’s its charm.

Stuart Gordon (Re-Animator, need I say more) directed this nineties classic and I have to say it holds up pretty well for being twenty years old. Set against the backdrop of the Inquisition, the movie tells of lust, torture and murder. All the ingredients you expect from a good horror movie. It even has a choir singing in Latin over the opening credits which, for me, is one of my favorite conventions of the genre. Not much else can set a more creepier and sinister tone. 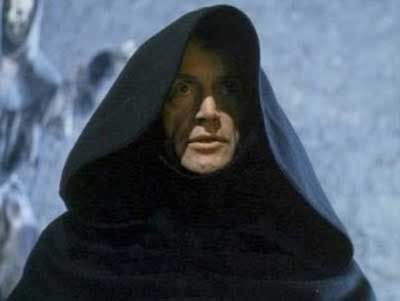 It is 1492 in Spain and the Inqusition is well under way. So much so that the opening scene has the Inqusitor Torquemada (played by the always strong Lance Henriksen) going after a dead guy. Yes, you read that right. A group goes down, takes the poor man out of his tomb even though now he is just a skeleton and proceeds to put him on trial for heresy. Needless to say they find him guilty and promptly give him twenty lashes. Seriously, I thought that this might be aiming to be more of a horror comedy because the tone of that scene does not fit with the overall movie. I have to say it’s brilliant though.

From here we follow the lives of a baker and his wife. Antonio and Maria (played by the gorgeous Rona De Ricci) lead simple lives until they try and sell some bread at a public gathering. They get swept up into the crowd and pushed into a courtyard where a lady is about to be publicly executed. Maria wants nothing to do with it and tries her best to look away. But when they bring out the lady’s son and make him watch as his mother is strangled, and then proceed to whip the boy on top of that, it’s too much. Maria dashes out to save the boy. Big mistake.

She is promptly arrested for witchcraft and brought before Torquemada. From here the movie falls into slightly more normal horror fare as she is tortured to confess her sins. Can Antonio save his love from this horrible fate? Can Torquemada control his lust and keep his hands off Maria? Will anyone survive the razor sharp pendulum? 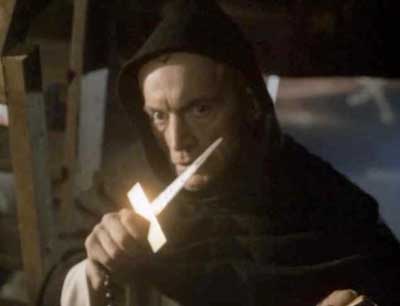 I would have to recommend The Pit And The Pendulum, especially if you are a fan of Stuart Gordon. Heck, even if you like Poe I would say give this one a go as you’ll love the multiple references. This movie has everything and it’s great. Gratuitous nudity, funny dialogue, outrageous set pieces and ample blood (though this is one area where it is a little restrained).

Lance Henriksen stands out as the tortured and torturous Inquisitor who wants nothing more than to inspect Maria from head to toe in the privacy of his chambers. Rona De Ricci is wonderful as Maria, the woman wrongly accused of witchcraft. In fact it is these two performances that really make this movie stand out from your typical horror movie. Stuart Gordon does well directing and does a good job balancing the horror and humor. 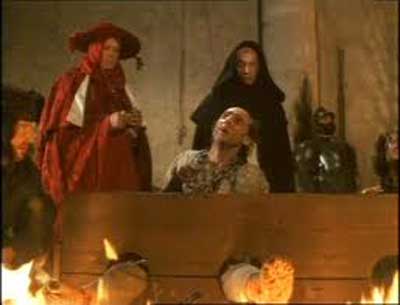 I would have to say catch this one if you can. Some will even want to purchase but I would caution to watch it first because this probably isn’t everyone’s cup of tea. If nothing else it will make you want to pick up a collection of Edgar Allen Poe stories and read them again. A horror movie that inspires you to read classic literature? Not too many can make that claim.

The Pit and the Pendulum is now available from Echo Bridge