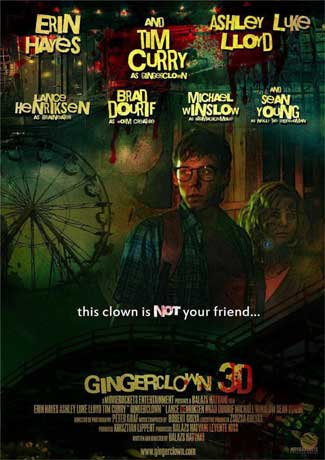 Just got the latest on a new production oddly called Gingerclown 3D. It’s funny that so many productions nowadays have the 3D tagged on. I still keep it 2D myself, as often as I can.

Gingerclown 3D is a Glam horror-comedy movie that had been produced in Hungary, by an independent production company, Movierockets Entertainment Ltd. It‟s the very first Hungarian horror comedy, in fact the first Hungarian 3D movie, with such fantastic actors participation like:

Erin Hayes and Asley Luke Lloyd are in the main roles, playing Jenny and Sam Tully. They are two bright British talent who had been selected for the roles through a long casting process out of few hundred applicants.

Gingerclown 3D brings back some of the 80‟s”glam horror” ambient, thanks for the specifications of the script, the old fashioned dialogue technics and the classic aminatronic monsters, the movie is mixing the old-school film effects with the most modern stereoscopic 3D technology.

This movie is completily suited to the today‟s audience‟s expectations and besides, it brings back some of the most remarkable horror icons on screen, to evoke the feeling of classic creature movies like „Tales from the Crypt‟, the „IT‟, the „Ghost Busters‟, or the „The Evil Dead’, directed by Sam Raimi.

Based on Balazs Hatvani‟s screenplay (Thelomeris – The city of Time) the shooting begin in the 8th of August in the Budapest Funfair. It’s set in 1983, Los Angeles and practically plays in the old amusement park (www.vidampark.hu/2009/eng/).
The movie‟s planned release through international distributors is the 31st of October, 2011.
Gingerclown 3D is a very multi-faceted, highly entertaining movie with colourful characters and „Hitchhikers guide to the galaxy‟ like dialogues, which is worth screening for a worldwide audience.

Our world famous actors are landing their voice to terrific animatronics creatures and the idea, to add their personalities and humour to the characters holds very high importance to us. We hope to bring back some of the greatest actors in roles that the audience would really enjoy seeing them in, and which roles have specifically been written for them out of respect and complete acknowledgement of their previous works in fantastic, iconic movies.