Home | Filming The Undead – How to Make your own Zombie Movie – News!

Filming The Undead – How to Make your own Zombie Movie – News! 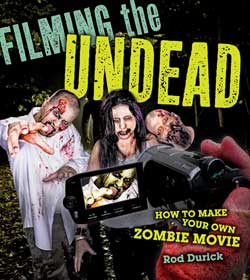 Special make-up effects artist Rod Durick of Zombified Studios in Buffalo, New York schools aspiring filmmakers in the ways to develop, create, and produce their own walking dead films in the instructional filmmaking book Filming the Undead: How to Make Your Own Zombie Movie. The affordable trade paperback will be published by Barron’s Educational Series on September 1st, and is available for pre-order now from such online retailers as Amazon and Barnes & Noble.com.

Durick has carved out a career for himself as one of the leading special make-up effects artists in Buffalo, which has an active independent horror film production scene. He served as the special make-up effects supervisor on Greg Lamberson’s Slime City Massacre and DefTone Pictures Studios’ recent indie zombie film The Final Night and Day. He also produced Jay Mager’s The Pigman and Born to Die, and recently directed his first short, A Change of Plans, as part of the 48 Hour Film Festival.

“When Barron’s contacted me about writing the book, a few thoughts raced through my mind,” says Durick. “First, ‘Jesus, 40,000 words is a lot.’ Second, ‘This might be a good thing for all of us locally, Filming The Undead – How to Make your own Zombie Movie – News!as well as a useful tool for those looking to get in to the fast paced world of no budget zombie film making.’ I contacted many of the players in the local film community and grilled them on ‘how they do it,’ I got pictures from other effects artists, and I got overwhelming support from everyone while I was writing the book.”

In the book, Durick covers all facets of film production, from concept and development through production, post production, and marketing. “I’ve been involved in a lot of independent movies with small or non-existent budgets. I’ve seen firsthand the mistakes that were made, and have been guilty of many of them myself. I’ve seen what works and what doesn’t work, I’ve picked up tips and techniques that seem like common sense after the fact. I put all of that in to this book.”

Filming the Undead: How to Make Your Own Zombie Movie is heavily illustrated and features sample storyboards, screenplay pages, and make-up tutorials. Durick will be a guest at the Horror Realm horror convention in Pittsburgh September 16th – 18th, where the book will have its official launch.

Filming The Undead – How to Make your own Zombie Movie – News!