Set in the Channel Islands on the eve of D Day,two Kiwi commandos, sent to destroy German gun emplacements to distract Hitler’s forces away from Normandy, discover a Nazi occult plot to unleash demonic forces to win the war.

Over the years there have been many horror films set in World War II. It really makes sense since it has long been discussed that Hitler may have been involved with occultism. “The Devil’s Rock” is the directorial debut of special effects artist Paul Campion. It deals with just that, an officer in the German army experimenting with the occult. He succeeds in making a seriously effective film that holds your attention from start to finish. Much of the praise must also go to the films’ two incredible lead actors, Craig Hall (“King Kong”) and Matthew Sunderland (“Out of the Blue”). When a film focuses on character and the horror elements just kind of work their way in, for me makes it a more successful film. That is why “The Devil’s Rock” is such a standout. Also, for the gorehounds, there is plenty to enjoy as well as a really great looking demon.

On the eve of D Day, Captain Grogan (Craig Hall) and Sergeant Tane (Karlos Drinkwater) are sent on a mission to destroy German gun placements on an island that could distract Hitler away from Normandy. What they weren’t expecting to find was that the compound on the island is full of dead bodies and screams are heard throughout. After the bombs are placed and the mission complete, Grogan can’t let the screams go and wants to help. Tane is just ready to get the hell out but reluctantly gives Grogan five minutes to see what’s happening. That is the biggest mistake they could have made. Grogan finds himself captured by Col. Klaus Meyer (Matthew Sunderland) who he later learns is responsible for finding a book. A book that has the power to unleash demons that can be used as weapons to do all of their dirty work for them. The demon in question is at the bottom of the totem pole, but their powers are still terrifying. Through exposition and conversations, we learn the true reason behind the screams in the stronghold. And where the evening takes them is a place that neither of them could have predicted. 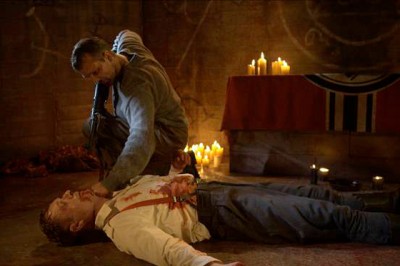 This isn’t a horror film in the traditional sense. It isn’t about a group of people in an old cabin in the woods being taken out by some evil force. The German stronghold substitutes for the cabin and it appears that the group of people (German soldiers in this case) have already been taken out. Here we have a tale of two men on opposite sides sparring off with one another when something really dark is locked up in a cell above them. The verbal banter between the two men is what carries the film and makes it unique. And everyone knows by now that Hitler’s connection to the occult was very real. By setting the film in a very real time and place in history helps to make this something worth seeing. The film opens with Grogan and Tane landing on the island and from that moment I was hooked. The suspense is built over time, rather slowly and masterfully. Though the film was done on a small budget, you couldn’t tell, the film looks and sounds terrific. New Zealand is home to many talented filmmakers and I think now we can add Mr. Campion to that list.

“The Devil’s Rock” is everything that I love about an effective horror film. Some of the best horror films have been slow burns. They build the tension and suspense through character. When the reveal does make an appearance (though apparent) it still manages to give you a jolt. Hall and Sunderland are pretty exciting to watch together. I also don’t want to forget to mention Gina Varela who is Grogan’s deceased wife as well as an incarnation of the demon. She pulls off the menacing and the sexy with ease. This is a film that might fly under the radar but worth your time to seek out. 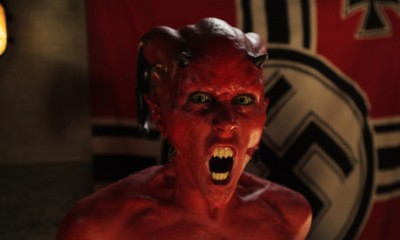 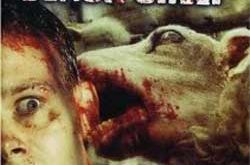 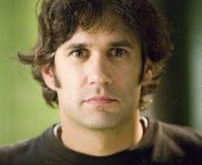