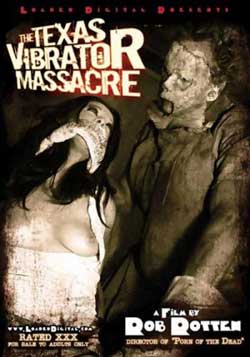 A group of friends lost in the back roads of Texas become separated after picking up a deranged hitchhiker, and find themselves at the mercy of the murderous Leatherface and his family of perverted cannibals.

The Texas Chainsaw Massacre is unquestionably one of the classic films from the horror genre. What could be better than an inbred boondocks retard running around with a chainsaw making chili? What can be said of The Texas Chainsaw Massacre and its character of Leatherface that has not already been captured in the words and emotions of every horror fanatic globally? Nothing, it’s all been said to death so let’s move on.

As much as I like the thought of chainsaws shredding through the flesh of vacuous sexually active teenagers, it still leaves me wondering if there were just a better way to eviscerate their internal organs into an adolescent antipasto. Sure, you can make some really good teen stew with their vigorous young meat and hormonal imbalance, but that recipe gets old fast. It’s not very sexy either, if you discount the erotica in their arterial splatter and painful cacophony, which I should add, is still kind of sexy.

The murderous arsenal of the horror genre is full of the same old rusted blades, chainsaws, and pointy weapons and although keeping an archetypal element to the essence of horror, can become boring. It’s about as boring as watching another dysfunctional relationship between a repressive teen and Oedipal emotionally incestuous vampire but I digress. The horror genre needs new and innovative methods of slaughter. 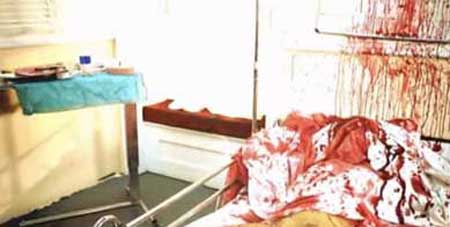 And the pattern of sequels, remakes, retellings, etc are equally as unoriginal and boring as that same concept of chick and vamp. This is where the adult industry sticks its giant d*ck into the dry cavities of horror. The p*rn remake or more commonly entitled “spoof” of classic and popular horror film adds fresh meat into the mouth of horror that is exponentially gagging upon its quality. This is where I make my point by the way. I am talking about substituting that chainsaw blade for a nice spinning vibrator and transform that blood splatter on the white walls of innocence into a money shot onto some naked chick flesh, who is probably white but not so innocent.

We begin our foray into the film with our group getting lost while driving in their “old white van” in the back roads of Texas (California in reality). The character of Vanessa, played by Roxy Deville who played Lily in This Ain’t The Munsters XXX by the way, is arguing about being lost with her boyfriend played by Seth Dickens. One thing leads to another, our couple in the back has sex as Ruby Knox leaves the van to go to take a piss. The first sex scene of the film captures a nice dirty element that vintage horror and p*rn should have. I do not necessarily mean that as a raw hardcore sexuality between Bella Lynn and jack Vegas, but the fact that a fly keeps landing on their humping bodies. Apparently it was a fly desiring to be on the wall of Bella’s ass. 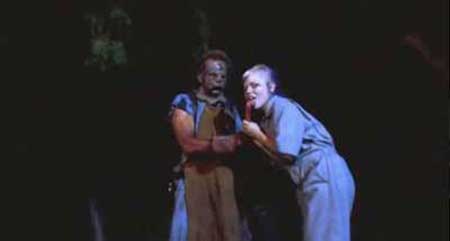 With sex done and Ruby returned from her elongated urination the group takes off. This is where they pick up the hitchhiker in hopes of getting directions. Our hitchhiker, who looks like the bastard child of Sammy Hagar and a random Goth chick, proceeds to slaughter Bella and Jack in the back of the van. We get some nice cinematography of the bloody dead bodies, complete with that fly again.

During the killing, instead of defending their friends everyone else runs away and gets separated. Vanessa stumbles upon the farmhouse, which is not really a farmhouse and as her curiosity gets the best of her, Leatherface played by Eric Swiss, grabs her and pulls her into the shed.

Meanwhile our other two friends find the house and are greeted by a hot pigtailed chick with a giant lollipop played by Jaime Elle. In a scene reminiscent of not Rob Rotten but Rob Zombie and House of 1000 corpses, our couple is sitting around the living room with two of Leatherfaces sisters waiting for the next scene to unravel. Elle’s character bewitches Vanessa’s boyfriend into the next room for some erotic shenanigans leaving Ruby Knox alone with the other punk rock sister playing with decapitated dolls. Rob Rotten shows up as the strangely mute character of Robbie” and begins taunting Knox by licking her here and there and batting his eyes psychotically. 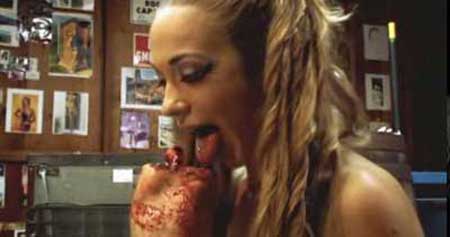 Within a logical world such flirtatious behavior would prove unsuccessful, but within the world of horror p*rn it implies otherwise. It seems using your “crazy eyes” gets the chicks to smoke your ham. We flash between the two couples copulating The punk rock sister, played by Daisy Tanks of Swallow My Children fame, joins in with Rob to keep a threesome in the family and the fun continues until you blow your load in your sisters mouth. Meanwhile in the next room Vanessa’s boyfriend does not conclude with such a happy ending. Sure he gets blow his big lollipop all over lollipop girl but he also gets axed repeatedly. Every orgasm comes with a price I presume.

The next morning we find Vanessa still tied and gagged in the chair. Jaime Elles shows up to torment in another scene reminding one of Zombie’s character of “Baby”. Brother Robbie enters and he and sister have some sex to entertain Vanessa. A few external shots later and we flash to the Leatherface family feasting upon a buffet of entrails from Vanessa’s dead boyfriend. 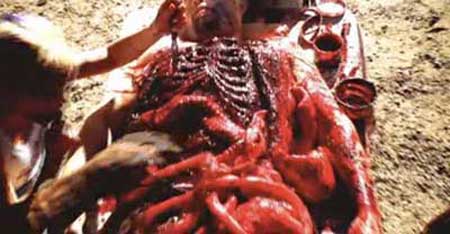 Vanessa and Leatherface do the deed, she gets him off, then stabs him in the leg. Perhaps there is a message on karma in there but let’s continue. Vanessa seemingly gets away, wakes up in the hospital and begins to relate her horrific story to a detective, played by Herschel Savage. The detective interrogates her, takes some revealing pictures of her naked body for “evidentiary” purposes, and Vanessa falls asleep.