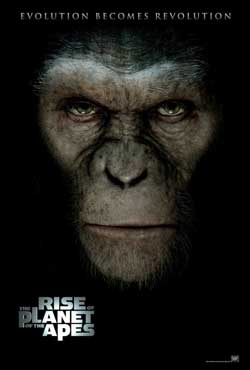 An origin story set in present day San Francisco, where man’s own experiments with genetic engineering lead to the development of intelligence in apes and the onset of a war for supremacy.

I think it’s safe to say that The Black Saint was feeling at best, dubious when he heard of this reboot of the “Planet Of The Apes” series. I mean Tim Burton gave it the old college try & he flubbed it big time. And I’m talking Big time people. So here we are in 2011 & here comes Rupert Wyatt & his version of the events that took place in the fourth Apes film “Conquest Of The Planet Of The Apes” which detailed how the apes took over the Earth. I can pleasantly say that not only does “Rise..” eclipse all of the previous Apes films but it’s the best movie I’ve seen so far this year. 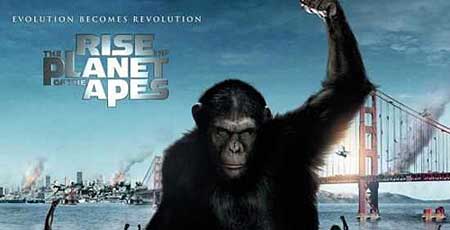 The film stars James Franco as Will Rodman, a scientist who for five years has been working on a cure for Alzheimers. Apparently he has found it as the film opens. It’s called “ALZ 112” and he has been testing it on various simians. It is only working on one of them, Cornelia (A nice play on Cornelius from the original film). Cornelia is extremely smart, as smart as a teenager at the very least & getting smarter everyday. She is deemed ready to display to shareholders who are waiting to invest big money into the production of AlZ 112. Unfortunately, when assistants are sent to pick up Cornelia to show off her intellect, she becomes very agitated & refuses to leave her shelter. Going as far to break out & attack those around her and eventually crashing through the window of the meeting room where the shareholders are meeting and getting shot to death by security.

Will’s boss, Steven Jacobs (David Oyelowo) is understandably upset and Rodman is at a loss as to why Cornelia went wild. Rather than stop the research completely, Steven allows Will to continue his work but at home, not in the facilities he’s been working at for the last five years. While cleaning out Cornelia’s enclosure, the reason for her outburst is explained. She had a baby chimp hidden in the room with her. She had given birth without anyone knowing of it & was protecting her child. All of the other apes were put down after the fiasco with Cornelia & Will is informed that the baby will be killed also if he is discovered so he “Adopts” him & christens him “Caesar”. Will soon finds out that Caesar has inherited his mothers intelligence & has expanded on it. He is much smarter than his mother is & growing smarter every day. This gives Will an idea, he proceeds to give his Alzheimers stricken father, Charles (John Lithgow), a dose of ALZ 112 hoping for the best. The next morning he finds his father playing a classical piece on the piano as if nothing is wrong. He claims that he feels great and is back to normal. Will immediately goes back to the research facility to tell Jacobs that he has the cure for Alzheimers & can prove it. 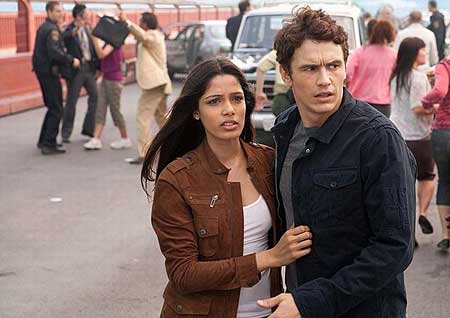 All is well for a while until Charles starts exhibiting signs of his Alzheimers returning (He attempts to cut a piece of fried egg with a fork handle rather than the other end. It’s a poignant scene because Caesar gently takes the fork from him & turns it around in his hand. At one point, Charles goes out & tries to drive & smashes into two cars. His neighbor immediately runs out & pulls him out of the car & begins to berate him violently. Caesar sees this & runs downstairs to rescue Charles. He chases the neighbor down until he finally catches him & pounds & bites him feverishly. Will drives up & asks Caesar to stop & Caesar goes over to Charles & hugs him protectively. Because of this action Caesar is taken to a compound run by John Landon & his son Dodge (Brian Cox & Tom Felton). Will is assured that Caesar will be well taken care of but that doesn’t turn out to be the case. In the interim, Will takes some tests & discovers that his fathers immune system has figured out a way to conquer the serum & subdue it’s effects on humans. So Charles is slowly reverting back into his previous state of being, slowly losing what’s left of his mind. He starts work on a new strain of the serum & eventually comes up with what he calls ALZ 113. He tests it on his dad & sits with him overnight to monitor his progress. Unfortunately, he finds his father dead the next morning. The virus has seemingly failed. But in actuality (as we find out) it doesn’t hurt simians at all. It has the same effect on them that it did on Cornelia & Caesar. It makes them much smarter. What it does to humans is turn to a sort of lethal virus that kills all who come in contact with it.

Caesar slowly but deliberately begins to win over the other apes at the compound including a massive Gorilla that initially wants no part of it. Eventually he teaches them to understand his wishes & ingeniously escape the facility to make their way to the research center where Caesar palns to release the serum (Which is now in vapor form) to the apes being tested there. Soon Caesar has a virtual army of apes running through & over the streets of San Franisco, headed towards the Golden Gate bridge…but why? 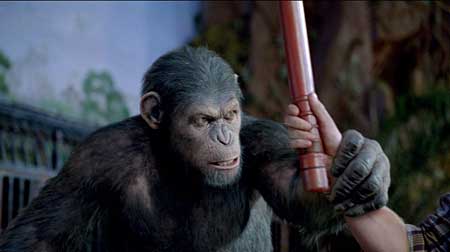 The resulting showdown between the apes & humans is thrilling. The ingenious way Caesar has the apes stay high up on the bridge where they are covered by fog & cloud cover is brilliant. The way they manage to circumvent most of the bullets being shot at them is exciting as well. I was worried about the CGI apes but they were beautiful to behold & you will believe that these are real apes not computer generated images most of the time. In the end, Caesar gets what he wants & while it doesn’t seem like much initially, the end credits show you exactly how apes took over the Earth. Stick around for a few secs after the credits begin to see how this happens.

There are lots of little homages to some of the films of the original “Apes” canon. One scene has a TV playing the original “Planet Of The Apes” in the background. Caesar has a Statue Of Liberty toy, Cornelia is called “Bright Eyes” (A reference to the third film “Escape From The Planet Of The Apes), The water hose torture & Felton even gets to recite the famous line “Get Off Of Me You Damn Dirty Ape” at one point. He doesn’t do the line justice by the way. Freida Pinto plays the love interest but she’s basically eye candy, beautiful eye candy but eye candy never the less.

“Rise Of The Planet Of The Apes” is one hell of a great movie. It pretty much does everything it sets out to do & excels at all of it. The audience I saw it with laughed, applauded & even cried a little bit as well (I don’t cry people, so don’t even ask). In addition, I saw it in a packed venue as opposed to the 30 or so people that I saw “Cowboys & Aliens” with. A great sign for the weekend box office I hope. All of the performances are top notch but the best performance is given by the one actor we never see, Andy Serkis. He performed the motion capture for Caesar just as he did for Gollum & King Kong. He has it down to a science now & he is so under appreciated by audiences who don’t know that he gave these characters life. The CGI is top notch as well. There are scenes of Caesar just glaring at someone in brooding anger that made the audience uneasy because of the sheer power coming from his eyes.

The Black Saint is happy to give “Rise Of The Planet Of The Apes” five shrouds. It’s not only a amazingly entertaining film it’s also a technical wonderwork with scenes of apes fighting humans that are so realistic that you would swear the production just trained a couple of hundred apes for the movie. It is so much better than I expected & I suspect you guys didn’t think much of it from the trailer either. Trust me, it’s a truly great film and the best film I’ve seen this year so far. It demands to be seen…so see it!