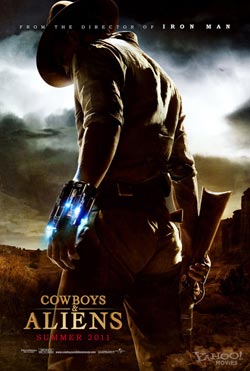 A spaceship arrives in Arizona, 1873, to take over the Earth, starting with the Wild West region. A posse of cowboys are all that stand in their way.

The buzz on “Cowboys & Aliens” seemed to herald it as THE Summer blockbuster to see this year. After all how could it go wrong? Daniel Craig (007) and Harrison Ford (Indiana Bones..I mean Jones) playing the two lead roles. A glut of great character actors filling in key roles. Steven Spielberg executive producing, Ron Howard & Brian Grazer producing. A script written by Damon (Lost) Lindelof (Along with four other writers). A great title based on a comic by Scott Mitchell Rosenberg. How could they mess this up? Well, they didn’t actually mess it up but this assembled talent comes really close to botching up the whole thing. As it is, it’s just OK but I expected so much more. 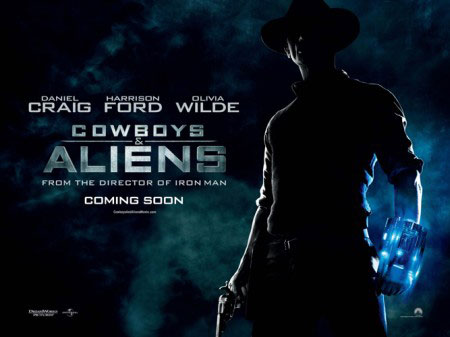 I think it’s fair to call this movie (As the filmmakers have already) the first big budget “Mash up” movie. Taking two disparate genres & blending them together into a cohesive & entertaining film. Daniel Craig stars as Jake Lonergan who as the film opens, finds himself stranded in the middle of nowhere with a bleeding scar on his right side, no shoes on his feet & a metallic bracelet attached to his left wrist. As he struggles to get up & figure out where he’s at and why, he’s surrounded by some armed scalawags that figure him to be easy prey. Unfortunately for them he’s not & he makes quick work of them. After appropriating some boots, weapons & a horse from them he rides into the town of Absolution, Arizona. A town that is run by the local cattle baron, Woodrow Dolarhyde (Harrison Ford) & his young punk of a son, Percy (Paul Dano). He is taken in by the reverend Meachem (Clancy Brown) & has his wound stitched up. After some back and forth with Meachem regarding who he is (Jake doesn’t remember), he decides to pay a visit to the local saloon. As Jake is having a drink he hears gunshots from outside where Percy is raising hell along with some of his father’s men. Percy is reminding everyone who he is & more importantly who his father is. One of the errant shots breaks a bottle in the saloon & the owner Doc (Sam Rockwell) comes outside to protest. Jake proceeds to belittle Doc in front of the town & notices Jake watching intently from the sidelines. Percy approaches him & is greeted by Jake with a knee to the nutsack. Jake walks away but Percy decides that Jake needs to be taught a lesson & fires a shot at him which misses and hits a marshall instead. This leads to Percy being arrested by Sheriff John Taggart (Keith Carradine). Percy’s gang leaves to alert his father of what’s happening as they take Percy to jail. Once at the jail the Sheriff notices a “Wanted” poster with Jake’s name & face on it. Apparently Jake is being sought for robbery & murder as well. So back Taggert goes to town to arrest Jake.

At the same time Taggert arrives to arrest Jake, so does Percy’s dad Woodrow. Woodrow demands that his son be released & of course Taggert refuses. As this scene is playing out, bystanders notice some odd lights coming down from the sky right at them. As they get closer the people see that they are flying vehicles of some sort & they start firing on the townsfolk. As people scatter, the ships lasso some of them & abduct them. This scene is pretty cool actually for the way it segues from a dramatic showdown between Ford & Carradine to a alien attack scene in one fell swoop. i also liked the fact that the aliens used lassos to capture their prey & not some beams of light that I’m used to seeing in alien attack films. granted their sort of metallic glowing lassos but they’re lassos nevertheless. As various townsfolk are abducted (Doc’ wife, Taggert & Percy among them) Lonergan’s mysterious metallic bracelet lights up & he realizes it is a weapon that can take down the spacecraft. So he blasts one out of the sky as all the other ones escape. Upon investigation of the downed aircraft (Which looks like a metallic dragonfly), the townsfolk see footprints leading away from the ship. And the footprints aren’t human.

It’s in the first 30-45 minutes of the movie where my interest was held the longest. I really got into the whole western vibe of the piece & I wanted to learn more about the town of Absolution & it’s population. But the movie is called “Cowboys & Aliens” for a reason so we follow Jake, Woodrow & a small posse of men as they follow the tracks the pilot of the spacecraft left in their attempt to rescue their family members. They are accompanied by Ella Swenson (Olivia Wilde) who seems to know a lot more about Jake than he does. It is here where the film began to fall apart for me. It slows to a crawl as the cast get to know each other & Woodrow as well. As Ford plays him, he’s a hard man with a soft, chewy center. I would’ve preferred it if he stayed hard throughout the film but it wasn’t meant to be. In addition, Jake is slowly beginning to remember his past. Running into his old gang during the pursuit of the alien helped him just a bit. So does Ella, who refuses to tell him what she knows about him but offers tantalizingly irritating clues. And of course, what is a cowboy film if it doesn’t have some Indians in it to spice it up a bit? The posse runs into a tribe of Indians who have also been attacked by the aliens & they are none too happy about it. 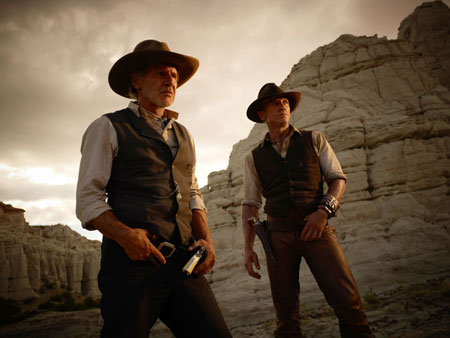 Eventually, through a lot of talk & a little action the cowboys & the indians find a common ground & decide to work together to combat the alien menace & rescue their family members. The final battle takes place in the last half hour of the film & while it is rousing it’s not exactly anything we haven’t seen before. Here’s where the problem rose for me & I expect for a lot of you as well if you see this, It’s all been done before. Maybe not in the year 1873 (The year this takes place in) & maybe not with cowboys & indians but you’ve seen it before. There is some mystical indian mumbo jumbo thrown in to help Jake remember who he is & Ella has a secret that once revealed is sort of stupid actually but that’s basically the only real difference between this & movies like “Independence Day”.

One thing I’ll say for the movie is it doesn’t skimp on alien action once they’re introduced. These guys don’t hide & as a matter of fact are extremely vicious & violent. They rip & tear through a lot of the cast with gleeful abandon. The alien design is different too. They are big & have an almost insectoid appearance to them. Along with really long claws & those cool “Wrist Blaster” thingies that Jake has on as well. But why are they here? And why are they abducting humans? What the heck do these guys want? You’ll have to see the movie but even when you find out you’ll wonder “Why”? I thought their purpose on Earth was dumb and not fully explained. The film looks great & the effect work is topnotch as is the acting but five minutes after it was over I found myself thinking “What was so special about this movie”? And I couldn’t answer the question. It’s not a bad movie, it’s just not a very good one. Average at best. The aliens were the best part of it & thankfully there is a lot of action in the last third of the movie to wake you up but I really preferred the western aspects of the film & I would’ve liked to see a movie more about the town of Absolution & less about aliens attacking it. 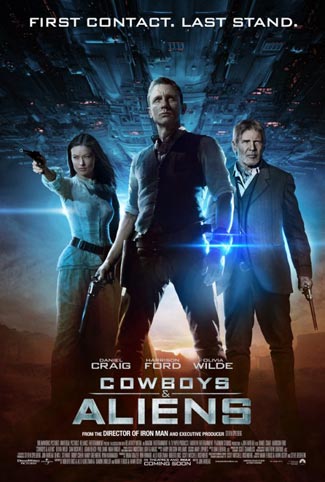 The Black Saint is (Begrudgingly) giving “Cowboys & Aliens” 2 1/2 Shrouds. I was initially going to give it less but the final battle saved it from condemnation. A great cast & some good action help it a lot but ultimately it’s just an OK movie, not the blockbuster the studio thinks it is. That’s too bad because with a little bit more cohesion to it’s script & some more attention paid to certain aspects of the script (Like killing the aliens, Sometimes it takes dozens of bullets to put them down, other times a well placed crack to the head with a bone(!) lays them out) it would’ve been a lot more fun. I suspect that after a big opening weekend, it’s box office take will plummet in it’s second week. It’s OK but it could have been so much more. See it only if you must see everything there is to see this Summer. Otherwise, save your money. 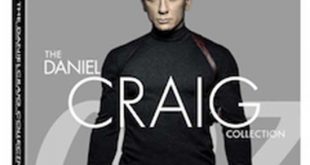 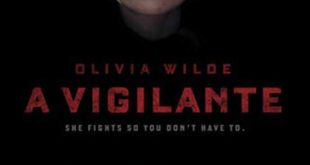