Film Review: The Mummy: Tomb of the Dragon Emperor (2008) 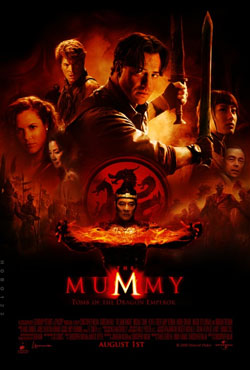 The third installment in the Mummy franchise takes archaeologist Rick O’Connell (Brendan Fraser) all the way to China, pitting him against an emperor (Jet Li) from the 2,000-year-old Han dynasty, who’s returned from the dead to pursue an evil quest for world domination. This time, O’Connell enlists the help of his family — including his wife, son and brother-in-law — to quash the so-called Dragon Emperor and his abuse of supernatural power.

Back for another round filled with mysticism, adventure and Indiana Jones style heroics, Brendan Fraser joins Jet Li for a wild on screen tale of Chinese legends and a quest for world domination. This time we get the whole O’Connell family as Rick is accompanied by his wife and son Alex per the invitation of the British government to transport an ancient relic called the “Eye of Shangri-la” back to China. Direction helmed by Rob Cohen, The Mummy installment 3 stands as one of the most exciting in the series yet. It’s big, its epic, it’s just a fun film filled with creatures, more mummy magic and an emphasis on Chinese legend.

I really enjoyed this film, as having enjoyed the previous 2 Mummy movies. Now being a huge Jet Li fan, It’s was a bonus to see Jet play a villain role in this on-going franchise. His presence is always felt on screen accompanied by lightning fast moves. It also appears that Jet has secured a firm hold in the Hollywood ranks playing these type roles in big features. His role was not unlike his role in the film “The Forbidden Kingdom” Taking a different turn than the previous 2 films, this time we are knee deep in Chinese legend. Complete with more armies of the undead, an evil warlord emperor, magic, adventure and mummies of a different nature. Jet Li spends most of his time covered in mud and rock as he sets out to gain immortality, regain his form and lead his evil army to rule over China once again. No shortage of special FX on this one. Many of the FX actually involve Jet Li continually trying to keep his form and throw a few fire balls for good measure. One of the highlights include Jet’s ability to transform into various mythological creatures including a 3 headed Dragon and a few others that I can’t place the names. Brendan Fraser is his usual dynamic self both action hero and comic relief. He lives up to his previous roles with style and finesse.

Many times during the film I imagined this as the Indiana Jones film that Kingdom of the Crystal Skull …wish that it could have been! We got tombs with darts flying out, spraying acid and swinging god knows what from the ceiling in effect from unwelcome intruders. As time has passed between the last film, we now have a predecessor to the throne as Rick’s son Alex (Luke Ford ) is in full swing with his tomb raiding, relic searching self. Being a new face to the franchise, I can’t say he steals the show from Brendan but he does give it his all.

The film ends much like big budgets of this nature. We have armies pitted against each other and realized by magic, we have the hero to villain conflict, the sacrifice, the newly realized love interests, and the defeat of evil and triumph by the pure of heart. eVen though those elements are derivative, I think the formula works which is why its repeated time and time again in action films.

Does this mean no more Brendan? Only time will tell, but it does provide a new blood to take over the franchise with a young fresh face. We even have some new creatures making an appearance much like you’d see in a Van Helsing film. Yep the Yeti’s are awakened and are kicking ass. The film really does a great job at having fun with the action, providing the ever popular close calls, impossible feats and dynamic interactions. The music and score by Randy Edelman is fantastic driving the action from scene to scene and really capturing the essence of all the events going on with its nonstop pace.

This film can be enjoyed by the whole family. The horror elements are really mild and more driven towards excitement and Hollywood style theatrics….so I’m guessing the kids will even enjoy the werewolf like Yeti’s. I can’t complain myself. I’m a sucker for these type films and often they are great for getting the family out of the house to see in theaters. Sorry to hardcore horror fans, if its not your boat…but I for one loved every second of it!

The DVD I’m sure will be played more that a few times, so its a good purchase. Mummy 4? probably so..but we’ll have to wait till next round.