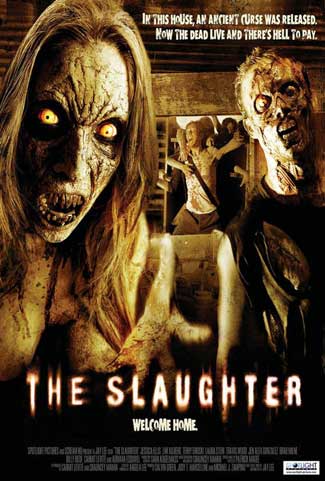 A turn of the century ritual to raise the feminine evil goes horribly awry and leaves a she demon dormant on the ceremonial grounds. Sixty years later a young couple moves into a house built on the ancient grounds and their daughter’s murder leaves the house abandoned for yet another forty years. Now, six fun loving college students are hired to clean up the house for a greedy real estate mogul who plans to sell it for a large profit. They unwittingly awake the demon and only the ultimate sacrifice can save the world from a future of unspeakable evil.

Directed by Jay Lee, “The Slaughter” wastes no time into getting into the goodness of cult chanting beautiful women who quickly disrobe and stab into some form of sacrificial offering. The goal? To raise an age old she demon who also happens to be pretty well endowed and sports a nasty ass face. None the less, this is one smoking hot demon who appears naked throughout the whole film played by hottie actress Adriana Esquivel. Currently at present day, a group is hired to renovate and clean an old house that was abandoned by previous owners 40 years back. The event was shrouded in mystery as an 8 year old was killed ceremonially while the mother committed suicide shortly after. The group consists of your usual band of young adults who while primarily there for a job seem to be additionally caught up in college debates, disdain for the corporate corruption, smoking pot and having sex when the opportunities arise.

In typical horror movie fashion, they all arrive one at time further cementing their variety of character roles much like you’d expect from a Scooby Doo movie. We have the couple Dana and Tyler, Razz the pot smoker, Iggy the college intellect brother and the wonderfully dysfunctional couple of Brandon (Travis Wood) and Heather (Laura Bach). In case your looking for the antagonistic d*ck of the film…yep that would be Brandon. Macho up front and a wimp anytime anything remotely frightening pops up. Heather (Laura Bach ) …(also one of of Horrornews.net Vamps) smokes the second she appears on screen with a rather shallow sexed up character role that seems more interested in getting it on than really anything else. Dana and Tyler are the level headed couple who also set up the job for hire. Iggy, Tyler’s brother tends to spout off more philosophical quotes and dialog than any viewer can keep up with. 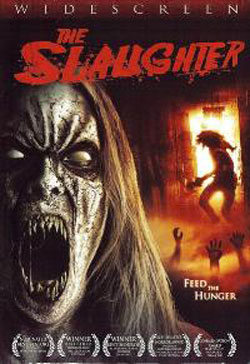 This apparent insightful talent of his also serves a sense of humor in the film later on. Director & writer Jay Lee has a soft spot for nostalgic 80’s films. While The Slaughter is loaded with cheese, it really delivers on it in surprising ways. For those who are keeping tabs…Jay went on to create “Zombie Strippers” in 2008. ( A horror comedy favorite of mine!) 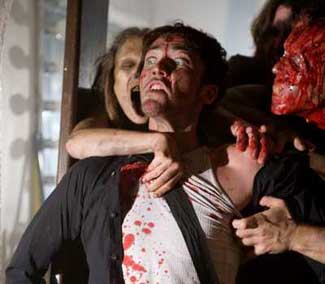 Stevens is the pretentious narcissistic jerk of the film who also happens to the one who hired them all for the job. His assistant Alexandra is hard tongued, rude and obviously taken advantage of by her employer.

So in a nutshell that’s the characters of the film. Upon cleaning out the basement an old book of ancient tomes is discovered who Iggy just so happens to be able to read. The old tome is the same one used by former cultists to summon the she demon. Madam Izriah the previous house owner and author of the book’s transcription is the spirit that haunts the halls. The presence of others has set in motion some of the rituals that began 40 years back. The rituals are supposed to release the demon into the world and in turn release unspeakable evils on mankind. The demon who await the ultimate sacrifice will then rule the earth for all time. And guess what? All it take is an act of sex to start the motors. Well Brandon and Heather cover that department as we get a Laura Bach-in-action moment to relish in.

The story comes full circle in a 80’s style “awakening” of the demons sort of take. This hot fully nude demon appears to each of the occupants and inflicts some form of “Freddy Krueger” style death act. We get a blured telling that she is summoning the powers through the use of fire, earth and water kind of crap…but regardless it’s just opportunities to kill off the kids in a paint by numbers kind of way. I must say though I was surprised at the cleverly cool practical effects gags used. We get one who dies while being pulled into a box, another who dies in a fireplace while his face melts off and a few more tasty executions for kicks. The Fx work had a bit of old school Raimi thrown in which used real world effects combined with some stop motion camera work. As a result, the kills were pretty cool and surreal in there skipped-frame look. 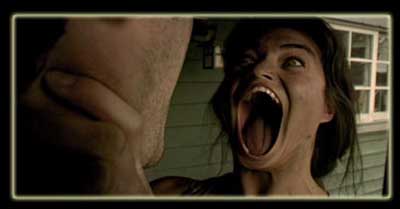 The demon face-work was outstanding and the film actually ramps into a horror comedy by the 3rd act. My favorite portion was a dialog exchange among actors who compared which type of zombies they were going against…the slow moving Romero zombies or the overactive aggressive zombies. This alone is probably worth the wait past all the formalities of the film which almost feels like 2 movies combined. Hell, I waited on seeing this one for quite some time and in the end thought it wasn’t a bad film at all. 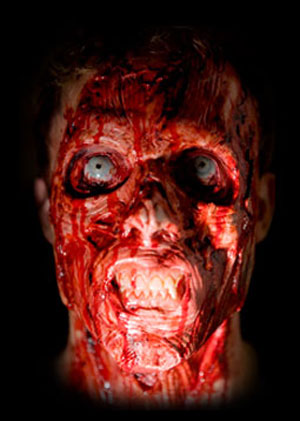 Of course reviewers will have a field day with certain aspects….but stick with it, it has some rewards to give through out. Your time investment will fall short on the acting but excel in the visual fun. Have at it! 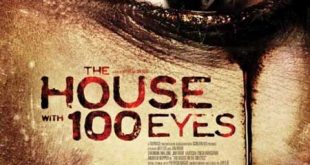 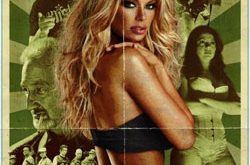