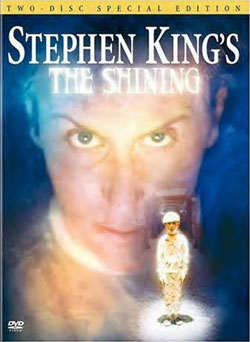 A recovering alcoholic must wrestle with demons within and without when he and his family move into a haunted hotel as caretakers.

Based on the novel by: Stephen King

Hello, “constant viewers.” This is for what some would call the re-make of the adaptation of Stephen King’s The Shining. I personally do not subscribe to the terminology of “re-make” for this particular film. This was Stephen’s to begin with. He just made it the way he wanted to see it done. In the words of (the) King himself, “the Stanley Kubrick version was not scary.” He wanted to see king done right and (as he stated in the Maximum Overdrive preview), “if you want something done right, you have to do it yourself.” I, myself am a fan of the Stanley Kubrick version as well. Although, I’m a huge Stephen King fan and I have to admit, the Stanley Kubrick version was disappointing in this aspect. Stanley practically re-wrote the story on a daily basis. 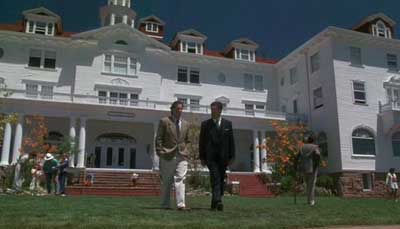 In this version, the film itself is written in novel form, made for television (such as The Stand, The Golden Years, Storm of the Century, Rose Red, IT and Nightmares and Dreamscapes). This particular visual novel comes in three parts(and a two disc set. One double sided). Unlike the condensed, Kubrick film, the real horror takes a little to get going, but once it does, it’s relentless. Almost pushing the boundaries of what can be shown on television.

This retelling is told straight from the original Writer’s mouth. Much more from the novel is added and even some things that were not present, such as Alcoholics Anonymous. Stephen said he did not know of this group as he wrote the novel, but wanted to add it in this version. Sure, a lot of people are used to seeing Jack Nicholson and Shelly Duvall. On the contrary, I believe that Steven Weber (Dracula: Dead and Loving It, Tales from the Crypt) and Rebecca De Mornay (The Hand that Rocks the Cradle and the Mother’s Day re-make) did a swell job as replacements. Stephen said that since before the original Stanley Kubrick version was made, he always saw Rebecca playing Wendy. She handled it quite well in my opinion. If I have any complaints in the acting department (especially compared to the original film), it was from the new Danny Torrence. He was bland at times, but overall did an okay job at taking over the roll of the endangered child at the hands of his alcoholic father.

As one would hopefully expect, this was made for television. There is no swearing (such as bashing Wendy’s brains right the f*ck… in). That does not mean it lacks in anything. The disturbing family violence is still full intact, only by television’s standards and practices. A little trimming also had to be cut for time purposes only. Stephen fought to keep everything in this feature as it aired that had to do (detrimentally) with the story. The networks gave in and let him. There is still gore for all of the hounds that may think it is completely absent from this version. Rest assured, the king delivers the bloody goods. 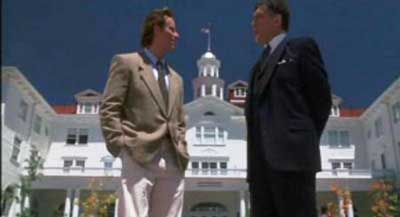 In this version (as with any of King’s novels), we get to know and love the characters very well through the first part of the film. Jack actually starts out completely sane and digresses into madness as he stays in the overlook Hotel (actually called the Stanly Hotel, which gave him the inspiration for the film and filmed on location). The film opens with a familiar face to King followers as Pat Hingle (Maximum Overdrive) shows Jack the boiler room of the Overlook Hotel. Shawnee Smith (The Stand, Summer School, the SAW series) makes a cameo, along with Sam Raimi, Miguel Ferrer (The Stand, The Nightflier) and Frank Darabont (Director of The Shawshank Redemption, The Green Mile and The Mist). Director, Mick Garris (Sleepwalkers, The Stand, Riding the Bullet and the upcoming Bag of Bones adaptation) also makes an appearance. His name is Hartwell, and he’s an alcholic. Of course, Stephen’s own obligatory cameo is present as well.

Some of the differences between the versions are the lion trees that come to life and stalk Danny (left out of the original film, yet present in the novel). There is also no hallway of furniture floating blood. One of the major differences (but, of course stays true to the book… and why wouldn’t it? Stephen write this himself) is Tony. In the original film, he was the “boy that lived in Danny’s mouth.” In this version, Tony takes the form of a spirit like human, that is quite older than Danny. He is more of a guidance apparition. Jack’s ax is replaced with a large kro-kay mallet (yet still effective all the same). Mick and Stanley’s directing style is also different( they both have their own ways of handling the visuals). There is only one part that resembles Stanley’s direction in this version (during a hallucinatory scene). The rest is all Mick. “Here’s Johnny” is replaced with a simple, “BOO!.” The three little pigs are not mentioned here and a wolf mask pops up from time to time. The score is quite different, but they are both creepily intriguing all the same. The woman in the bathtub (played by make-up artist, Cynthia Garris) is also much more creepier in this version. Subliminal tributes to other King films are also present (Pet Sematary, if you can spot it) 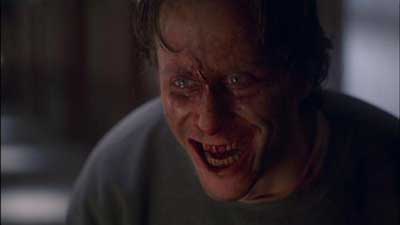 The extras on the DVD include a commentary with Mick and Cynthia Garris, Stephen and Steven. There are also eleven additional deleted scenes. Overall, this is a must for any King fan looking to return to the Overlook after so many years. Stephen is now working on a sequel to the novel, which shows what happened to Danny as he turns forty and has a job in New York as a Doctor using his special “shining” gift. All in all, this film is absolutely worth your time if you can get over the fact that Jack Nicholson is not Jack Torrence, which seems to be the biggest issue of most viewers. I give this film, Stephen King’s The Shining, FOUR HORNS UP.