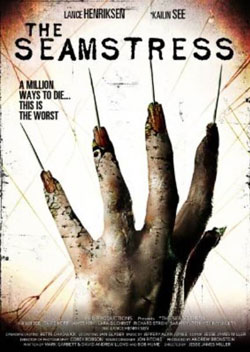 After vigilantes torture and kill a seamstress, she becomes a horrific spirit, hungry for vengeance — and when a group of young friends are trapped on the island where she died, she comes after them with her razor-sharp needles. But as one of the friends, Allie (Kailin See), searches for her missing father, she learns a terrible truth about him while her friends begin dying one by one. Lance Henriksen co-stars in this gory spine-chiller.

QUICK FIX:
Allie is in full-on season one Sam & Dean Winchester mode driving herself batsh*t, following dead end clues all over the place, searching for her missing father. After visiting some childhood friends and everyone getting all Scooby Gang on her, they narrow his location down to an island off the coast. The same island where years before, an innocent woman was wrongly accused of the murders of several children over a ten year period, then tortured and burned to death for her supposed crimes by a vigilante mob. And what do you think happens once Allie and her friends arrive on the island? That’s right, the mutilated ghost-corpse-specter thingy of the woman, now known as THE SEAMSTRESS is riding their asses like Zorro, dealing out revenge with her deadly needles of vengeance…..get the point?

RAMBLINGS:
Well, seems like today I have to eat a little raw crow. Yay me. Just less than a week ago, I was rambling on about how going into a new horror movie, a running time of over 90 or 95 minutes scared me and that it always made me apprehensive that it would take too damn long to get to the point, there would be too many unnecessary shots left in, etc., and that short and sweet (insert joke about my sexual proclivity here) was where it was at. Welp, that theory sure bit me in the ass this time.

At a scan’t 72 minutes, you’d think THE SEAMSTRESS would fit my theory perfectly. But yet while the set-up seems quick and to the point, it still takes about half the film’s short running time to actually get to any tangible action (i.e. – the deaths of any annoying characters) and by the time it does, it’s basically flipped into what should have been a cool supernatural stalk-n-slash that yet at the end of it all made me ask myself, “What the f*ck just happened??” Once the action kicks in, yes, it f*cking hauls ass – but not much makes a lick of sense in between, almost as if the action scenes were left in and any cohesive plot points were left on the cutting room floor. I’m not an idiot that has to have everything spelled out for me, but just a few questions answered (other than who really killed Daddy) would have been nice.

It’s almost like they said, “Oh sh*t, this is too simple-sounding. We better mix sh*t up and make it look like more, more MORE, and f*ck ‘em if they don’t get it!”. And, THE SEAMSTRESS herself left me with a few questions as well, especially since she did nothing more than whisper things that I had to rewind and turn up the volume several notches to hear. And while I suspect that it was supposed to add to the fright of the scenes, all it really did was turn me on, as the voice sounded just like Cinnamon from the last phone sex line I ran up my credit card with.

Kailin See (DECOYS 2: ALIEN SEDUCTION) did her thing and was very easy on the eyes, but confused the hell out of me with her performance…one second she’s a bitchy woman on a mission and nothing will stand in her way of finding the truth, and the next second she’s a vulnerable little girl crying on the shoulder of the chronic masturbator (the one in the movie, not me). Lance Henriksen was actually in this flick for more than 5 minutes of total screen time, so I guess this time he earned his place and name on the DVD cover. But for the love of all that’s good and holy, someone give this dude a major role, or his own MILLINNIUM flick to star in so he can regain his former glory and officially stop being a caricature of his former self by becoming Mr. Bit Parts these last few years? Please??

LAST WORDS:
THE SEAMSTRESS isn’t a horrible movie. But just like THE BOOGEYMAN or DARKNESS FALLS in years past – it had the potential, but for one reason or another never came close to living up to that potential, which makes it hard to watch and actually makes it seem like a really horrible movie. But for a low budget, DTV release, it does have its moments. The opening kill isn’t bad, and the eyes & mouth sewn shut gags are really cool. But there’s too much time wasted on setting up an already short movie as it is, missing plot points, unanswered questions, and answered questions that make no sense given the context of what came before it, for me to recommend this. It would have made a kickass stand-alone episode of THE X-FILES, and quite possibly an even better sidetracked episode of SUPERNATURAL, but as it is as a feature…not so much. Somebody pass me the ketchup – this crow is a bit ripe…