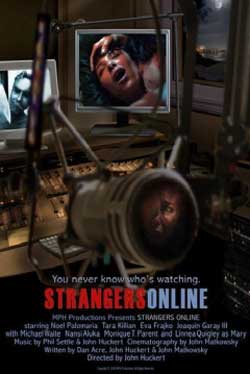 Haunted by the mysterious murder of his fiance 4 years earlier, Hollis Parker (Noel Palomaria) hosts a stimulating, late-night, internet/web radio program called Strangers Online, along with his co-host Mike (Joaquin Garay III). The sexy, irreverent show features everything from exhibitionists and wanna-be lesbians to desperate, masked cross-dressers and misfit miscreants. Meanwhile, Karen (Tara Killian), an overly infatuated new intern at the station decides she should be with Parker, much to the dismay of his girlfriend, Laura (Eva Frajko). When Parker decides to propose to Laura, Karen’s obsession with him explodes. She will stop at nothing to become his new bride. In the shocking, tragic final act, all the dark secrets of the past come out, and someone dies – live – on the internet. Featuring cameo performances by Linnea Quigley, Monique Parent, and world-renowned sexologist Dr. Susan Block.

With the advent of the digital age of media, people of all ages are able to communicate with others via webcams and online chat rooms that make privacy non-existent amongst those who continue to be involved with various forms of internet based integration of social means of today. In John Huckert’s Strangers Online, a young couple’s relationship is hindered by the overpowering burden of involvement online versus focusing on their real life social interactions.

Hollis Parker(Noel Palomaria) is shown in the beginning intertwined with his beautiful girlfriend Jenny(Nansi Aluka), and after he leaves to take a shower, the next scene features her covered in blood with no reason or explanation to how she got this way. The movie jumps to four years later, where Hollis runs his webradio telecast “Strangers Online” with fellow DJ Mike(Joaquin Garay III), and they do webcam chats with various viewers with strange sexual interests. The one that haunts Hollis the most is a masked man that proposes to his girlfriend, and when she declines he brutally attacks her, but then finds out it is all a show.

Hollis takes his work home with him, as his girlfriend Laura(Eva Frajko), often chats with a socially awkward web junky Zeke(Michael Waite). Laura is an exhibitionist, and enjoys the attention that Zeke gives her when Hollis is at work or still bothered by the death of his girlfriend from four years ago, Jenny. Things heat up when Hollis begins to become promiscuous, and fantasizes having sex with his insatiable therapist and ends up hooking up with his sexy coworker, Karen(Tara Killian). When Hollis’s private life is brought into focus due to some various acts of cyber stalking, he becomes more accepting of letting go of his heavily internet focused life, especially when the truth comes out about what happened to his former flame.

From jealous girls sabotaging relationships to various social aspects of web interaction of the present being displayed, Huckert’s film captures plenty of drama throughout the story of two young lovers trying to make it in a privacy stricken world. There are very few scenes of bloody happenings, which include a murder and a suicide both with the implicated same knife. As reviewed in the synopsis, there are various cameos such as Linea Quigley and Dr. Susan Block that pop up as guests via webcams during Hollis’s webcast online. The ambiguity of the beginning of the movie is wrapped up by the end of the flick, embellishing a shocking twist that strives to keep viewers’ attention throughout the flick. Even though Hollis’s past and present are fairly well explained, some of the secondary characters like Laura and Karen are very one dimensional characters that could have been better depicted so that the viewers can sympathize with their problematic lives.

Huckert’s Strangers Online is a horror story of the 21st century, as many peoples’ lives are infringed by the 24/7 advancements of internet broadcast. The film is a serious look at our privacy infringement in the digital age of media, with few moments of comical intervention to break the mood every once in a while. In the end, the main theme of the movie upholds that a separation of work and play must be kept distinct in order to be able to function in our continually social web streaming lives. 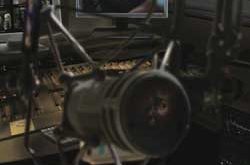