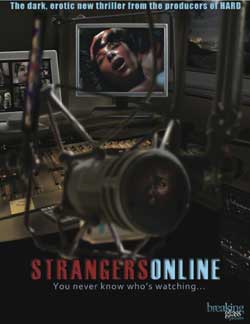 Synopsis:
Hollis Parker hosts a nightly web show that brings together sexual misfits from across the World Wide Web. Haunted by the murder of his wife four years earlier, he throws himself into his work, fielding questions from adoring fans, exhibitionists and quirky fetishists – all via their web cams. Then, a new intern at the studio shows romantic interest in Hollis, and what begins as a seemingly innocent crush turns into an unhealthy obsession. Though his show usually keeps him at a comfortable distance from his audience, Hollis soon learns that his final show may end in bloody murder – broadcasted live to all his adoring fans.
Told in the vein of “Blue Velvet” and “Body of Evidence.” “Strangers Online” resurrects a dying genre and shines a light on the darkened corners of the digital world, where sex, secrets and danger lurk in the shadows.

Special features for the DVD will include an audio commentary with John Huckert, deleted scenes, bloopers and an alternate ending.
For more information on “Strangers Online,” including requests for screeners, final DVDs and interviews with the director and cast, please contact Justin@bgpics.com. 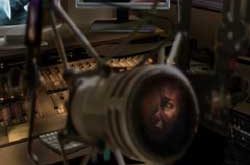