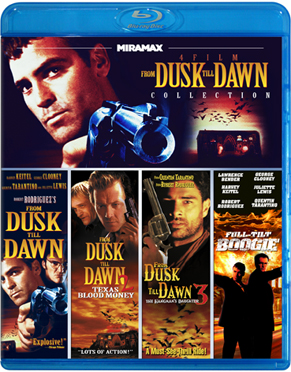 Another combo Gem, all 3 Dusk to Dawn films and a surprise “Fult Tilt Boogie” documentary….Now I’ve seen enough of the sequels to know that they are just NOT up to par with the original (for obvious reasons). But hey – 4 for 1 and all on 1 pack!……you never know when that Dust to Dawn marathon will come and you’ll be wishing you didn’t buy that cheeseburger instead. I love these 4 sets as they make my life pretty easy…In other words, I don’t have to search thru piles to find all the franchise films.

Catch our reviews on the films themselves – as we work our way thru movies about vampires and guns!!

Synopsis
FROM DUSK TILL DAWN
It’s nonstop thrills when George Clooney (The American) and Quentin Tarantino (Pulp Fiction) star as the Gecko brothers—two dangerous outlaws on a wild crime spree! After kidnapping a father (Harvey Keitel, Little Fockers) and his two kids (including Juliette Lewis, Due Date), the Geckos head south to a seedy Mexican bar to hide out in safety. But when they face the bar’s truly notorious clientele, they’re forced to team up with their hostages in order to make it out alive! From Robert Rodriguez and Quentin Tarantino, the creators of Grindhouse, From Dusk Till Dawn is explosive action entertainment!

FROM DUSK TILL DAWN 2: TEXAS BLOOD MONEY
Get ready for nonstop action when a bank-robbing gang of misfits heads to Mexico with the blueprints for the perfect million-dollar heist. But when one of the crooks wanders into the wrong bar and crosses the wrong vampire, the thieving cohorts one by one develop a thirst for blood to match their hunger for money. Ultimately, the last human burglar is forced to join with his arch rival, a Texas sheriff, in an action-packed, kill-or-be-killed battle to stop these evil creatures and save their own lives. Starring Robert Patrick (The Men Who Stare at Goats), Danny Trejo (Machete), Tiffani Thiessen (TV’s White Collar) and Bruce Campbell (TV’s Burn Notice).

FROM DUSK TILL DAWN 3: THE HANGMAN’S DAUGHTER
The latest bone-chilling installment of From Dusk Till Dawn reveals how this frightening saga all began. Narrowly escaping death, outlaw Johnny Madrid is on the run from the hangman…with the hangman’s sensuous daughter Esmeralda by his side. Along with Madrid’s gang, Johnny and Esmeralda embark on an adventure filled with colorful and unsavory characters who lead them straight into the fight of their lives. Also featuring Danny Trejo (Machete), and Rebecca Gayheart (Jawbreaker).

FULL-TILT BOOGIE
Go behind the scenes of the Robert Rodriguez cult classic, From Dusk Till Dawn, with this brilliant documentary. See just what it’s like to be on set with stars Quentin Tarantino, George Clooney, Harvey Keitel and Juliette Lewis as they bring their characters to life on the big screen. Through exclusive interviews, delve into every aspect of the film-making process—from the role crew members play to the unpredictable setbacks they encounter—and witness the magic that is From Dusk Till Dawn.

Special 4 set of Dust to Dawn available from Echo Bridge