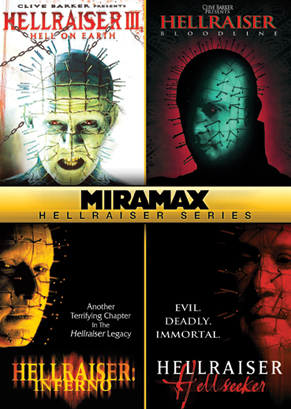 While we try and get to all the movies themselves – in which we HAVE per the single reviews, We know a great deal when we see it. 3 things – HellRaiser, Walmart, $5. The set of 4 are 3 really good Hellraiser movies…and as far as I’m concered, HR 3 is a standalone great. Those who experienced the early years, know that it took decades for #3 to even arrive on DVD, let alone boxed with 3 other HR releases.

Bloodline is the odd man out, but still contains some important details about the top box lineage. It’s proper name, the Lament Configuration….yep you betcha. We all scratched our heads at Pinhead in space…but hey ….it was still fun to watch right?

“HellRaiser – HellSeeker” – Was the more surreal verison of the series…boasting some borrowed Joel Peter Witkin inspired shots…that I for one really appreciated. The characters though were more short lived of which I wanted to see more of.

So I’m on this trend to trade in my old DVD’s for small box sets – Got films, but running out of space to store them all. This does the trick……

Ok, so you had enough of me?
Here is the studio synopsis:

Synopsis
HELLRAISER III: HELL ON EARTH
Joey Summerskill is an ambitious TV reporter whose life is changed forever when she witnesses the horrific death of a tormented teenage boy, torn apart by bloody chains. Determined to find the truth behind this gruesome vision, she discovers the Lament Configuration Box which opens the door to the Cenobites’ demonic world of pleasure and pain. Once again Pinhead walks the Earth, creating a new army of Cenobites from the transmuted flesh of his victims…his one desire—to reclaim the Box and free himself forever from the powers of Hell.

The fourth terrifying chapter of the wildly popular Hellraiser series chronicles the struggle of one family who unknowingly created the puzzle box that opened the doors of Hell—setting the diabolical Pinhead free to spread evil on Earth. Now, the family must fight to slam those doors shut again…but not before Pinhead wages one of his fiercest and most frightening battles ever.

HELLRAISER V: INFERNO
A spine-tingling thriller, Hellraiser: Inferno is the next inescapably terrifying chapter in the heart-stopping Hellraiser series! It’s the powerful story of a shady L.A. detective (Craig Sheffer, A River Runs Through It) who finds himself lost in a nightmarish world of evil when he solves the mysterious puzzle box that releases the diabolical demon, Pinhead. As those around him begin to meet tragic fates, he sets out to conquer the horrifying Pinehead and escape eternal Hell. Also starring Nicholas Turturro, Hellraiser: Inferno combines great special effects and relentless thrills.

HELLRAISER VI: HELLSEEKER
Pinhead is back in Hellraiser: Hellseeker, the next chilling chapter in the electrifying Hellraiser legacy originated by frightmaster Clive Barker!

When the puzzle box is once again solved, the devastating demon Pinhead and his legion return to unleash Hell on Earth and demolish all who dare oppose them. But standing in the way is Kirsty (Ashley Laurence, Hellraiser I, II, III)—the only person who has defeated Pinhead in the past—and it’s up to her to save the world from this ultimate evil. Also featuring Dean Winters (TV’s Rescue Me).