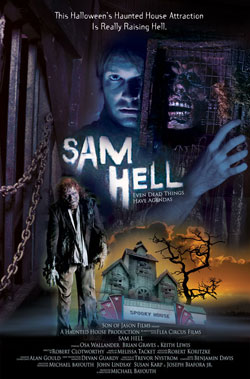 Sean, an energetic spooky-house worker, thought it was the coolest. It was basically a rotting corpse in a cage. It would work well in the Spooky House this Halloween, he thought. But sometimes things should be left alone. Sean’s co-workers, at the Spooky House, noticed the change right away. They could hear him talking to the morose thing as he restored it. His girl friend, Jill, just thought he was being funny. But somehow this grotesque discovery has crawled into Sean’s head and is there to stay. After some investigation, Jill finds an undead maniac, Sam Hell, has arisen and is back in his old stomping ground using her boyfriend as his murder puppet.

The Spooky House comes alive with paranormal activity to meet Sam’s twisted wishes. The headless bride in the mausoleum begins to move. The Jason dummy in the morgue room starts to grip it’s butcher knife. The mummified body in the pit of death begins to sketch skeletal remains. With the help from a paranormal bounty hunter and the bloodstained shroud of his victim’s clothes, they will battle Sam’s minions and the world of the undead!

Sam hell is an somewhat impressive micro-budget release from director Michael Bayouth and Son of Jason productions. With the backdrop of a local haunted house the workers prepare for there big opening day. Owner Sean brings back an odd looking relic after acquiring it from a local garage sale. The relic which is more or less a fake head in a mossy wooden cage ends up being quite more than just a decoration. The object starts to influence Sean to the point of a back and forth conversations and its power to transform Sean into killing his co-workers. His girlfriend, Jill Mathews suspicious of his mood changes begins on a quest to get to the bottom of this item and its history. The quest leads her to a mental patient, a sorrid tale of the past and an odd fellow who happens to know a little too much about the relic.

Sam Hell comes across well-acted especially with performances by Åsa Wallander, Brian Graves, and Mike Tillman and is backed by a decent looking set. The kills are a bit too low budget for my tastes but they work within the confines of the story. Most of them are simple knife gags (slasher fare) and some quick edits in between. They don’t go far beyond that. The idea of a haunted house setting is actually a great idea though with this being the 3rd I’ve seen in 3 weeks, it’s apparent that even “that” idea is becoming a bit old. Of course for any micro budget, haunted houses are a blessing as they are sets ready to go without investing in additional designs and costly production needs. I do try and be fair in reviews on small budget releases because I know what they entail. But for clarification sake, there is no sign of any high production value present.

The story itself to me, has a early 80’s feel and I would have liked to have seen more action from the villain than a simple fake head in a box. A highlight in my viewing was the performance by Keith Lewis who I swear is James Brolin’s twin. The plus to this production also comes from the nice music score backdrop provided by Jeffrey Michael. Here again is a case where I would recommend others to help support the independents by picking up a copy when its made available. Those looking for intense moments, pro makeup and clever kills simply wont find it in this production as the basis of this story verges more on suspense and back-story myths. My guess is upon successful completion of there first feature, we’ll be seeing more films from this group. Hopefully the 2nd round will better enable them to acquire higher budgets to explore more cinematic options.