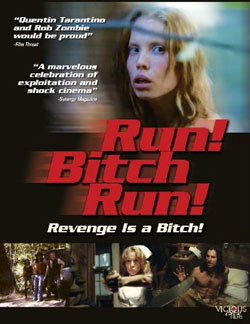 Catherine and Rebecca are two Catholic School girls going door-to-door selling Religious paraphernalia in order to pay for their books and education. Things go horribly wrong when they knock on the wrong door in the wrong neighborhood. Run! Bitch Run! is a throw back to the classic 1970’s Rape and Revenge films like ‘Last House On the Left’ and ‘Ms. 45.

There seems to be a outbreak of “bitch” movies on the scene lately. Though with a film title like “Run Bitch Run” you’d half expect a retro director like Tarantino to be behind it, but ultimately it comes across more like a re-vamped “Last House of the left” or recent film “Chaos” kind of filmmaking. There is nothing nice about this film. It is hardcore for hardcore sake. Though the main difference here is that the filmmakers went with visceral and grungy over cheesy gore scenes.

The 2 have been sent out into the cruel world as bible thumpers who’s innocence is no match for the brutal world they are falling into. After a nights stay at a local hotel, they are referred to a town called Mosely that is sure to be a great spawning ground for deviants who need the lords good word and maybe a a few religious trinkets to go with it.

Though it’s soon discovered that they are no match for the dregs, thieves and rudeness that awaits them and lands them at the wrong place at the wrong time. A crack whore who has stolen from her pimp is murdered just as the 2 are approaching a run down whore house. The timing proves to be there worst nightmare as they observe the act upon arrival. This leaves the owners with no choice but to hold them at gunpoint in which they also proceed to have there way with them. One thing leads to another and the remaining captive is taken into the woods for a chance to run before Lobo catches her and rapes her….nice eh?? Ya that sets the tone of the movie alright…but then again..this kind of film has been done before…and before..and before.

Though as the film progresses, its clear that the real purpose is a revenge film in the sense of “Thriller – A Cruel Picture” where the victim becomes empowered and pay backs a bitch.

We can get a sense from that where his interest lies in cinema. For writing and directing Guzman actually does a stand up job. The materials feels authentic enough to become part of the violence and sinister intentions that are notions of pulling an audience in. The subject matter may be too dark for most viewers which puts it instantly into a category of like retro style films that indulge into extremes. Points go to actors Christina DeRosa and Cheryl Lyone for subjecting themselves to the extreme nature of this film.

Both are very beautiful actors who downplay there looks for the character roles of being catholic school girls. But hey, there’s something hot about that aspect as well. Peter Tahoe is the perfect pick for his drug lord sleezebag character Lobo who might surprise viewers afterwards that he’s also played Jesus in a previous reenactment. “Run Bitch Run” is hard on the senses but is done with professionalism and intent. I’m not so sure you’ll see this one in Blockbuster…but extreme genre lovers may enjoy it for what it is. 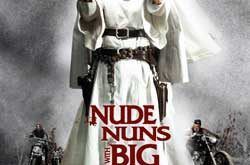