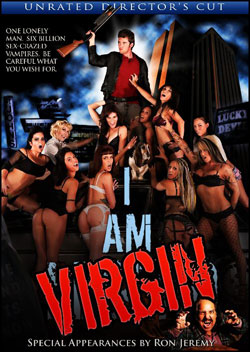 One lonely man, six billion sex-crazed vampires. Be careful what you wish for!

I am Virgin, directed by Sean Skelding is recent film marketed as a horror comedy sort of spoof on the “I am Legend” concept. The time is is the future when all that is left is a population of sex starved vampires….6 billion to be exact. Strangely enough though is in this film they don’t do much vampiring with every 10 minutes consisting of soft p*rn segments. Lesbians on lesbians, naked bodies, male vampires on 3 girls action and well you get the drift. The focal point of the film stars Adam Elliott Davis as Robbie in who we are told is the last living virgin. Now it doesn’t take too much thought to imagine the set up as he complains online about his virginity and then at every turn sees another sex act being performed.

Its also not like he isn’t the star of opportunity as hot female fang wearing minxes chase him about asking for sex and pleasure. Alone with his dog and a gun in hand, he explores the local city much like Charleton Heston from Omega Man.

What is funny about this, is that he becomes a voyeur to all these acts as they are taking place. Another thing that’s humorous is that all the leftover vampires sport perfect bodies in perfect shape and seem to do nothing more than have sex with each other. As a film there isn’t much of a plot, but a film like this isn’t really meant for that anyways. The acts are just a shade away from real p*rn with the exception of not showing any penetration per dark shadows and careful camera placements.

Sam seems obsessed with 2 things….his blog and sex. For some reason the internet still works but because he’s the only one on it he is considered the #1 site in the world. Second, he goes home and obsesses about sex and yet has a hard time acting on it when he’s exposed to it. By the end of the film he is well within his comfort zone with beautiful sensual babes offering all kinds of favorites and sex acts to him like a Greek god. 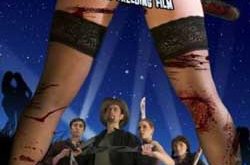