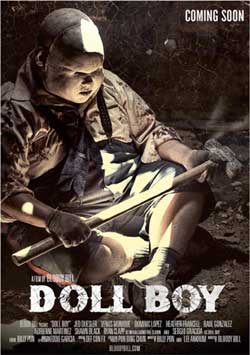 When a brutal daylight massacre leaves them bound and gagged in a remote, abandoned warehouse, eight young West Texans soon realize their minutes are numbered.

Doll Boy is a title that says it like it is. Director Billy “Bloody Bill” Pon is an obvious fan of 70’s films such as “Texas Chainsaw”, “Halloween” and “Black Christmas” in which Doll Boy is introduced with a helping of Grind house trailers. I’ve seen attempts before of adding intro trailers to a film project, but not quite as authentic looking as Bill’s tiny demented masterpieces like “Mister Fister” and “Circus of Dead”. These were alot of fun to watch, had the intended look they were going after and managed to also stay horrifying. I loved the pseudo advertisements and retro tag line calls. One would think that perhaps these could actually be the setup for 2 more films on the work bench. I’m hoping so. The important thing here is that the films are done artistically but not cheesy cheap ….if you know what I mean. Bill’s knack for framing and editing makes this all work and really is a pleasure to watch.

Now the film itself is deemed more of a short but it’s actually a shorter feature in disguise. What he’s left out for the interest of keeping it short is any real meaningful buildups. We are introduced to Doll Boy per a large fellow sporting clown makeup. We begin in what I call a “straight to the action and point” moment in the film where he reveals his captives in the back of a van who are ushered into a warehouse. No character build, no back story, no grab em and collect…just out and into the warehouse for future game and slaughter. As these victims are released, they brood about and collect themselves to find areas to escape. What they don’t know is that the big fat clown has collected them more for fun and game. Mainly just donning his creepy Doll marks and hunting them down one by one. The mask works , cuz it’s simple and not that cute on a overgrown sledge-hammer-welding beast. Doll boy as he has become, wields his sledgehammer with one intent. To smash in face and crush bone.

So it begins…..the violent hunt and hide and go seek really works on all accounts with simple premise, a great setting and intent to kill “simply because”. The director makes use of his environment in its distressed form which with perfect collective creepiness provides the simple childish nature establishing his character. We get some reveals thru Dollboy’s belongings and childhood toys. These toys remind me of, as if leather face was a close cousin who likes to drop by once in awhile for fun and trade. Dead child bodies, old corpses, damaged toys, …we get the sense that Doll Boy didn’t have it so good.

Moving on, the kills are of course gruesome and shot really well with cutbacks to the kill blows into the practical effects setups of faces being caved in. Slight touches like a reflection in a pool of blood and victim quick glances are enough to drive the moments home.

In closing, all works, and works to the benefit of the audience who I felt were us “more seasoned pros” of the genre who don’t think all films should be about young adults lost in the woods with relationship problems. The film begins in the same sense it ends, and the best part is that we realize that all is a part of fun and games for this dollish freak who does so just …because.

I think Billy “Bloody Bill” Pon is on to something that I hope to see brought into feature length productions if only for the sake of getting it on shelves and into the genre. We see alot of attempts but Bill does so with dead on insight and a great knack for film making. Perhaps the next magazine covers we see might be “all things” Bill. 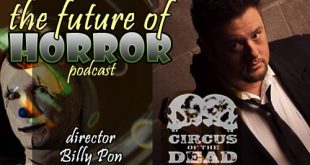