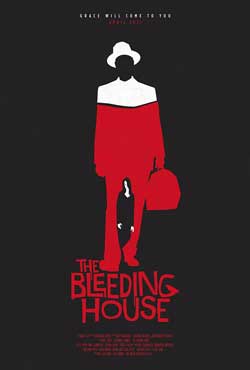 Meet the Smiths—a family full of secrets who keep to themselves on a back road outside a small Midwestern town. In this visceral, tightly wound horror/thriller, their lives are shaken when a sweet-talking Texan arrives on their doorstep on a mission for retribution. Will he succeed in his goal to bleed them of their sins, or will the family’s haunted past prove to be even more deadly than he bargained for?

Sometimes horror is best served when subtle. “The Bleeding House” is certainly a film that begins this way. An assuming normal family, a somewhat remote location and a rather boring existence (or so it seems) They all feel too comfortable for satisfaction. It’s pretty apparent right from the start that the family is hiding some dark secrets. Not the typical setup of a family who cannibalizes their visitors. No, it is this sense of foreboding that seems to have haunted the family for quite some time.

The parents take precaution, hide silverware and walk on eggshells around their adolescent daughter Gloria (Alexandra Chando) who only seems to be a measure off the status quo. Gloria’s Father Matt is having a hard time reestablishing his career with talks of a bar exam and a position that didn’t pan out. Though in these days (of economic crisis), that really is more the norm than the alternative. “The Bleeding House: is a slow grind that builds on this tension almost in a calculated way. When a polite stranger appears dressed in white sporting a rather southern sort of accent, the family puts up their best guard which is quickly eliminated due to the sincere nature of the visitor. He explains that his car has broken down and just needs help till the morning. In a typical situation this might fine and dandy, though we know as horror film, this is the usual kiss of death.

All seems well, all seems remarkably ordinary. This is when the director decides that its time to bring  on the protagonist element into the mix. Thru careful reveal we get more and more of the back story about Gloria. We also get the intended notion that she is one messed up little girl. Patrick Breen plays the stranger in white who calls himself Nick. Nick has other intentions for the family which include the reason why the film is called “The Bleeding House”. I wanted to make some comparisons to other films of this nature, but I think the comparison would only be in setup rather than full execution. Patrick Breen without really calling it a stretch to guess becomes the household antagonist. That stereotype is not entirely stable with Gloria also contributing her own twisted contribution to that role. The director Philip Gelatt took the full disclosure route in this film which is fine, maybe because there was so much ambiguity form the start. So viewers will almost get all their questions answered. There is horror here, but its not always visually geared. I think the horror is actually more a part of understanding origins and the nature of individuals.

As a movie, the premise may not be enough juice for some horror fans. It’s methodical slow grind is more in the pace of “House of the Devil”, so I know purely from response on that film, that some viewers just like things more involved. I still think the film is a standout offering on many accounts. Director Philip Gelatt is obviously more inspired by some of the old school directors in direction and storytelling. Maybe the 3rd act feels resolving but not inspiring. Or depending on your point of view, your iteration may be that Gloria is the real threat that seems to overcome the odds which is the true horror here. As vague as that analogy is, it also tells you enough without telling you too much. This is a debit directorial for Gelatt, so yo have to consider that there may have been outside elements that interceded which altered the intention a bit. I think he has a great handle on horror and will really bring us some killer future products. “The Bleeding House” is uniquely bland which in some ways is more horrific than a throw everything at you approach. I recommend this film  and found it quite unique in its own space.