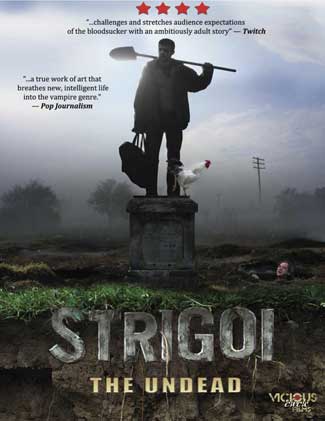 Breaking Glass Pictures will release director Faye Jackson’s vampire tale “Strigoi: The Undead” on DVD August 2 under the Vicious Circl Films label. The dark comedy follows the quirky inhabitants of a Romanian village who learn that there are vampires among them.

Synopsis:
After failing to start a life of his own, 20-something Vlad is forced to move back to his grandfather’s old farming village in Romania. Though the village seems like a typical Eastern European haven, a mysterious death suddenly thrusts Vlad into the heart of a murder mystery.

As he sets out to investigate, his trail leads him to the Tirescus — an ex-Communist couple who happen to be the richest landowners in town. Though Vlad is determined to confront the Tirescus, his quest takes a detour when he learns that the two bullies may be bloodsuckers in more ways than one…

“Strigoi: The Undead” puts an original twist on the vampire genre by introducing us to an ancient myth: Strigoi, the belief that people who’ve been wronged can rise again after death to seek justice and satisfy their thirst for blood. A deeply human take on an old horror story, this dark comedy explores the old world versus the new and delves into the heart of modern Romania.

DVD extras will include Jackson’s short film “Lump” and a trailer. 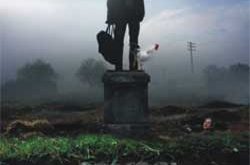