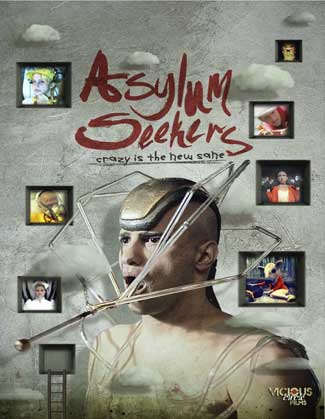 Synopsis:
Work, deadlines, family, terrorism, information overload … As modern life pushes the world to the brink of madness, six strangers decide there’s only one sane response: head through the door marked EXIT. It leads to a deluxe, exclusive, luxuriously-appointed mental asylum where a staff will wait on them hand and foot for the rest of their carefree lives. The problem? The asylum has only one vacancy. Now, the group of would-be patients will have to prove who among them is truly most deranged. Of course, not everything in the asylum is as it seems, and as the applicants turn themselves over for evaluation, they learn that the insanity has just begun.

“Asylum Seekers” boldly questions the ways society defines what is normal and what is not. Ajami takes the film’s characters – and the audience – deep into the rabbit hole to a place where sanity is not an option.