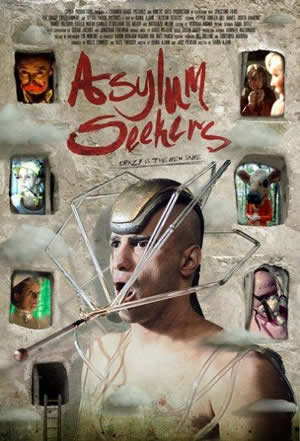 In an odd turn of events, six troubled individuals arrive at an asylum to find they must compete for the last remaining available space. Their only contact in the facility is Nurse Milly and her two orderlies and the ever watching, ever present, “big brother” authority known only as “the beard” and only heard through the hospital’s speaker system. The six become friends, enemies and even lovers as they face challenges to become the final patient; they are the Asylum Seekers.

Rania Ajami’s black comedy, Asylum Seekers, takes a different approach to the asylum based horror tropes; however, he exercising it more for the bizarre, comedic tones, leaving much of the horror elements at the front door. The concepts, visuals and characters are twisted and corrupt but they are played for laughs. For the most part, the results are silly and over-the-top but a few of the characters are far more developed than they first seem resulting in a very uneven, awkwardly paced film – a curiosity piece. The relationship that builds between Antione Raby (Daniel Irizarry) and Maud (Pepper Binkley) is surprisingly well done and some of the subtler aspects of Nurse Milly (Judith Hawking) are interesting but remain only hinted at and underdeveloped. The idea is novel – six incoming patients, one bed: only the most insane may remain – but the story is too outrageous for its own good. Or, perhaps, not outrageous enough as it may be a case of not taking the overall concept far enough. Either way, Asylum Seekers is not without merit containing some fun characters and interesting relationships but fails to deliver enough laughs or suspense to make the competition worth watching. 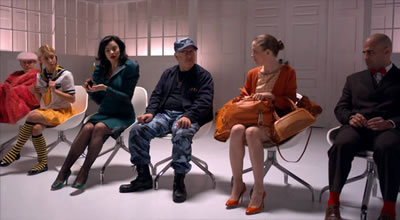 Somehow over the course of the film, the cast of misfits – who initially are annoying and unappealing – become engaging and heroic. Most of this is due to the two lead actors: Daniel Irizarry as Antoine Raby, a sexually psychotic virgin, and Pepper Binkley as Maud, a bored trophy wife who is losing touch with reality. It’s their characters and their relation ship that saves the film from obscurity – it’s the strength of the film. For the first half of the film, Irizarry’s Raby is the single most annoying character of the group. It’s just not clear what is going on with this character – the ticks, the squelching voice, the odd behavior. The character gets lost early in his mannerisms and fails to illustrate his true nature and faults. However, once the actor is allowed to tone these absurd character traits down a notch or two, he begins to shine as Raby, becoming far more compelling and watchable. Irizarry wonderfully expresses the inner turmoil Raby goes through as he begins to confront the feelings he developes for Maud. Pepper Binkley, likewise, takes an annoying character and brings a touch of innocence and mothering care to Maud as she also confronts her growing attachment to Raby. When the film is able to focus on these two characters, it sparkles. Their relationship is the highlight of Asylum Seekers. 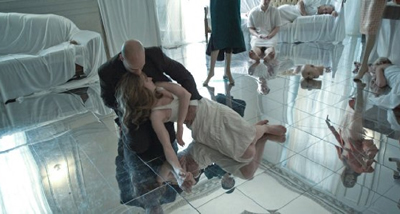 The rest of the cast do their best with the characters and the story they are given: some appear to merely play along with what their dealt and others bring a tough more to the role than is expected from the outset. Judith Hawking as Nurse Milly is just as silly as the patients coming through the front door; but, in a few choice scenes, she is allowed the opportunity to express a sense of complacency, being trapped and desire for escape that instantly elevates the character and provides depth. Unfortunately it’s far too fleeting. She is amusing in a smug, sarcastic way that entertains more than annoys for the rest of her time on screen. The rest of the actors portray their characters much like a skit on Saturday Night Live, but they remain in character for the entirety of the film. And they appear to be having great fun with it. Like Raby, Maud and Nurse Milly, they are all annoying as all get out at first, but each brings a subtle nuance to their role that allows their character to become more and more interesting as the film progresses. Still, for most, it never amounts to much. Stella Maeve is Alice a teen who is obsessed with computers, wanting to be plugged in – literally. Camille O’Sullivan is Miranda who extroverted to point of paranoia, obsessed with everyone watching her. Lee Wilkof is Paul who is convinced everything is a conspiracy. And Bill Dawes is Alan a confused rapper who is no longer sure of his gender or his race. The only character who never really gets to rise above their introduction is “The Beard.” It’s a twisty reveal that is well telegraphed and nowhere near as shocking as intended. 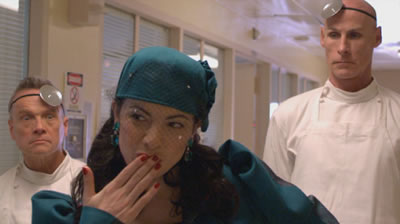 The story of Asylum Seekers is interesting at its core, but never lives up to its own promise. It’s an entertaining twist where the patients are wanting to enter into an asylum only to find they have to compete for the last remaining bed. There is plenty of care and attention paid to the characters but not enough is given to their plight or to the challenges they must face. The script tries to dance between the romance between Raby and Maud and the absurd contests they must endure. For as out-there as this film is with its characters, it doesn’t go near far enough to events these wacky, silly characters must encounter. Here, the story rests on its laurels and fails to challenge the characters or the audience. It doesn’t go dark enough in its black comedy. There’s no sense of danger, consequences or reward. It doesn’t go far enough into the roles to make it a character piece either. 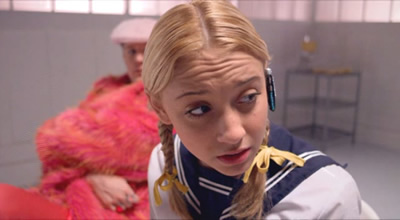 In the end, Asylum Seekers is a near miss. It’s a flawed film with missed opportunities and unfocused direction. Daniel Irizarry and Pepper Binkley bring their characters to life once provided the chance to do so and create a winning romance that is never given enough time to blossom. The bizarre character traits are too annoying at first treating to put off viewers from the onset and the twists are far too predictable. The contest they patients are challenged with are never as clever as the character or what they could have faced. Where the story falls a little flat, the actors rise above and give it their all. For that, Asylum Seekers works – barely – as a character study with Raby and Maud standing out among the bunch. It does have a few choice visuals and far fetched concepts to keep interests throughout and reaches a satisfying conclusion. For many, however, getting there may be too much of a bother. Proceed with caution. 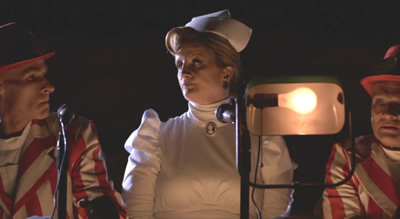 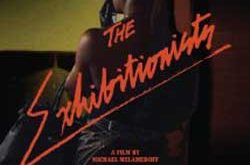 “Midnight Hour” sets off its own fireworks in July 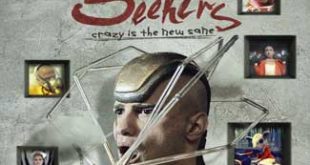