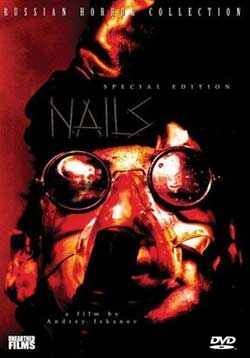 When a conflicted KGB assassin begins hearing voices inside his head, he decides to pepper his skull with nails to release the pressure. But with every new hole he drills, he dives deeper into madness. Now, to stop the insanity, he’ll have to go face to face with his inner demons, a task that means taking on the worst part of himself. Russian filmmaker Andrey Iskanov directs his feature-film debut.

Director Andrey Iskanov is an artist. His films at times defy logic and still manage to blend horrifics with beauty. The effort at hand is a film called Nails. Nails is not by any means meant for the mainstream. It’s purpose at first seems to be a form of visual assault and masterpiece rolled up in one. The stark psychological ride comes at you in a collage of preplanned oddities, camera work and editing which makes for a truly dynamic piece. Though beyond all that many will simply not get it. It was after watching the extras and the commentaries that the purpose of this film began to sink in. As it is told the film was inspired by reports of a man who had arrived at a hospital with nails driven in his skull.

While the art of trepanation is not myth, the logistics of the art is still a mystery. Individuals were said to drill holes in their head to release pressure or reach new spiritual heights.

The film begins as a Black and white piece used to represent the man and his gray existence. A professional hit man who has seen way to much violence arrives at his apartment not being able to shake the imagery of his work.

Upon reading an article in the paper our subject Alexander Shevchenko decides to delve into trepanation to relieve his suffering. The effects of the jarring self infliction begin to release his mind of these images and a color world awaits that becomes almost rose colored and muted. The headaches are exchanged for a strange new visual perception that produces hallucinogenic effects.

Out of this transformation the filmmakers chose to catapult the screen with image blasts accompanied by impact audios. The result is an editing work of genius that clearly is too art house for more casual viewers. Other experiences involve a segment of the film where Alexander begins to open up random canned food items. Each reveals an odd gelatinous mold filled with curiosities such as eyeballs, dead fish, bugs and other unmentionables. While the segment was intended to provide a viewer unease, the truth of the matter relates to similar issues which have occurred in the filmakers country that hands out cans of food containing mystery items at times. Alexander simply plays with them and contemplates the bizarre nature of his discoveries that easily sway any kind of appetite. 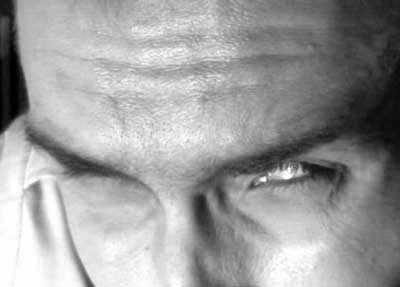 We watch as he delves deeper and hammers more nails into his head some even through driving them in per using a wall as leverage. This aspect is nicely done using cutaways to props and stop motion gags. Close ups provided of the procedure provide the more grisly shots of the film.

When he is visited by his girlfriend Irina Nikitinam, he is already way into the deep end and emerges from paintings of dead birds that suggests some sort of spiritual awakening. At this point the filmmaker shifts the visuals to suggest that Alexandeer has clearly altered his perception of the world and those he encounters. Irinna takes on the form of a mannequin that is enhanced with quick jarring moves and a rather plastic new look. The ending is most intriguing of all which summarizes the condition through discovery and revelation. 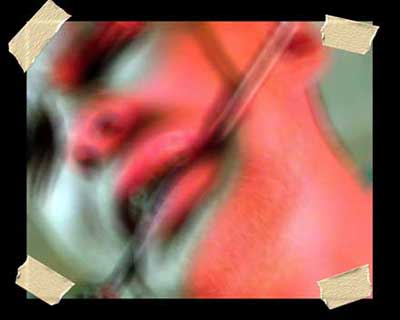 While I want to call this film a form of cyber-punk, it shares the similarities without the machinery aspect. Easily sections could find home in a music video or Nine inch nails experience but the purpose and premise are clear. Our perception is exactly that. To delve into regions that toy with briain matter is to transform everything that is to that individual. The process he endures ends up damaging 40% of this gray matter. A fantastical piece that offers viewers something rewarding to those who are tired of the norm. Creator Andrey Iskanov also edited, produced, wrote and created the visual effects for this piece which in reviewing was mostly an individual effort. 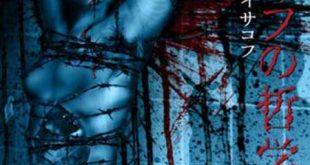