I am not only a columnist, sometime reviewer and hair club for men president but an actor as well. Working in the no budget world gives you a different view of movies. People are hard at work making movies for thousands rather than millions. People pack lunches or carry lights when not acting. It is filming at the most basic level. Some of the movies never get out of their home town or if they do maybe they shouldn’t. But once in a while some microbudget budget movies have something special to offer. In closely following the Buffalo movie community sometimes I get involved. What follows is my log from days I have shot on “Gore” which is a serial killer movie like the sort that came out of the ’70’s and 80’s with the unstoppable ugly monster of a killer and one man trying to face the monster down. I got asked to play the part of a burned out police detective with no people skills and anger issues. I hope it wasn’t written about me. 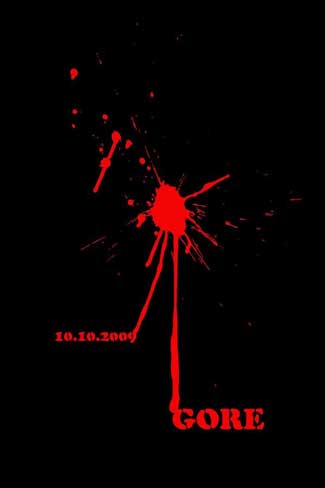 Day One
I think by this point there have been two other filming days which didn’t involve me. After spending a week whining to the director about the amount of pages we are shooting and how we were going to shoot this a month from now I drive out to get lost in Hamburg yet again. I really think a movie needs to be written with a hero who has no sense of direct and gets lost on the way to save the day.

We are shooting all the scenes with Alice (who is crazy and may have had something to do with the present day killings) at the “psych” center and video tape room. A small apartment is taken over by cast and crew and I find myself staring at a room with all white walls. “Oh my god” I think, “there is nothing worse than all white walls, blinding and boring all at the same time. Then they put up a green screen and I think “Okay I was wrong, there is something worse”. The space is really small, and the lights and the screen make the temp jump and there are too many crew. “Cindy’s” (the counselor) tape recorder was forgotten but thankfully I have one in my car which is made fun of as it is a large one but then quickly put to use. “Alice” and I do our staring contest with a line or two remembered to break the silence. I yell and beat up on “Alice” for a while and think this is the best relationship I have had for a while. 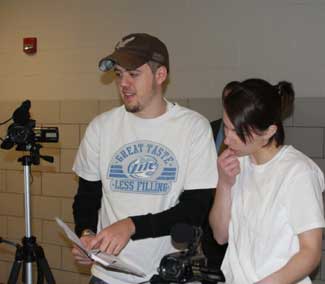 One of the crew tries to tell me how to say my lines and I wonder if I can get my blank gun to fire just once. “Fields” knows his lines, “Alice” wears handcuffs well, “Cindy” wants a nap and John keeps disappearing for “air”.
The day is long and tension builds and I am forced to do a commercial for auto insurance, which better make the outtakes. I swear, almost pull my pants off with my gun, and try to be bad ass with a straight face. Somehow everyone lives through the day. I limp home and wonder why I don’t have a hobby like stamp collecting. 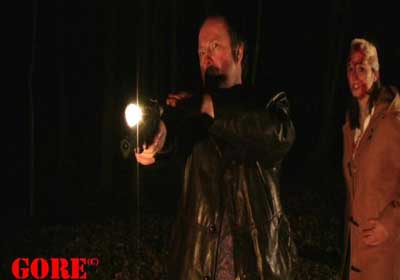 Day Two
After some time off for good behavior it was to be my second day of shooting. The scene was to be a flashback which takes place at the start of “Gore” and was set in 1978. It was my character’s first run in with “Gore” which I survive but turns my character into the burned out angry man that he is in. The original plan was for me to shave off my mustache and goatee and do some coloring to my hair to make me look younger. The scar I have on my head would be covered and I would have some makeup touch ups for my skin to make it look younger as well. Anyone who does low/no budget movies knows that nothing goes as planned. The schedule got switched and I was to be back for filming a week after the flashback which would limit what I could do as I had to match what we had already filmed in a weeks time. I looked for temp hair dye and the shortest I could find would be coloring that would last for about 10 washings, which was really too much. Adam said he would take care of it and found a darker brown hair spray which made me look like I was attacked with a magic marker but at this point it was really the only choice and it would be dark anyway.

When making micro budget movies you look for anything that will make your film a little different, something that will make it stand out. Some movies save their money and get a B level star for a day so they can market it as one of their films. The other way to go is to find a person with a name as a musician or a model and use the name value and they use the credit to show they can work in another medium. We had gotten lucky as a playboy model had moved back to Buffalo and was looking for movies to add to her resume. Angelina Leigh had agreed to do a cameo at the start of the movie (during the flashback) and this was one of the reasons this scene had to be filmed early. There were changes in our schedule and cast being added and dropped and we found ourselves without her due to scheduling problems. I had been looking forward to meeting her and saving a playboy model from a serial killer. Maybe she would have rewarded me, but alas it was not to happen. We were lucky that Sarah Reynolds agreed to take over the role.

The schedule continued to change and at one point we were going to start shooting at 4 am but as the cast looked for weapons Adam decided to shoot for a earlier time. 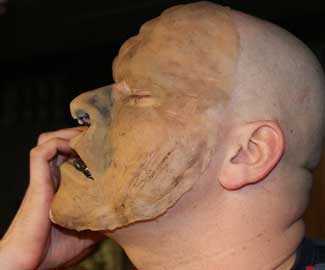 As anyone who worked with makeup knows makeup doesn’t normally get done on a schedule it is done when it looks right. I have seen makeup artists walk off films when they were told to film an effect they didn’t think was ready. This was the first real appearance of “Gore” in the movie, it would be the full makeup, not hidden, not a clay sculpture anymore. While the crew went to the woods to get the scene ready the makeup crew worked on getting the makeup right while being in a house that the owners wished them gone. After a few hours John “Gore” Renna, the co-director and I drove in a car driven by the half blind Gore, waiting to be pulled over by the cops as we drove into the woods. Surprisingly we all made it in one piece. But when John was backing the car up I was praying we wouldn’t drive straight off the world. Picture a long electrical line going to many lines of lights in a backyard that was closer to the neighbors than we had thought. The lights kept overloading the system and I had to stop someone from putting a fog machine onto the same line. It was close to 4 am, very cold and very dark as Gore chased his helpless victim through the woods.

The cold was affecting the makeup and it was slowly coming apart. A fix here and there and we kept on. The younger Sanders with his “just for men” dye job raced in to save the day and found himself in wet mud and clearly showing our hero had no clue how to point a gun. But at least I didn’t fall down and all the acting ideas of a younger warmer Sanders was lost in the cold night air as I tried not to freeze. We worked out that we didn’t have a second pair of jeans for Gore, so he couldn’t show the gun fire wounds tonight/this morning as there was more shooting to be done which would have happened before this scene in the movie. We decided we would have to do some reshoots and add a few effects. The rest of the crew drove off to the next location. Luckily I was able to get a ride, so I didn’t win the heart of the lady but her boyfriend got me back to my car (thanks man). I drove into the sunrise and to my warm bed, again wondering about stamp collecting for a hobby.

Day Three
We are shooting at a school in Hamburg for the hallways of the Metsburg Psychiatric Center. When you have a low budget you do what you can with location. The scenes we are filming are to bridge scenes we filmed on the marathon day which was my day one. Everything needs to match as closely as we can to that day of shooting. I know that my gun is different (light so it doesn’t pull my pants off) and my shoes are different so I can be comfortable but it is very unlikely that anyone will be able to pick up on these details.

We are also filming the attendant bringing “Cindy” into the Center. Other than me having some fun line problems (nothing that took too long) we had an easy day. The biggest issue was needing “Alice” to go home to get her costume so I could drag her out of the center. Really we had a good day, everyone’s spirit were high and we all had a lot of fun. This is probably the only easy day I will have in the shoot. We have shot a lot of my footage with only the crime scene, wake up call and final battle remaining (I am lying we also have to do some footage to match our night shot with me shooting Gore and Gore cutting me).

I drive home not thinking about stamp collecting.

The next filming day will be one of the hottest in town and of course it will have to match the coldest night.
Until next time.

Tags From the Nightshift gore 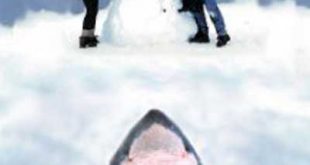