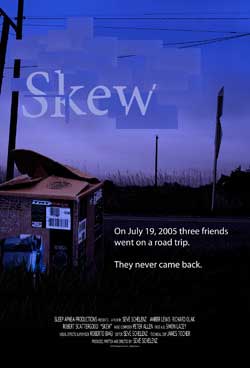 Three friends head out on a long road trip to attend a friend’s wedding. Right off the bat it is obvious there is some tension between Simon and Eva, and he seems to make things worse by bringing along a video camera and filming absolutely everything that happens during the trip. To his horror he realizes that when he films some people their faces appear distorted as he looks at them through the viewfinder and they end up dying soon after. It isn’t long before he starts seeing the deceased people while using the camera as well. Is there really something up with the camera or is Simon simply just out of his mind?

Just when you thought that the whole “found footage” horror genre was dead here comes “Skew” to prove you wrong. Shot in the same manner as “Cannibal Holocaust,” “The Blair Witch Project,” and a ton of others, this movie is shot from the point of view of Simon (or whoever else is operating the camera) as he films the things going on around him. I thought that it had a great premise, some genuinely creepy moments and a talented cast, but in the end I am not exactly sure how I felt about the film. It wasn’t horrible but at the same time I am not sure I would take the time to set through it again.

It starts out very, very slow and we are treated to a lot of scenes with the friends driving around looking at roadside attractions (such as the world’s largest chair), stopping to eat lunch, and just goofing off in general. There doesn’t really seem to be any point to most of the beginning of the film up until the point that they eventually arrive at a hotel (I think the bit where they hit the coyote is supposed to be important too but to be honest it just seemed unnecessary to me) and Simon begins to realize that there is something up with the camera. From there we are treated to the same old, same old, (he keeps filming people who have distorted faces who end up dying, he becomes increasingly more unstable, his friends refuse to believe him, etc). This goes on for the remainder of the movie until the flashback at the end which is supposed to be a twist (I think).

I think that my biggest complaint about the movie is the fact that Simon continues to use the camera even though he knows there is something wrong with it. He offers a lame, half-ass explanation for continuing to use it at one point, but I thought that it was silly and pretty unbelievable. If I had a camera like that I sure as hell wouldn’t keep using it, and would probably just throw it out of the window which is what one of Simon’s friends suggest at one point (not that he believes him but mainly because he gets sick and tired of Simon filming every single thing that goes on while he whines about how there is something not quite right about the camera at the same time).

There were some good things about the movie too. I thought that it had a pretty original premise (even if it was poorly executed) and the filmmakers tried something a little bit different. I also liked the cast for the most part, especially Richard Olak who played Rich. Simon (Robert Scattergood) was annoying as hell for the most part (I think if I had been in the car with him I would have shoved the camera up his ass after about an hour of him sticking it in my face constantly), and Amber Lewis was pretty good as Eva (but what the hell was up with the clothes she was wearing? Did she think she was in the 1970’s or what?). I also dug the fact that there were some pretty unsettling scenes that will no doubt creep some people out (the bit where Simon sees the guy running along beside the car comes to mind as well as does the chick he sees briefly toward the end walking across the parking lot toward him). For the amount of flaws that “Skew” had it also had its share of things that worked, so it was very hard for me to totally dismiss the film entirely.

While I think many people will like “Skew” I just had a lot of trouble getting into it. There are way too many scenes where nothing important is taking place, the film itself is almost too long, and by the end things just seem to fall apart totally as if the filmmakers got tired of messing with it and just wanted it to end. The “twist” at the end doesn’t quite work and I am not really sure why it was even included in the film. It isn’t the worst film I have seen recently, but as I as said earlier I don’t think I will be in any big hurry to watch it again. Check it out at your own discretion, but keep your expectations pretty low. 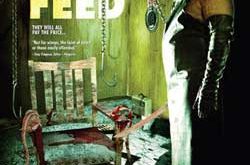