“Cthulhu Blues Productions (based in Arkansas) and Crow-Nan Productions (based in New York) have wrapped principle photography on their latest feature film collaboration ‘Sineaters’, a dark action story of violence and redemption. Principle photography occurred in the city of Conway, Arkansas. Sean-Michael Argo directed this Bekah Kelso script, with cinematography by Leo Smith. Post-production is presently underway. 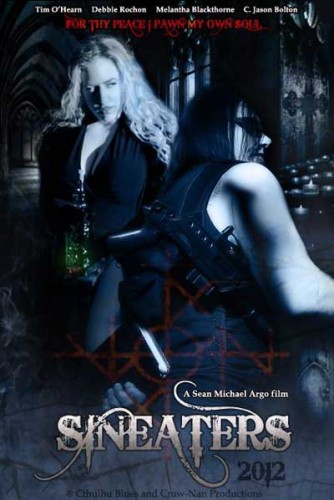 Sineaters is the story of a lone drifter who has come to the end of a violent and bloody journey. He has the power to consume the sins of evil-doers, and the power to heal with his hands, part faith healer and part gun slinger. He loses the spiritual struggle with the Grim, a manifestation of all the evil he has removed from the world, and is turned against his sineater comrades by the cult known as the Vessels of Wrath. Working with a twisted preacher, Brother Aaron, and a darkly alluring woman who seems to guide the preacher’s every decision, the sineater hunts down his friends one by one, as the battle for his soul rages on.