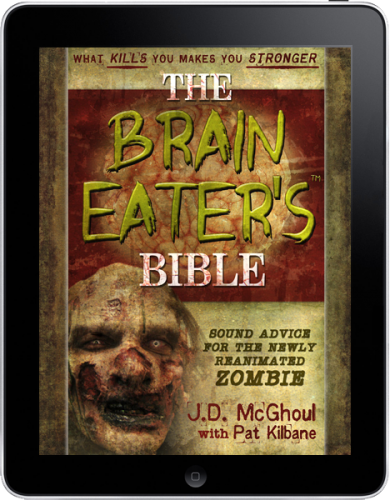 How did you go from being in Day of the Dead to creating The Brain Eater’s Bible?
On the “Day of the Dead” shoot, I spent weeks in prosthetic zombie makeup, and since most of that time I was just waiting around for my scenes to shoot, I had a lot of time to think. Something about being in a zombie guise for that long made it grow on me. I started speaking as a zombie and developing a zombie world view, and before I knew it I had created a character distinct from the one I was playing in the film. Here is some video of me messing around in the makeup trailer, on my way to discovering zombie author J.D. McGhoul:

The multi-media iPad App literally brings your book to another level of entertainment, could you tell our Horrornews.net audiences and zombie fans what they can expect?
First and foremost, it’s a fun, cool read as a book. All of the iPad bells and whistles wouldn’t have meant much if the text itself hadn’t been executed with care. It’s basically one zombie’s story, and the wealth of practical knowledge he acquires in his brain-eating travels. Even as a conventional hardcover, the book is getting great reviews. What I love about the iPad app, is it allows you to really wander around in that world. Everything is full-color and all of the images are interactive. For every page of the book in portrait view, there is a bonus content page in landscape view with the videos, animations, and additional zombie information. There is a diagram of the human body that you can touch to discover the bleed-out time for a bite to that spot (morbid, no?); a spinning 3D model of the skull shows you where to best access the brain; a picture of some handguns becomes a scrollable arsenal with each weapon’s vital statistics. You can play with it for hours!

What kind of content is on the videos?
Most of the videos are musings and bits of additional advice direct from the zombie author. Among other things, he tells you how to cope with the trauma of having become a man-eater, and demonstrates the skull penetrating power of a nasty hand tool. There are also some cool animations, like a view of the PACE virus attacking a human cell and turning it into zombie tissue, and “playbook-style” moving schematics of zombies ambushing human prey.

What are the zombie martial arts sequences?
I used to read a lot of martial arts books as a teenager and loved the idea of having a section that teaches zombies self-defense with sequential photos, just like the old Bruce Lee books. The self-defenses are legitimate, too, designed by a combat tai-chi expert specifically for creatures who like to bite, and whose only vulnerability is their head.

How can this App help me deal with a zombie apocalypse?
If you’re a zombie, it’s a complete how-to book; if you’re an uninfected human, it’s like having captured the enemy’s field manual.

How dirty did your hands get when doing research for this project? Like, If I ask you what does it feel like to chomp into a brain, can you answer that question with confidence?
I kind of wish I had eaten brains just so I could say I did, but my research in that area was still pretty thorough. I read extensively and spent a long time interviewing brain surgeon Dr. Sohaib Kureshi of San Diego. He has handled so many human brains both in surgery and in laboratory environments, he could tell me which brain parts were creamy and which were grainy; which were fatty and which were tough. He was very particular in telling me how bloody a mess it would all be. Is it wrong that this kind of information made me giddy?

Who would most likely use The Brain Eater’s Bible?
The book and app were created for the rare few zombies who have retained their intelligence and bodily speed. Yes, most zombies are slow and stupid, but some escape that fate, and McGhoul sees those individuals as having a burden of responsibility in the war against the uninfected. There is a specific reason that certain zombies are high-functioning, but you’ll have to read the book/app to find out!

What is your favorite zombie movie? Why?
I hope it doesn’t seem too pop culture for the HorrorNews.net audience, but I just loved Zack Snyder’s remake of “Dawn of the Dead.” Some people didn’t like the fast zombies and some thought it felt too much like a music video, but that movie was everything I hope for when I see a zombie flick. I believed the way its fictional suburban world unraveled, and I loved the creepy touches, like the zombie girl who pads into Sarah Polley’s bedroom. There was Andy sharpshooting from the roof of his gun store, the fat lady in the wheelbarrow, the redneck shooting two-fisted while his buddy drags him through the sewer by his collar. It was awesome. And the zombies were absolutely ferocious. When I walked out of the theater into the crowded mall, I thought I was going to hyperventilate.

You were on MAD TV for awhile and I’m curious if you were ever able to incorporate any horror themes into your skits during those years?
You know, when I think back, we did quite a few science-fiction themed sketches, but not many horror. When “Halloween: H20” was out we did “H90210” with me as Luke Perry running around killing people in a Michael Meyers mask. We also did a Halloween/zombie dance sketch called “Schpooky Potty.” But the only one that I remember working was “Traffic Apocalypse” where a team of news reporters are trying to remain professional while a full-blown biblical armageddon was unfolding. Since Mad TV, I’ve written a number of horror sketches that I’d love to see produced someday.

Here’s your bonis question,
I’m a fan of Bizarro Superman and I really dug the whole Bizarro episode of Seinfeld. I’m currently engrossed in the television series Fringe which tackles the subject of other dimensions. Can I get your expert opinion on a bizarro version of our world?
What a great question! I picture a Bizarro America where politicians politely discuss ways to reduce our massive budget surpluses. 11/9 would be national Day of Remembrance, commemorating when Bizarro Bin Laden’s men infiltrated the United States and volunteered at a New York animal shelter until every last puppy found a home. During such a tough time, I guess I see Bizarro World as people simply prospering and getting along. It’s no wonder I fantasize about becoming a zombie. 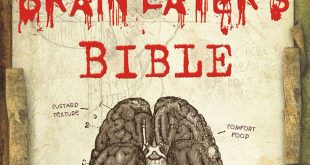 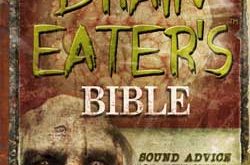