Can’t get enough Troma in ya?  Well good news is that not 1 but 2 new films are heading your way, check out the slick and weird new art!


Father’s Day Synopsis
A long, long time ago in a town north of Tromaville, there was a bad, bad man who raped and killed dads. Nobody could stop the fat monster until a mysterious stranger took a stand. Some say he was avenging his own father. Some say he was just crazy. The stranger could not have known the Hell that was to follow…

Toxic Avenger Synopsis:
“Unlike Superman, who never seems to age, Toxie gets older with each movie. In The Toxic Avenger Parts II-IV, he has gotten married and had children. Now he’ll have to deal with his wife’s menopause, his erectile dysfunction—which is a constant erection—and his rebellious kid. We’re on to the next generation, like Star Trek. We’ll see a little of Toxie’s twins in kindergarten, and then as teenagers. The son is rebellious, while the daughter is ultra-politically correct. We’ll show her going through puberty, which should be the most colorful monthly cycle ever put on film! We want to focus on the father/child relationship, and the generation gap. There is also a villain who wants to rename Tromaville Scheisseville, and Fangoria and other independent media will be prominently featured!” 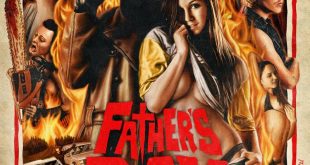