SYNOPSIS:
“A carnival barker displays a sideshow freak called the Feathered Hen and tells her story. Cleopatra, a trapeze artist with the carnival, is adored by a midget named Hans. Frieda, Hans’ fiancée (also a midget), warns Hans that Cleopatra is only interested in him so that he will give her money. Cleopatra has an affair with Hercules, and when Frieda lets it slip that Hans is to come into an inheritance, Cleopatra and Hercules plan to get the money be having Cleopatra marry Hans. During the wedding reception, Cleopatra is accepted by the freaks, but is revolted and mocks them. The freaks decide that they no longer need Hercules in their carnival and have a new career for Cleopatra all lined up, and make sure she doesn’t ‘chicken’ out.” (courtesy IMDB)

REVIEW:
Unusual for a Hollywood film, Tod Browning‘s Freaks (1932) was banned outright for many years. This was mainly because it uses circus freaks (real ones, including Siamese twins and several hydrocephalics, some of them deformed so grossly that it is difficult to imagine how they came to be alive at all, such as the man whose body stops at the base of his rib cage) to pose the simple question, “What is normal?” Cleopatra (Olga Baclanov) is an attractive normal-sized circus trapeze star who is worshiped by Hans (Harry Earles), a dwarf engaged to marry another midget (played by his real-life sister Daisy Earles). When the trapeze artist discovers that Hans is wealthy, she agrees to marry him, and later attempts to poison him. The circus freaks find out, and they take terrible revenge. 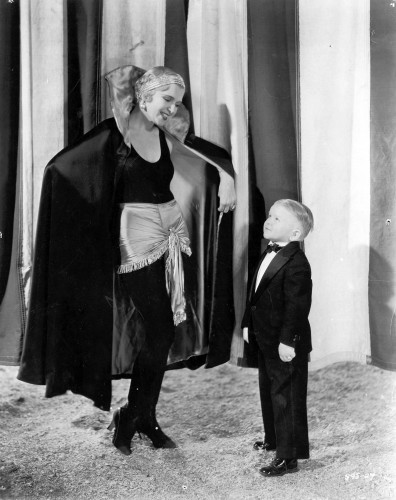 The story may be melodramatic, but it is triumphantly justified by the poignancy with which the film’s point is so succinctly made, that normality is in the eye of the beholder. It is the lovely trapeze artist and her strongman boyfriend who are psychologically abnormal, because they are affectless – that is to say, they do not have ordinary human feelings. In contrast, the freaks very quickly come to seem like ordinary people, except they are a little more vulnerable. This justifies Browning’s decision for which he was much criticised, to use real freaks. It is, in fact, a very humane movie and, oddly enough, it manages to make the freaks appear normal without either patronising or sentimentalising them.

They are, of course, very conscious of belonging to a specialised group, but no more than other oppressed groups in the real world. Their cheery chant of “One of us, gooble gobble, one of us…” as the loving cup is passed around at the wedding reception is not welcomed by Cleopatra, appalled at the very thought of being one of them. Of course, the film is too tidy in a way, in that a freak is exactly what she becomes – the other freaks in the Grand-Guignol ending pursue her through mud and rain (the limbless ones rolling and wriggling towards her in a moment of awe-inspiring dark surrealism) and transforms her into a chicken-woman covered in feathers, with one bright, staring eye. This had been judged to be in bad taste, too grotesque in a film that is otherwise touchingly persuasive about normality in the most unexpected surroundings, but such a criticism is perhaps a little pompous. The film is designed as a black comedy rather than a tragedy, and the shock ending with its amusing-yet-appalling image – one that even Salvador Dali might have been proud – is surely more wickedly funny than anything else. 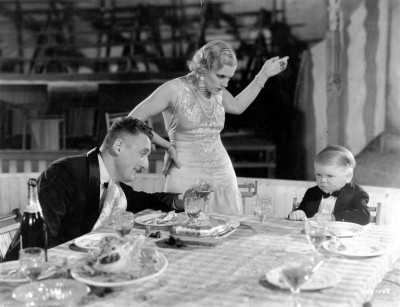 Freaks is probably Tod Browning’s best film – certainly much better than Dracula (1931). It’s compassion and relaxed friendliness towards the freaks no doubt comes from his own early days in the circus. Interestingly, the film (apart from its surgically-implausible ending) is only horror because we think of freaks as being horrific – the whole thrust of the film is to force us to redefine horror. MGM did not see it that way. Horrified at the film, they cut it heavily, perhaps by as much as twenty-five minutes, and inserted a mealy-mouthed and inaccurate prologue about famous freaks of history which, stunningly, lists several fictional characters among them! We may never know what was lost. The original may have been more disturbingly dark – it certainly included a scene in which the strongman is castrated, a point which is now difficult to deduce from the remaining film. 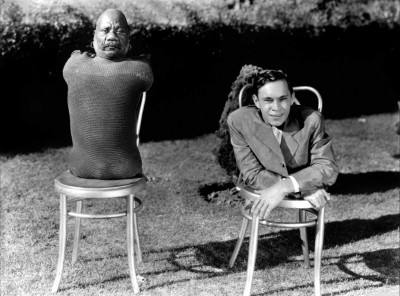 It is because of the freaks that the film has had so much trouble with the censors, but there is no film from the period that has more sexual innuendo. The relationship between the two normal people, the very sexy Venus (Leila Hyaam) and Phroso (Wallace Ford), is most peculiar. “You’re a pretty good kid,” she tells him. He agrees, adding the unexplained line “You should have caught me before the operation.” We don’t know what went on when Venus shared the strongman’s trailer, but the strongman’s relationship with Cleopatra is not all that subtle. Even the Hilton sisters take part in the suggestive humour. Oddly, Browning chose not to exploit the sexual possibilities of Joseph/Josephine, the half-man/half-woman. 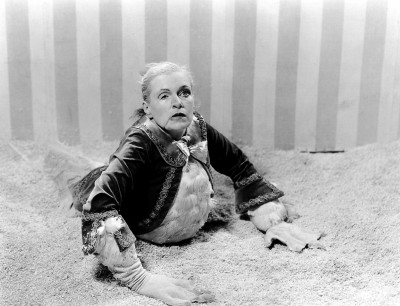 As to the morality of using real freaks in movies, students of such ethical questions could do worse than to study Browning’s film in relation to two films of the seventies: Brian DePalma’s Sisters (1972) and Michael Winner’s The Sentinel (1976). The Sentinel, where the freaks are used to symbolise a world of monstrous evil, is pure sadistic exploitation of the worst kind. Sisters, however, is arguably acceptable. Again, the freaks stand for the ‘abnormal’ but this time in a context where the film’s ‘normal’ heroine is being brought face-to-face with her own abnormality. But that’s another story for another time. Please join me next week when I have another opportunity to make your stomach turn and your flesh crawl with another lusting, slashing, ripping flesh-hungry, blood-mad massacre from the back side of…Horror News! Toodles! 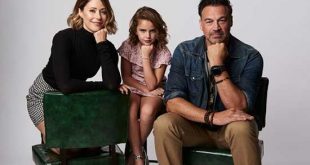 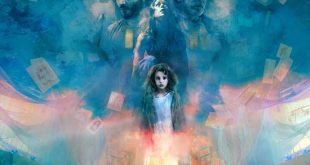