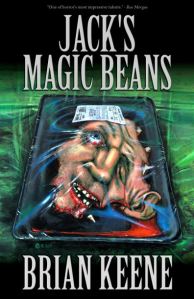 I eagerly await every new Brian Keene release. Without a doubt, I am a huge fan as should you be. This man is amazing and to date I have yet to read anything that has not totally blown me away and I’m glad to say that the streak continues with Jack’s Magic Beans.

Jack’s Magic Beans is not a new story. As Brain will tell you in the afterwords of the short story, it originally appeared in a long out of print selection titled UNHAPPY ENDINGS which you couldn’t get your hands on even if you tried so for all intense and purposes this version now out from DEADITE PRESS is first run material for most all of us.

Jack’s Magic Beans is a collection of short stories full of what Brian does best – placing folks in harrowing situations and then watching them squirm. The bulk of the collection is the novella Jack’s Magic Beans which tells the tale of a small group of survivors of some type of horrible outbreak. Stranded in a grocery store freezer they deal with the carnage left behind and the fears that the unknown brings. It is a classic theme that Brain has explored in several of his novels but one that this long time fan never tires of watching him mess with. As with most novella’s Jack’s Magic Beans ends abruptly and leaves you wanting more, much more. Perhaps Brian will revisit Jack and his small band of survivors and we can find out what happened to him in the horrifying new world which they find themselves inhabiting. This story is disturbing, scary, intimidating and horrific in short, it’s damn near perfect.

What follows next are four equally disturbing and twisted tales, Without You, I Am An Exit, This Is Not An Exit and “The King” In YELLOW. All four are great stand alone works but I really enjoyed the center two, the two EXIT stories. They do go together and both deal with a serial killer we will call the EXIT killer. He is traveling the interstate committing a murder at every exit along the way. Although both tales are about the same person they are told from different perspectives and with a flare and vision that only Keene could muster. He states in his afterward notes to these stories that the EXIT killer will return soon and I hope it’s true as both these stories although short really grabbed me and I must read more.

These new releases for DEADITE are the first for Keene is a while as he has found himself in a bit of a mess with his old publisher Dorchester who has apparently been up to no good. You can head on over to Brian’s site HERE and get the low down on all the shenanigans but it looks like he’s found himself a great new home at DEADITE and they are bringing his work back out to the masses. From what I’m reading it appears that Dorchester may still be out there attempting to sell copies of Brian’s books that they shouldn’t be. Point being, make sure you’re getting the copies from DEADITE PRESS when you buy. The best way to do that is to CLICK HERE and head to the DEADITE site. From there you can click on the BUY NOW links and have them shipped from Amazon.com.

They have a ton of great horror to read through there and the best news is that they now have a large and ever growing number of Keene works to sort through.

Start with Jack’s Magic Beans and don’t look back. It’s a quick relentless onslaught of horror the likes of which you will never forget. 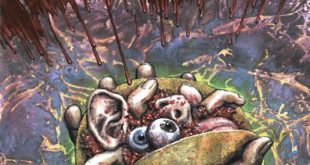