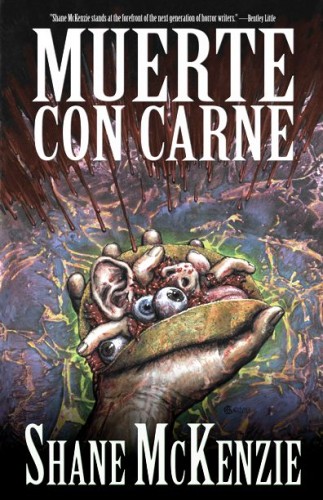 When you’re a horror writer, and blurbs for your book are being written by Jack Ketchum and Edward Lee, you know you’re doing something right. This is definitely the case with Shane McKenzie, a writer who is absolutely tearing up the extreme horror landscape. The guy has written twelve books (at least, maybe more by the time I finish writing this review), not to mention at least two collaborations with other authors (Sixty-Five Stirrup Iron Road being one of them), a comic book (Zenescope’s Tales From Oz, issue #3), a short film (M is for Matador, directed by Gigi Saul Guerrero and featured on ABC’s of Death 1.5), and still has time to be the head editor over at Sinister Grin Press. With Muerte Con Carne, he has also created a monster that joins the ranks of infamous troubled-kid-turned-vengeful-monster favorites such as Victor Crowley, Jason Voorhees, and even Leatherface. He wears a luchador mask and pulverizes his victims, and his name is El Gigante.

Muerte Con Carne starts with a particularly vicious scene that foreshadows just a bit of what we will be in store for (a scene that is currently being made into a short film by Luchagore Productions called El Gigante). A man who had been trying to sneak his family into America wakes up in what he soon realizes is a wrestling ring, only this one has skulls in place of turnbuckles. Human skulls. It also has El Gigante in the opposite corner, a hulking beast of a man who quickly smashes his victim, pounding him into submission and beyond. Remember when Brutus “The Barber” Beefcake would cut his opponents hair after defeating them? Well, El Gigante cuts them into pieces.

Cut now to our main characters, our “good guys,” if you will, Marta and Felix. Marta is an angry girl who has constructed a plan to document the brutality inflicted on illegal immigrants trying to come to America and start a new, hopefully more successful, life. She is at times cold and harsh, and other times honest about her inner turmoils. Felix, on the other hand, is somewhat of a lost puppy dog who happens to be madly in love with Marta. So when she explains her plan to him, to pretend to be an illegal immigrant and try to get caught by the border patrol, he wants to stop her but ends up joining in with her plan. They soon find out they have far worse evil to contend with than the border patrol.

Muerte Con Carne has often been compared to The Texas Chainsaw Massacre, but with a Mexican spin to it. I don’t disagree, but I feel like it’s also much more than that. The characters that Marta and Felix run into, from the “who cares” sheriff to the macho tough guy at the taco cart, then over to the sleazy, perverted hotel manager, all push the story into another realm of horror. Sure, Leatherface and his family were killing the people who came up to their house and turning around to serve them up as food. But Gigante and family have a far more insidious scheme going, one that all but assures them of never getting caught while still preying on the weak, scared, and lost. Then they’re turning them right back around as a treat for the unsuspecting (?) locals. Menudo, anyone?

Shane McKenzie’s style is fast paced and in your face, able to explicitly detail the break-neck action as well as the building tension of the story. He manages to create characters in Marta and Felix who we are annoyed by due to their attitudes and faults, but ultimately still care about as things start to go bad. He also creates some of the most hideous, ugly antagonists I have read in some time. Apart from the afore-mentioned El Gigante, one of the most impressive “bad guys” in recent memory, you’ve got his family, the people behind the scenes of the evil, who are each equally repulsive and disturbing; Cristobal, the gold-toothed, woman beating scumbag, and Alma, his sister/mother of his baby. Rogelio, just a young child, but when you see what he carries around in later chapters, you’ll get chills. And then there’s Mama, an old woman who keeps the family together and keeps the townspeople happy with her “special” recipes.

I recognize that I am leaving out a lot of details, but I feel like Muerte Con Carne is one of those books that just keeps building the tension and the horror with each turn of the page, and to say too much might ruin your experience. However, I will say this: the tension and the thrills continue to escalate all the way through to the end. If you’re not on the very last page, you haven’t experienced every horror Shane McKenzie has in store for you. And there is a sequence in this book that is so horrifying, so intense, that I’d put it up against the opening intensity of Suspiria in terms of its “WOW!” factor. I know, how do you compare a scene in a movie to a printed page? Just believe me, it is crazy, and you’ll definitely know it when you come to it.

Shane McKenzie is a writer to watch. His prose is smooth and crisp, enough detail to vividly paint you a picture, but not so much it bogs down the action of the scene. His gore is top of the charts, no hold barred, horrifying, which is exactly how we want it. And I have a feeling, much like his counterpart, Adam Cesare, that he is just getting started. Yes, you should go out and pick up Muerte Con Carne right now. You should keep an eye out for the short film based on the first chapters, if only to see your nightmares come to life on your tv screen. And while you’re at it, yes, you should probably grab a couple other titles of his. If you like your horror extreme, red, and gory, this is your guy.