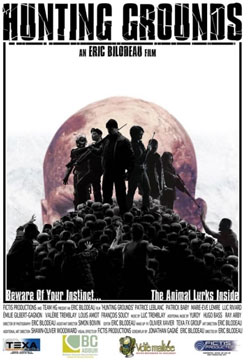 In Earth’s future nature has to rebuild itself, in order to let the planet do all of the work citizens are kept inside of sealed up cities. Most human beings have never even seen a real blade of grass instead they spend their time using the AlterNet as an alternate reality. What happens when a group of gamers decide they are tired with their virtual hunts and want to go on a real one? I wonder if that military experiment that’s gone awry and caused the dead to come back to life is going to affect them in any way.

“I didn’t envision this trip to become so complicated.”

Eric Bilodeau’s Hunting Grounds is a low budget film set in a future that doesn’t seem that hard to believe. During Hunting Grounds credit sequence the viewer is treated to hearing the history of what has happened on the planet Earth. Human beings have used up a lot of the resources of the planet and now nature simply has to rebuild itself. In order to let nature rebuild itself human beings are now kept inside of locked up city states, only 98% of the worlds population has ever had any real brush with nature in this new world. A new form of entertainment known as AlterNet has also been introduced to the citizens. Alternet allows its users to exist in a virtual reality, so realistic that most human beings never even leave their house. Alternet allows its users to play games or simply to visit with each other so it is entertaining and functional at the same time.

Alternet and its hunting games has started to leave main character Paul Austin quite bored. He and his cyber girlfriend Lexa have been doing the cyber hunts for some time and the thrill is gone. Paul wants to get out of the city state and into the forest so that he can actually go on a real live hunt. Lucky for him he has found a way out of the city state mainly due to his friend Sebastien who is the son of Conrad Mathieu an agent of national security.

Paul meets with Sebastien and another one of their friends to discuss the plan for their real life hunt. The friend although interested simply cannot do it. This is the first time in the film that we hear about the punishments one can get for leaving the city states. Some of these punishments are pretty light such as two years of community service; others are pretty strict like twenty years in prison. The men are about to do something highly illegal and there needs to be a group of four plus a guide in order to go through with the plan. Paul figures he has Lexa and Sebastien but the friend canceling has left them an empty space. To fill that empty space Paul suggests they use the man they know only as Redlinx for the trip. Redlinx has helped them on several virtual hunts and is a pretty good shot, now all the group needs to do is a find a tracker.

While the group is planning their trip out into nature the viewer is granted a glimpse at it via a military compound. Apparently in the future body piercings aren’t frowned upon so much since Lt. Michelle Mason has a rather large spike going through her eyebrow. At the military base some experiments have been going on involving regeneration of tissue. After a test is performed in front of all of the agents of national security a horrible accident occurs at the base. A large vat of the serum used to regenerate has spilled into the ground around the compound causing the dead bodies that are buried near by to suddenly start clawing their way back out of their graves.

Sebastien informs Paul that he has found them a tracker and they decide on a meet up spot. Lexa shows up at Paul’s apartment and it is obviously the very first time she has ever been there. She is baffled by just how realistic AlterNet’s visions were since she feels like she has been there before. Director Eric Bilodeau goes into this detail several times in the film. The people in this future are so dependant on AlterNet for their communications that even the smallest thing like another human being touching another can set them off in a panic state of mind. The alternate reality has also caused some tension to grow between Sebastien and his father Conrad since the father constantly only chooses to see his son using the alternate reality.

The group begins to meet up and they meet their tracker, a man named Simon Roy. Simon doesn’t come off as a very friendly person, but he does own his own truck and he has obviously done this several times before. While the group is starting to pack their equipment a strange woman approaches the group. The woman introduces herself as Redlinx, she explains to the guys that the reason they believed that she was a man is because she used her brother’s avatar during their AlterNet sessions, her real name is Francine.

Francine is a ticking time bomb from her initial nervousness when meeting the group. The group realizes they are about to do something highly illegal, in order to get out of the city state the group is posing as agents of national security using Sebastien’s father’s connections. Just what are they going to do however when they get out into the wilderness and find that the wild animals aren’t all they have to worry about?

I really think I would have enjoyed Eric Bilodeau’s Hunting Grounds more if there weren’t zombies in it. The zombies really don’t play that big of a part, and in fact most of the sequences that involve the living dead look like the kind of film clips that would be used in video games. The make up on the zombies however is very top notch and they do look pretty good for the budget of the film.

For the budget of the film Hunting Grounds really does look good. The future city state looks stunning and the use of color and sets really does sell the setting. There is however a huge overuse of cgi effects in Hunting Grounds, mainly with dealing with the destruction of zombies. These cgi effects really do begin to hamper the film, particularly near the end when zombie’s heads are blown completely off. Most of the early sequences however aren’t hampered by the cgi, in fact it seems to help the look of the future society and the AlterNet universe.

The main plot twist of Hunting Grounds occurs when the group gets out into the wilderness and they suddenly find that they really can’t trust each other. The group begins to turn on each other and instead of hunting the wild game as was originally intended they start to hunt each other. I like this idea and I really do wish that Eric Bilodeau would have focused more on this and left the zombies out of the equation, they just really didn’t seem like they needed to be there.
Along with the overuse of the cgi Hunting Grounds soundtrack also leaves a lot to be desired.

The cast for the most part handle their roles very well, although Patrice LeBlanc who plays Paul does come off as wooden in several scenes including what could have been a great fight sequence near the end of the film.

Hunting grounds has a lot of good ideas and a very fresh look, I just really don’t think the zombies or the whole military base experiment gone awry subplot needed to be there to. 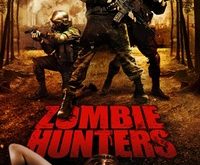