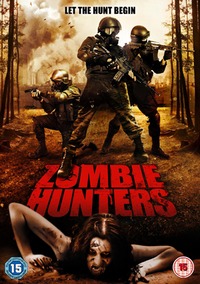 In this future, nature is restricted and virtual games now provide both the landscapes and the hunting grounds. A group of hunters will make it outside for a traditional hunt

Ya hey dare, got a zombie movie out of Canada, Quebec to be precise. The plot goes something like this – A couple of video gamers decide they want the real thing, to actually hunt. They’ve done all they can in the virtual world and want to step up their game, excuse the pun.

So they get a group together and hire a guide who just happens to be a homicidal, no nonsense, psychopathic bully that winds up causing dissention in the group hating one of the kids as well as our movie hero, a square jawed ass kicking Canuck. For the record there’s a male and female hero / heroine part in this flick but the focus is mainly on the dude.
It just so happens that our friends to the North choose the wrong place to go hunting and end up in the middle of woods where the Armée Canadienne (Canadian Army) has a top secret weapons / research facility chock full of high tech gadgets and weird chemicals, the former being the reason for the impromptu zombie attack, well not yet, towards the end of the movie. I know, yet again another zombie movie where the real meat of the action doesn’t happen till close to the end. Is this a trend, I hope not…

Zombies attack our intrepid group of hunters and bite one of the girls. A Lieutenant in the Canadian Army has secretly been watching the group hidden not too far away from our two dudes, two girls and whack nut male guide. She’s trying to discern why they’re here and if they’re a threat. She winds up joining the group but our crazy hunting guide decides he’s better off on his own and why not try to kill everyone in the group as well. It’s a badly written script, what can I say?

So now they’re holed up in a cabin in the woods trying to hide out from the hunting guide and the zombies as well. Come to find out, one of the kids in the hunting group, the one that the guide didn’t like, his dad happens to be head of the research program working with the Canadian Army. He runs off and ends at said research facility. Decked out in his tech gear and armed with a hi-tech shotgun, he still winds up getting killed and eaten by, yep you guessed it, the not so polite and no so well made up zombies.

I won’t tell you how it ends but there’s a fight between our hero and the nutty guide, a showdown at the research facility and a lot of angry Canadians killing zombies. Here’s where we’re at here. “Zombie Hunters” looks like something that the “Chiller” channel would show, maybe “Syfy” as well. In other words, the movie is big time cheese, well made enough that the “Hastings” or “Best Buy” chain stores would sell.

Overall I found it entertaining, not great, but, it got the job done. The movie was shot in and around Quebec, a heavily French province of Canada, so, the accents were thick and at times hard to understand or maybe I’m just deaf from all the metal concerts I’ve been too. And it had subtitles which I hate in any movie let alone a low budget horror flick but thankfully they were few and far between. 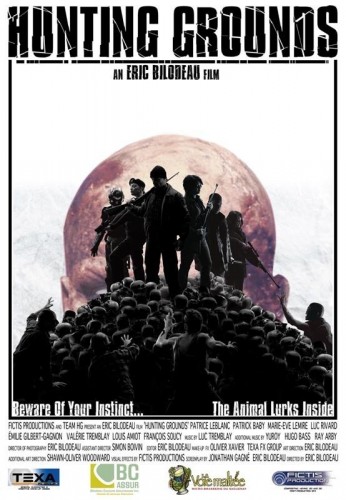 The special effects were bad, not just poor but BAD. The blood was watery and looked like H2O with sparse red food dye added to it. The zombie makeup was, for the most part, awful. There were a few cool looking creatures but the vast majority looked like it was done by the sixth grade art class from Washington Elementary school. And gore? A little bit, mostly guts, didn’t care, didn’t do anything for me.

I wanted more action, more zombies throughout the entire movie but didn’t get it. Had a few in the beginning, few more in the middle and then a lot at the end but they weren’t scary. They were actually kind of pathetic. Wait for this movie on cable, not worth buying nor renting…. 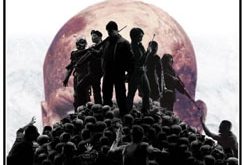