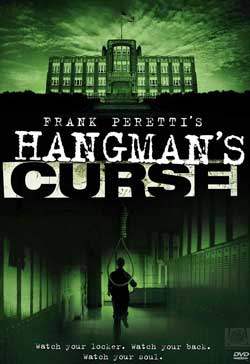 Unspeakable evil stalks the hallways of Rogers High School. As fear runs rampant, a family of investigators tries to identify a deadly power that’s claiming students one by one. Nate and Sarah Springfield and their two teenage children go undercover to root out the evil, but will their own resourcefulness protect them from harm … and from their own prejudices?

Hangman’s Curse is a 2003 Christian horror film starring Leighton Meester and Douglas Smith. It’s based on the 2001 novel of the same name by Frank E. Peretti. After a family (David Keith, who plays Nate, Mel Harris, who plays Sarah, Leighton Meester, who plays Elisha, and Douglas Smith, who plays Elijah) handles a drug bust, they’re hired to investigate a curse that’s been going around a school ever since the suicide of a student named Abel Frye ten years earlier.

The movie opens up with Abel Frye hanging himself at school because of all the bullying. Ten years later, people (mainly jocks) are have breakdowns and screaming, “ABEL FRYE!” Legend has it that Abel Frye’s ghost haunts the school and takes revenge on behalf of the goth kids on anyone that they curse. (They curse people by drawing a hangman in their locker.) Later on, after a family (the stars of the movie that were listed above) completes a successful drug bust, they’re hired to investigate the school.

This movie is very good. It presented the problem at the beginning and then went at a nice pace to solve it. We weren’t just thrown into the plot. A lot of horror movies do that and it sometimes doesn’t give us enough time to enjoy the movie and being scared.

The acting was great. Everyone did their part. It was cool seeing Frank Peretti do some acting. He’s very good. We’d like to see him do some more acting. Likewise the actors in the family who investigate the drug busts are all very strong presences. If Peretti hasn’t already reused these characters in another novel, their return certainly would be welcomed.

At their worst, ghost stories devolve into simple tales of supernatural versus body count leaving the audience wondering why the characters on screen don’t just leave the abandoned house once the walls start growling at them. At their best, ghost stories are an examination of the human condition. What motivates a personality to the point of obsession beyond death? What drives people to put their lives in danger to figure out why certain locales are haunted? Hangman’s Curse is a story akin to the latter of the two. The question of whether or not there is a curse is unraveled at the correct pace, and the resolution fits in quite well with the story arc.

A word to the arachnaphobic, there are spiders in this movie, and not of the CGI variety. These are real, large, aggressive eight legged predators, and there are lots of them. If someone hasn’t done this already, we need a list of the scariest spiders in cinematic history (preferably without accompanying pictures) and Hangman’s Curse deserves a place of honor near the top. Rafal Zielinski directed this movie and he knows how to get a frightening performance out of tarantulas.

The message of teens picking on each other was a good woven message that they had in there. It wasn’t cheesy or too much, it just showed what making fun of someone can do to them. The movie never explains why some teens do it, they just do. It’s not right or fair and this movie shows that.

It is a curious notion how teenagers and horror blend so easily. There is something in the chemical makeup of an adolescent’s brain which causes them to retaliate against authority. Perhaps that’s where the predisposition toward horror stories stems. The teenager is no longer trusting the world (if they ever did to begin with) but they have yet to discover the power to take charge of the unfairness in which they have landed. Take Carrie as a metaphor for post pubescent angst. Or look at The Craft as an allegory of irresponsibility. The tales of horror are endless in this age bracket, and very easy to make resonate with an audience who has dealt with puberty, assuming the rating system works (yeah, we know, a big assumption).

Bottom line, Hangman’s Curse is a winner. It’s the mystery/horror/thriller hybrid it claims to be and although there’s a Christian message involved, it’s not too much, so anyone can enjoy it.