REVIEW:
If you didn’t get the hint from the front cover, then your surely gonna put 2 and 2 together rather quickly in this goofy rated x horror romp. Driller XX, a parody of Michael Jackson Thriller, takes on a whole new meaning to the word weird, sexy and rather unbelievably absurd.

This 1984 movie surely is hard to watch without rolling your eyes a dozen or more times as it makes a major play on not just Thriller but Michael Jackson himself. The intro concert fully choreographed against some obvious Billy Jean music and the worst singing I’ve ever heard is hard to believe as something that a film production team came up with. Our Michael Jackson spoof is named Mr. J played by…well an actor credited as “Hot Star” who belts out an awful song that is tainted with Jackson-like lyrics and dance. Our main star Angelique is leader of his fan club and has attended a local concent with her geeky boyfriend.

This film is 100% spoof and really deserves a watch if you can sit thru the p*rn. I was amazed that films like this exist as they are so bad at times there good. It makes you wonder where the Michael Jackson pr team was in letting this one slip by them without defamation of character but then again spoofs are exactly that and it makes fro some pretty good iconic entertainment. Get a dose of the opener music number. It;’s sure to make you cringe and laugh. My only question is …….is there a soundtrack floating around to hand out as gaga gifts to those you love. Weird, p*rny (now there’s a word!) horror fun with some darn dang awful songs and hairy beaver action to boot. 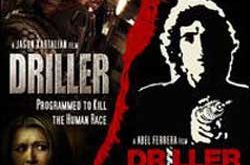