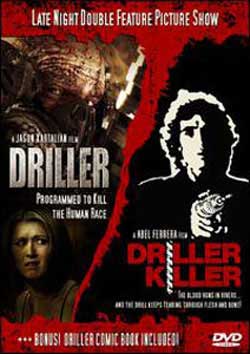 A dark and amusing tale of alien abduction, drugged up youth, drilling and killing.

I love a title that is straight to the point (no pun intended) This movie has been floating around here and there for awhile, that I’ve often wanted to check out but kept getting put on the back burner. So once I received a special re-release that included the film “Killer Driller” as a bonus film, I knew it was time to get my Drill films seen once and for all. Driller will strike a weird chord to viewers as it combines professionalism with amateurism. While, it’s apparent right away that it’s a low budget production, it still manages to be inventive with some interesting camera work and special effects.

The FX work is surpassing at times that really exceed the look of the film. Other shots are cleverly constructed from reversals and chop edits to make the desired gags work like a charm. The other sense I got at times was that it reminded me a bit of Saturday Afternoon old Sid and Marty shows, with some basic approaches to filmmaking that seemed to jump back and forth between the 2. The story is pretty basic. An alien comes down, abducts and transforms an unwilling participant hick to join his army by killing off humans with an electric drill. The transition is pretty cool, but the idea is a bit of stretch between lame and workable. Beyond that, it gives the killer a good reason i suppose for drilling into people brains.

Now we cut to the participants in this film which includes an obviously lame heavy metal act that is tying to make a name for themselves and deal with their recent eviction. We also have the 2 couples who on their date weekend decide to occupy a hideaway cabin. This includes Jennifer, Maggie, Chuck and Steve. Chuck and Steve are on a simple quest to get laid while there 2 dates end up being a contradicting pair of prudish and easy. The reasons for being there are pretty shallow and typical of these type of films which as we can guess are future targets for the Driller maniac. “Driller” as we’ll call him, sports a industrial mask wearing overhaul and a drill that never sees to run out of power. The metal group band mates are the comedic relief that are also just targets waiting to be drilled into. We pretty much end up in a remote location, a band that gets stranded, 2 couples that just happen to be there and the driller maniac who comes out of hiding to do some damage. 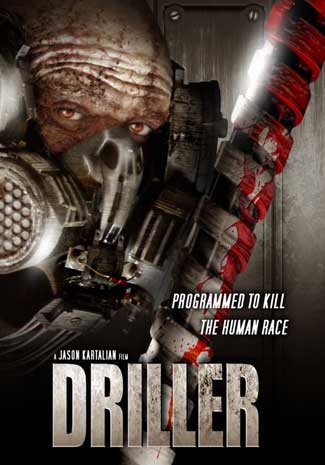 The gore scenes are effective done which brings a nice balance to the paint by number script. Driller is written and directed by Jason Kartalian, which at the moment seems to be his only film project. The movie made its way into some video rental locations and has a certain entertainment value that is hard to put an exact finger on. I think by most standards the production and script will lose a few people but will also gain a few based on the positive aspects of the production. In all, it has a pretty inventive alien meets an segment and des some pretty nasty damage to the actors in the process. I’ll leave the rest up to you to decide if you get time to check this one out.