Home | ‘Fall Down Dead’ June 14 and the Picasso Killer

‘Fall Down Dead’ June 14 and the Picasso Killer 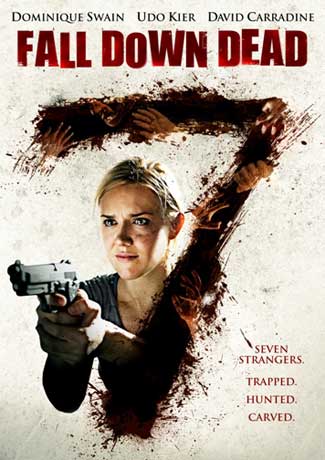 Police are on the trail of a serial killer – following clues that are as barbaric as they are “artistic”. They have called the criminal the “Picasso Killer”: death is his inspiration, the carved bodies of his victims are his works of art. On June 14 Image Entertainment will release Fall Down Dead, a terrifying journey through a city caught in the grips of a madman and his misdirected “skills.” Fall Down Dead will be available on DVD for an SRP of $27.97, as well as available via digital download for $14.99

Christie (Dominique Swain – Alpha Dog) does not know it, but she is being stalked…by someone who doesn’t know her, yet is obsessed with her. His name is Aaron Garvey, known as the “Picasso Killer” (Udo Kier – Blade, Halloween): a madman whose victims are just sketches, as he prepares to make Christie his bloody masterpiece. One Christmas Eve, he discovers his ultimate prey, as Christie is heading home from work. Most businesses have already closed, but she is able to take refuge as she persuades a security guard (Golden Globe® nominee David Carradine – Kill Bill 1&2) to let her into an office building. Fueled by his maniacal creativity, the killer follows…and the game of cat-and-mouse begins.

A cold-blooded serial killer…a police force with nothing to go by but his shocking handiwork…a body count that is climbing…what can Christie do before she becomes the next victim to Fall Down Dead?